With the possible exception of pizza, there is no greater complement to marijuana than television. After all, it’s called couch lock for a reason. And the love flows both ways, as the drug has become a staple of contemporary television, inextricably linked to shows like Weeds, Broad City, The League, Parenthood and most adult-oriented animated fare. Marijuana-related storylines have also fueled memorable episodes of modern classics like The Office (“Drug Testing”; Season 2 Episode 20 - Netflix), Freaks and Geeks (“Chokin’ and Tokin’"; S1E13 – Netflix) and Curb Your Enthusiasm (“Carpool Lane”; S4E6 – HBO Go), among others.

But pot plots have been a staple of “very special episode” family pap, quasi-topical cop shows and comparatively edgy network comedies since the very dawn of television. In honor of this hoary plot device, we put together a streaming playlist of weed-related television episodes from the pre-legalization 20th century.

Seemingly the earliest reference to cannabis in a streaming-available show comes in this 1961 episode of the apple pie series about a small-town sheriff (Griffith) and his spasmodic deputy Barney Fife (Don Knotts). No, Aunt Bea and Floyd the Barber don’t trade dabs while Opie and Andy are off at the ol’ fishing hole. Instead, the plot revolves around Barney harassing a quiet, shifty-eyed loner for no good reason (ah, police abuse of powers … always good for a wholesome chuckle), suspecting the guy of growing marijuana when he sees him tilling the fields at night.

More paranoid fascist dementia, only updated to Los Angeles in the late 1960s and played with the straightest of straight faces. Joe Webb’s tight-ass Detective Joe Friday was famous for slam-dunking hippies with one closed-loop rhetorical argument after another, but this 1968 episode deals specifically with the insidious evil of marijuana. “The finished cigarette is called a joint. It sells on the street from 50 to 75 cents. The seller claims its heaven; the buyer soon finds out its hell.” 50 cent joints? No, yeah, that’s heaven. A worried father wants Friday to arrest his daughter, a fresh-faced suburbanite who argues for marijuana legalization. The cops don’t find any evidence, but in Friday’s world, where there’s no smoke there’s always fire, and soon enough the young mother is fishing her dead baby out of the tub following a “wild pot party.” 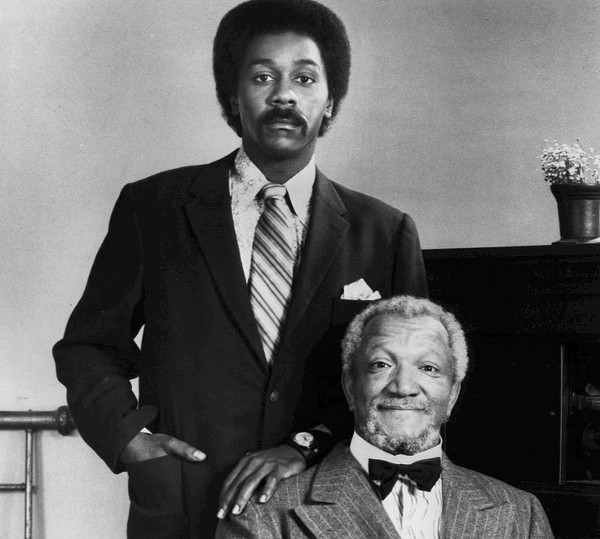 Note to self: binge-watch all six seasons of Sanford and Son as soon as humanly possible. Even with star Redd Foxx missing due to a protracted contract holdout, this episode is a gold mine of dig-it wordplay (“Before we turn it in, why don’t we do a little turnin’ on?” says son Lamont’s friend Ronald) and epic putdowns. Grady is taking care of Fred’s garden while he’s away, mistaking bushels of cannabis for wild parsley, and accidentally feeding a salad full of the stuff to a couple of cops (that wouldn’t get them high, but whatever). “I’ve been eating a lot of salads lately, you may have noticed I’m getting lighter,” says the white cop. “If you get any lighter, you’ll be transparent,” says Ronald. Belly laughs like that abound.

Never a show to shy away from recycling a used plot, Three’s Company essentially remade “Fred’s Treasure Garden” in this Suzanne Sommers-era episode (the show was such a ravenous recycler that it returned to the weed well in the Season 7 episode “Going to Pot”). In this iteration, Jack Tripper and the gang are railroaded into clearing out Mr. Roper’s garden, only to discover that the wild flowers they picked are actually cannabis. While Jack makes an ill-considered attempt to turn the pot leaves over to the police, Mrs. Roper unwittingly grabs some for her flower-arranging class. Unfortunately, this is a bit of a dud episode, with distinctly low stakes and very little of the show’s trademark horndog innuendo.

I never quite “got” this single-set detective comedy from the mid-1970s, but this particular episode is pretty solid. Wojo brings a tray of brownies baked by his new girlfriend into the station, unaware that they’ve been laced with hash, and soon enough every cop on the force except for Barney is tripping major balls. There are some great moments for Jack Soo’s Nick, who becomes obsessed with the word “mushy,” and a clever integration of the side story about a feuding actor and critic who grow captivated with the “very Chekhov-ian” scene unfolding in front of them.

A spate of drippy, doe-eyed, anti-drug bromides plastered TV screens throughout the mid-to-late 1980s, and this treacly, shot-on-film sitcom was such a product of empty, Reagan-era fanaticism that the episode is actually called “Just Say No.” Punky and her friend are initiated into a sixth grade girl gang called the Chicklettes, where they dress up “like pint-sized Pointer Sisters,” endure harsh initiation rituals and get offered hard drugs. The lead Chicklette pulls out a box that contains “some grass, a few uppers and a little nose candy,” but Punky resists, eventually leaving the gang to form her own Just Say No club. This time-capsule-from-hell episode ends with footage of eight year-old star Soleil Moon Frye leading a real-life Just Say No rally in Atlanta, which is upsetting on a number of levels.

It’s probably no surprise that the most inane and inscrutable moral compass with regards to drugs comes from this aquamarine and hot pink early 1990s nightmare/beloved institution. Hollywood star Johnny Dakota comes to Bayside High to tape an anti-drug commercial, befriending Zack and wooing Kelly in the process, but the gang is shocked to learn that their matinee idol is a secret stoner. Their moral outrage is so outsized that they refuse to appear in an anti-drug commercial, because “we felt it was wrong to be part of his lie.” Whose side are you even on, kids? In my favorite scene, Zack and Slater confront a bathroom toker, but find that he’s only smoking harmless tobacco. “That stuff can kill you, too,” admonishes Slater. What do you mean, “too?"

Basically the exact same episode served three different ways – Mom and/or Dad finds a j-bone in the house, but they don’t know which child it belongs to, which leads to a lot of hand-wringing about parental responsibilities and the imminent threat of things that you’ve read about in the newspaper. All three episodes are epic bummers (the 7th Heaven episode about broken family trust is only resolved when the parents eavesdrop on their child’s prayers), although at least Blossom brings a touch of self-aware ribaldry to its dreary message-mongering. The lessons are all the same, though: prison-warden parenting works; drugs are literally being forced on children at school; there is a direct line between smoking your first joint and selling your ass for a single hit of crack; and so on.

Similar to the above “very special episodes” in its pandering attitudes about marijuana (coming from Tim Allen, no less…he’s like a real-life Johnny Dakota here), but this Season 7 installment of the long-running, long-unfunny sitcom is also an outlier in that the child is an eager smoker rather than a mere patsy. In fact, the first half of the episode is structured like a mystery – Tim finds a bag of weed in the backyard, and so he and Jill set up a sting, staking out their children from Wilson’s backyard. As in the 7th Heaven episode, the Mom fesses up to being a teenage pothead who only stopped when her friend died from using the stuff, which is just insane.

The ultimate marijuana-related bottle episode – Roseanne uncovers drugs that she thinks belong to her daughter’s boyfriend David, only to find that it’s her own twenty year-old weed, eventually sparking up with her husband Dan and big sister Jackie in an attempt to recapture their irresponsible youth. There is a wealth of peppery dialogue (“That’s just great, Dan, a very fine example you’re setting for the kids, stealing their mother’s stash.”) and physical humor (Goodman’s giddy hop when he realizes they’re going to smoke the pot) in this gem from the tail-end of the show’s prime.

None of the six insufferable lead characters on Friends were known for getting lit, although you have to imagine it might have made Chandler a little bit less of a complete pile of human garbage. Weed is super tangential to the plot in this Season 1 episode, which mostly revolves around Chandler reexamining his life after getting a promotion at his soul-sucking job. However, the B story involves Monica preparing a fancy dinner for a prospective employer (a cameo-ing Jon Lovitz) who “blazed up a doobie” in the cab ride over. Meanwhile, the C story, concerning Ross learning to talk dirty to his new girlfriend, made my skin crawl. 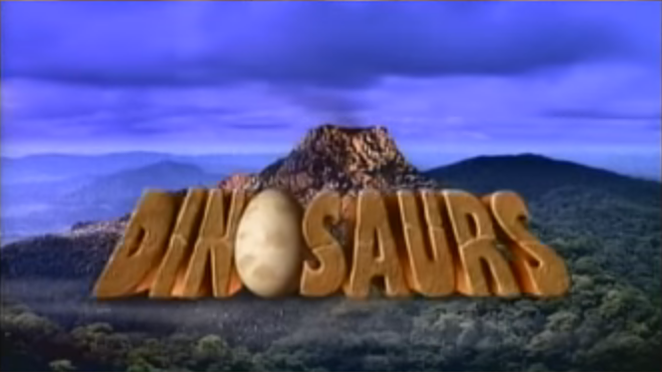 As though this Jim Henson Creature Shop-designed show about domesticated dinosaurs wasn’t punishingly surreal enough, this brutally unpleasant episode concerns a mood-enhancing herb known as “Plant.” The dino-family’s teenage son discovers the joys of Plant when he spots it growing wild in the woods and uses it to bond with his grumpy and overbearing father Earl. It’s not long before the entire village is hooked on Plant, blasting Hendrix and slacking off from work. “What could be bad about something that makes you feel good?” asks Earl, before deciding that “throwing away everything real and lasting in our lives for a cheap high has a downside.” This show was made for children, by the way.