This First Thursday and Friday, local aesthetes will want to be on hand at UTSA’s Terminal 136 for a promising duo of MFA thesis exhibitions. The artists exhibiting, Kallie Pfeiffer and Justin Korver, offer up their own visions of the human condition and the social construction of reality in exhibits respectively titled “Pageant Wounds” and “Accessories of Modern Men.” Pfeiffer’s photographic installations, which delve into the delicacy of existence, contrast well with Korver’s multimedia ruminations on contemporary manhood as expressed by the objects that accompany it. Free, 6-9pm Thu-Fri, Terminal 136, 136 Blue Star, (210) 458-4391, art.utsa.edu. — James Courtney

In a simple yet brilliant move, R Gallery is looking back at the recent past to tease the future. In a new exhibit aptly titled “Hindsight,” curator Rigoberto Luna has selected works from 16 male and 16 female artists who’ve shown in the space over the past year. The works on display are thus representative of a superb year for the gallery that San Antonio Current readers voted their favorite back in 2013. Featuring artists like Ana Fernandez, Justin Parr, Jenelle Esparza, Ed Saavedra and other familiar names, the group show gives platform to a variety of different voices, experiences and styles. Free, 6-11pm Fri, R Gallery, 725 S. Presa St., (210) 862-8875, facebook.com/rgallerystx. — JC 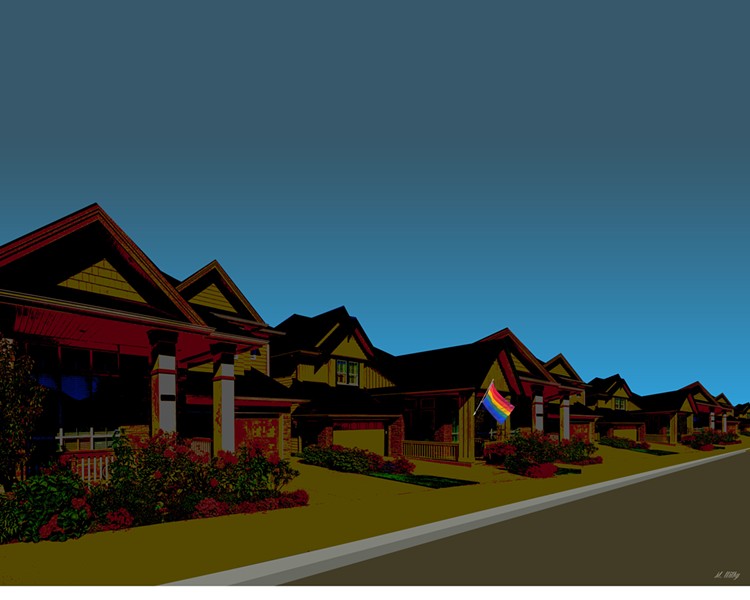 Let’s try and forget that earlier this year former Saturday Night Live actor and anti-vaccine quack Rob Schneider lent his voice to the title polar bear in Norm of the North — one of the worst animated films in recent memory — and also starred in Adam Sandler’s equally God-awful Netflix comedy The Ridiculous 6 late last year. Hell, besides the “makin’ copies” dude he played during his four-year SNL run, a cameo in a 1996 episode of Seinfeld and his role in Home Alone 2, let’s forget most of his career. But stand-up is a different art form, so maybe he’ll surprise us. You can do it! $27.50-$35, 8pm & 10:15pm Fri-Sat, Laugh Out Loud Comedy Club, 618 NW Loop 410, (210) 541-8805, lolsanantonio.com. — Kiko Martínez

In 1975, A Chorus Line marked a turning point for Broadway — it’s one of the first shows to broach homosexuality — and paved the way for other groundbreakers like Rent. Set at a dance audition, the musical spotlights the individuality of dancers vying to become part of a homogeneous chorus. This contrast demonstrates that even the background players have struggles and dreams, and the show as a whole is a cathartic experience for the audience and performers alike. Tim Hedgepeth directs The Playhouse’s production, with a reception following Friday’s opening night performance. $12-$30, 8pm Fri-Sat, 3pm Sun, The Playhouse, 800 W. Ashby Pl., (210) 733-7258, theplayhousesa.org. — Kelly Merka Nelson

Pianos face grim prospects in their final years — humid garages, demolition by teenagers, the Craigslist unknown. With his Classical Music Kegger series, Austin composer Nathan Felix offers a more productive retirement, refurbishing the instruments for his lush compositions and for donation to low-income schools. Writing for six pianos, Felix adopts the style of Steve Reich, with overlapping lines of polyrhythm and harmonic texture. After
a first kegger in Austin, he teams up with the Chamber Orchestra of San Antonio at the former A. Grona Mattress Factory. Free with RSVP, 7:30pm Sat, The Mattress Factory, 1903 S. St. Mary’s St., electrochestral.com.
— Matt Stieb

With the added bonus of Free Comic Book Day on May 7 (freecomicbookday.com), this weekend beckons area nerds with Cyber City Con, a celebration of all things robotic. Organized by the masterminds behind Alamo City Comic Con, Cyber City Con invites guests to explore the cybernetic nuts and bolts that make up this stellar fandom while browsing for comics, toys and rare collectibles from local vendors or attending panels featuring artists and voice actors (from Transformers and Evangelion, among others). The fun starts with a “Cyber de Mayo” kickoff party on May 5. $15-$125, 10am-7pm Sat, 11am-6pm Sun, Marriott Plaza, 555 S. Alamo St., (210) 229-1000, cybercitycon.com. — Solomon White