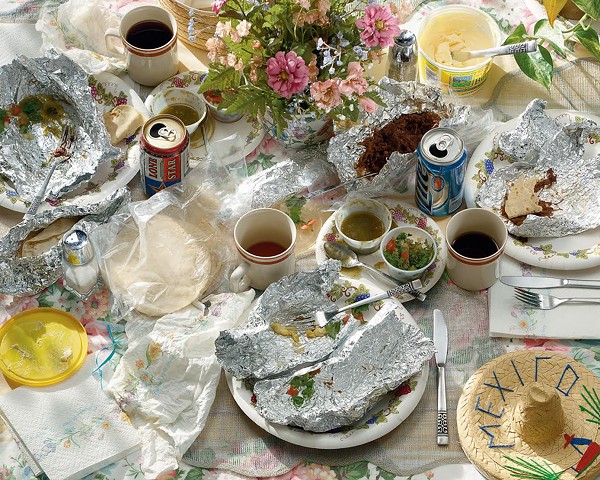 “[Ramirez and Liberto] have enormously supported and influenced the growth of a vibrant Blue Star Contemporary and the rich art landscape of San Antonio,” according to a Blue Star press release.

Ramirez, who has had work displayed in national and international collections, died in 2010 due to a bike accident. His avant-garde photography explored cultural identity, consumerism and mortality.

In his popular photograph “Seven Days: Breakfast Tacos,” Ramirez captures what what some San Antonians may find themselves confronted with after a Tex-Mex breakfast: Cans of cheap beer and black coffee decorate a table, while taco-less, crumpled aluminum foils accent the scenery. The Smithsonian American Art Museum purchased a version of the photograph for the institution’s permanent collection

Red Dot will host an auction where edition six and seven of “Breakfast Tacos” from Ramirez’s “Seven Days” series will be sold. Pieces from “Dust Collection and Other Tchochke,” “Careyes” and “Words” will also be offered at the fundraiser.

Red Dot will feature over 80 artists at the event. The fundraiser’s proceeds will support the museum and Casa Chuck Residency, a nonprofit program that provides a space for critics, curators and writers.