"Profiling Made Visible" Weathers the Storm on Opening Night 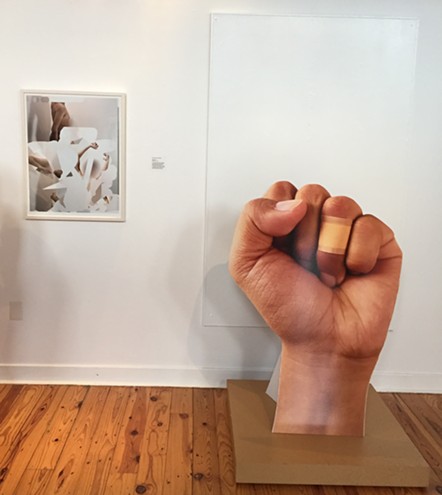 Sometime this past Saturday, before the early summer storms pushed the opening reception of "Profiling Made Visible" and all of its accompanying fruit plates inside to the gallery space, there was a calmness in Bihl Haus Arts. Inside the small historic stone building located in Primrose at Monticello Park Senior Apartments, visitors were quietly milling around and meaningfully observing the deeply personal and political artwork. The event was a beautiful launch for the community art center's celebration of Pride Month, showcasing the fraternal multimedia works of Mark Anthony and Michael Martinez and kicking off four weeks of art events surrounding their exhibition.

This perceptive installation features pieces from both the brothers, both individual and collaborative, that examine and  their intersectional identities. The exhibition can be best understood in terms of collisions: how whiteness collides with Mexican-American identity and creates racial bias and subjugation, how Caucasian queerness collides with queer latinx (a gender-neutral term used to identify those of Latin American descent who identify outside of the gender binary) and nonwhite persons and erases their own identities, and h0w these nonwhite and queer identities collide with American society and the justice system. 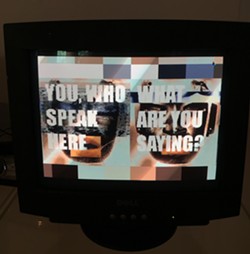 The two Martinez brothers are alums of Brackenridge High School and SAY Sí, and both received BFAs in Intermedia from the Pacific Northwest College of Art, two years apart. The large gallery space feature their works on in the large single room, plus two performance art pieces that were relocated from the outside pool area with the rain's onset.

David S. Rubin, an independent curator who helped to organize "Profiling Made Visible" explained his enthusiasm for this show. "These guys are young and they're doing work about issues that are so important and relevant," he remarks. "That's what I look for and gravitate towards." Rubin had met the two brothers separately without knowing that they were related and was impressed by their advanced conceptual art and the ways in which their work addressed and dialogued with the current American political landscape. He looked them up online and was enamored with what he saw. As a resident of the nearby Deco District, Rubin has had a long relationship with Bihl Haus Arts and curated their June show last month. He's also going to host a Dialog with the Martinez brothers on June 18 to "open up more discussion to help people understand where the artists were coming from."

This understanding of cultural background is central to the exhibition. Mark Anthony Martinez, the elder brother, explores issues of racism and domination in his art, predominately through the use of color and beige juxtaposed against white. His piece Paper Cut examines how something as simply commercial as a Band-Aid can expose itself as being manufactured for whiteness. In the same vein, Mark Anthony's Above It All features pinkish-white helium balloons suspended in the rafters of the space, alluding to racial profiling and white people's freedom from this targeting. His side of the room continues to play on this color divide, with walls painted in "beige rage" and affixed with googly eye paintings to expose the irrationality of colorist bias.

Michael Martinez's pieces interrogate more the ways in which whiteness threatens their latinx identity. Three of their video pieces were grouped together in one corner of the room, all seeking to explore the boundaries of their queer Mexican-American identity and its suppression by white queerness. Their video Whitewashing the Rainbow explores the historical revisionism done in the recent "Stonewall" film, that erased the roles of important queer and trans people of color in the riots. Screened beside this on another TV is his Know Nosotrxs piece, featuring footage of an Aztec sacrifice along with text that calls awareness to a "Chicano Movement 2.0*" with respect to its recognition of a new latinx label and the embracing of genderqueer, non-binary, and trans peoples.

Even the bathroom of the gallery had a collaborative work by the two of them, a listing of  the names of trans women who have been recent victims of violence on the bathroom mirror, in a piece called Say Her Name. As America is currently embroiled in a national debate about the rightful use of bathrooms, this site-specific installation in was particularly unsettling in its timeliness.

"Profiling Made Visible" will be on display until July 9th on Fridays and Saturdays from 1 p.m. to 4 p.m. or by appointment, but this is just the beginning of Bihl Haus Arts' celebration of Pride Month. Every Saturday of the month will feature a different event at 2 pm with the Martinez brothers, including a talk called "Queer Disclosure: Identity, Biopolitics and Medical Practice" by Will Robertson and a Queer Poetry reading. More information about the events is available here.