While she didn’t get to croon as much as she probably would’ve liked as the track-suit-wearing villain Sue Sylvester on the hit TV series Glee, actress and comedian Jane Lynch has found a way to make up for it. Currently on tour with her cabaret-style comedy show See Jane Sing, she pulls out all the stops.

“We dive into the American songbook,” Lynch, 55, told the San Antonio Current during a phone interview a few weeks ago. “We do everything from Irving Berlin to Nicki Minaj. We go all over the place.”

Joined onstage by her friends, actress Kate Flannery (TV’s The Office), vocal producer Tim Davis (Glee) and the Tony Guerrero Quintet, Lynch plans
to entertain audiences with her own renditions of everything from “Far from the Home I Love” from Fiddler on the Roof to Minaj’s 2014 hip-hop single “Anaconda.”

I’m assuming “Anaconda” made it onto your set list because you sang some Nicki Minaj on Glee, yes?

Yes, I sang “Super Bass,” and I freaking loved it! I became such a big fan of hers. When that “Anaconda” video came out, I thought the world had just stopped. It was amazing and so cool. I thought it would be great if three very uncoordinated white people attempted that song with great, unfounded confidence. And we do. It’s the highlight of the show, and it comes out of nowhere.

Have you been to San Antonio before?

You know, I just visited San Antonio for the first time. I have a nephew who got married there. So, now, I have relations.

Besides “Anaconda,” which song in the show do you think San Antonians might enjoy the most?

Actually, we do have a song that’s Spanish, which probably won’t go over well with the Mexicans, called “The Skeletons of Quinto.” It’s a retrospective of the Spanish Civil War.


Oh, do you sing in Spanish?


A little bit — very horrible, broken Spanish. You’re going to love my butchering of the language.

Was See Jane Sing born from the fact that you didn’t get to sing as much as everyone else on Glee?

Maybe deep down inside it was a reaction to that. But I had done Annie on Broadway (she played Ms. Hannigan) and the people from 54 Below in New York approached me to do four nights at their cabaret. I said, “Well, I don’t have a show, but I’ll get one!” It’s grown immensely since that little cabaret show. Now it’s a big extravaganza.

It’s been a little over a year since Glee went off the air. Have you had any withdrawals or has it been an easy transition to move on?

It’s been easy to move on, but that’s the way I roll. I’ve been doing theater for a long time. You put your heart and soul into something and sometimes it closes the second night. Sometimes it closes after six months and you just move on. I’m used to beginnings and endings. I don’t suffer them. 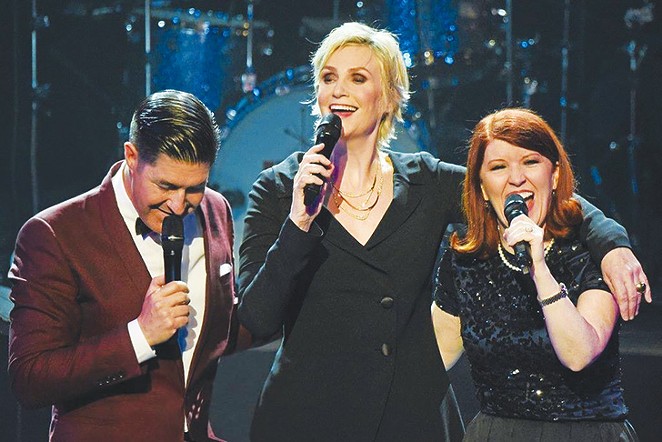 Do you think there is a gap that needs to be filled by another TV show that gay teenagers can identify with?

I would love that. It’s just a matter of time before everyone is really relaxed about someone’s sexual preference. But I know that it is still really tough for some kids, so I wish there would be a Glee 2, maybe with a whole new group of kids at a different high school. I think that would be a wonderful thing.

At the end of Glee, we find out your character becomes vice president to Jeb Bush in 2020. Do you think Sue could get along with Donald Trump and be his running mate this year?

Oh, absolutely. (Laughs) I think she would be the only person that could do it. I think they’d be at each other’s throats the whole time. They’d probably destroy each other.

You both say some pretty offensive things, so it might be an interesting ticket.

I’m a big fan of your Christopher Guest comedies: Best in Show, A Mighty Wind and For Your Consideration. Can you tell me about your role in his upcoming Netflix film Mascots?

Indeed! What I am is an ex-mascot. I was Minnie the Moose for a junior college baseball team, but I had a devastating injury. I pulled my thigh muscle, so I can no longer be a mascot. I held the splits way too long. So, now I’m a judge and judge the mascot competition. It was a joy to work with everyone. It was so much fun. It was like keeping a balloon in the air.