In the realm of astronomy, the summer solstice marks the maximum tilt of the Earth’s axis towards the Sun, a phenomenon that results in the longest day of the year. This midsummer occurrence happens twice a year, once in each hemisphere, when the Sun reaches its highest point in the sky.

The occasion marveled the ancients and sparked a number of holidays and celebrations in pre-Christian civilizations. As a cultural happening worldwide, the solstice came to be viewed as an opportunity to look towards the future while simultaneously reflecting on the past. While pagan interpretations of the celestial event have subsided, such rituals are still observed today.

In the backyard of San Antonio’s very own metropolis, the Summer Solstice Film Festival takes place in the rural town of Kingsbury, Texas. Approximately 45 minutes away from the hustle and bustle of the Alamo City, the second annual film festival is hosted by Habitable Spaces, an artist residency that doubles as a sustainable farm, trading post and experiment in collective living.

Curated by San Antonio-based artist Ethel Shipton, this year’s lineup incorporates a visual scavenger hunt of short films projected onto unexpected surfaces. For instance, visitors will find a continuous loop of a film by Justin Korver that portrays a man mopping a yellow vinyl floor hidden somewhere in the residency’s kitchen. They likewise will discover a series of striking visuals recorded by national artist Chris Sauter displayed onto a window near a fire pit.

Alison Heinemeier, a founding director of Habitable Spaces alongside Shane Heinemeier, explained in an interview with the San Antonio Current that this interactive viewership allows for the screening of short films before the nightfall of the summer solstice: “A problem is that the summer solstice is the longest day of year … How do you show projected videos in day? You put them in dark spots like in trees, floors, et cetera. Everyone came up with idea, and [Ethel Shipton] ran with it.”

“This untraditional form of thematic curation is different from other film festivals,” said Shipton. “It’s more subject to environment, where [viewers] are physically engaged by views of space.”

The proceeds of the Summer Solstice Film Festival will benefit the development of three tiny house structures for artists arriving to Habitable Spaces in the fall. 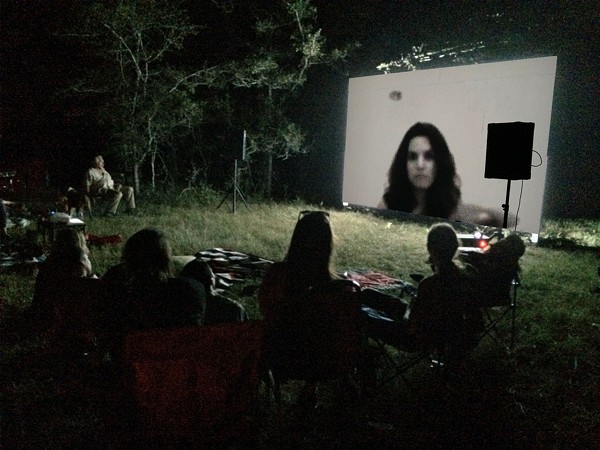