Horse Cents: Dark Horse Is a Cinderella Story Set at the Horse Track 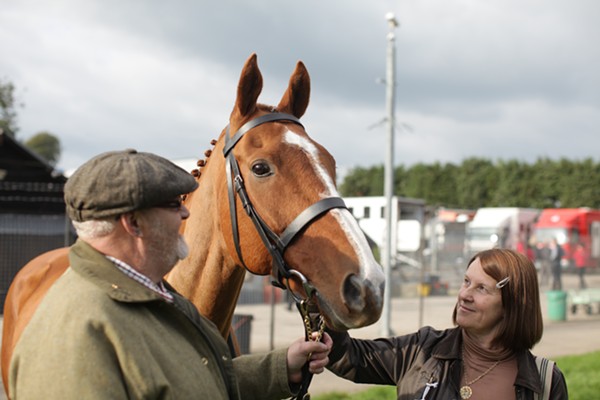 “This is not Churchill Downs, this is not Hollywood Park /When the field’s wide open, I’ll pick the horse that’s got the biggest heart.” –Tim Armstrong

"It's elation when you can do something, particularly when no one gives you a chance." –Howard Davies

Ah, the racetrack. That coliseum of economic and spiritual brutality, where fortunes are made, wagered and lost, livelihoods are forged or floundered and the grand attractions are sometimes shot in the head at close range, pending a veterinarian opinion. These hallowed grounds, where the privileged and the pathetic often meet in the same human form, have always united people under the banner of avarice and desire; some for glory, some for money, some for social clout. For many, the opportunity to rein lady luck in, based on sheer chance or some guarded theory on thoroughbreds and their riders, flies in the face of the American Dream’s premise of work hard, get rewarded … hard. However, for those of the owner echelon, peacocking in hats that could humble the same grounded fowl, to whom money is of no concern and the races offer a place to be seen as opposed to a shot at the grand, glorious come up in finance or social stature, this supposedly sinful recreation is an honored and cherished pastime.

In Wales, the setting for the classist pony doc Dark Horse, horse breeding and racing has been an exclusive hobby of the noble gentry since the 1700s, something closed to the lowly peasant class of which main characters Janet and Brian “Daisy” Vokes proudly belong. Coming from a family of show budgie bird breeders, pigeon racers and Whippet trainers, Jan has been instilled with a proud sense of egalitarianism via competition. That, coupled with the paltry pay and humdrum existence of provincial poverty, was a source of inspiration for Vokes.

“All through my life, I've never actually been me. As a little girl, I was Kelly's daughter. When I started school, I was Trevor's sister. When I got married I was Daisy's wife. And I wanted to make my mark. To prove it to myself more than to anybody else … I worked in a factory for 23 years. You know, nobody really wants to do that for a living, you do it for the money. So, outside of that, anytime that you've got, you have to do something that takes you away from it."

One day, while working as a barmaid in the local working man’s club, Jan overheard a regular, Howard Davies, discussing his previous ownership of a racehorse and the 5,000 pounds he lost on the venture. Jan’s sense of competition was piqued. “I knew nothing whatsoever about racing and such, but I did know that these sort of people, these well-to-do sort of people, liked to keep the sports to themselves. They like to keep us commoners out, I think.”

Inspired by her commitment to make her mark and her aspirations to not only compete but succeed in the “sport of kings,” the Vokes’ purchase a used-up old mare named Rewbell, who never actually won or placed in a race, for a mere 300 pounds. Now, with an actual horse in their possession, Jan, Daisy and Howard organize a “syndicate” of thirty of the bar’s regulars to pool their money in order to pay for the breeding of Rewbell with an American stallion named Bien Bien, who, at the time, held a standing track record at Hollywood Park.

The result of the husbandry was a gelding, a gangly, spindly little thing, all knees and elbows, that they would name by majority vote Dream Alliance, or simply, Dream. For the first months of the horse’s life, Dream “trained” in a shoddily constructed pen of boards and chicken wire, fed on the scraps of the bar patrons’ supper. However, once Davies, a former accountant, worked out the finances, the collective sprang for Dream to train with one of the best horse racing programs in the country under Philip Hobbs for a small, manageable contribution from each.

Dream’s successive career, clearly one for the record books considering there’s a documentary about it, pits him against the greatest racing horses in the world. Proud, pedigreed possessions of monarchs, titans of industry and the spoiled progeny of some great something-or-other. His unbelievable successes unite the small village of retirees and modest laborers in an inspirational Cinderella story of one unlikely horse and the community that loved him. It’s a simple tale of humble beginnings and grand aspirations, of pride over profit and inclusion over income. The winnings never even come into consideration for the group – they ended up with something like 1,000 pounds each upon Dream’s retirement, far less than they ever put into his training. But we do know who Jan Vokes is now, don’t we?