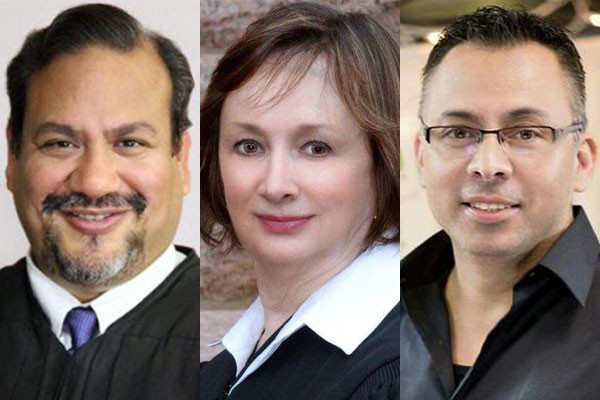 Originally published in Out In SA.

Pride San Antonio this week released the names of the Grand Marshals and Spirit Marshal for the annual Pride Parade which steps off along North Main Avenue on the evening of July 2.

Grand Marshals for the parade are Judge Ron Rangel of the 379th District Court and Judge Genie Wright of County Court 7.

In their announcement, the Pride SA board said, “In these tough times that have befallen our community, we proudly celebrate two judges that, although come from different political parties, have become invaluable allies to our community.” Rangel is a Democrat and Wright is Republican.

Rangel is a longtime supporter of the LGBT community. He has twice sought and received the endorsement of the Stonewall Democrats. He is often seen at community events and has regularly participated in the Pride Parade. Last year, the judge presided over same-sex weddings at the Pride Festival.

In 2015, the Stonewall Democrats of San Antonio honored Rangel with the Political Advocacy Award, which is given annually to “an elected or appointed official who has made significant contributions toward the advancement of equality for LGBT persons at the local, state or national level.”

Wright was elected to the bench in 2010 to preside over County Court 7, a misdemeanor family court that handles domestic violence cases.

Last year, Wright was given the Equality Award from the local chapter of the Human Rights Campaign. The award is given annually to “an individual who works toward equality for all citizens of San Antonio.”

The Spirit Marshal for the parade is John Nunez who is described in the Pride SA announcement as “a community organizer and activist who has proudly defended our community and moved it forward with great spirit and commitment.”

Nunez is a self-employed business man and a hairstylist who also teaches at a local beauty college. He has volunteered with Cornyation, Meals on Wheels and Mujeres Unidas.

“John also has been a very memorable figure in the Pride Parade as part of the San Antonio Street Dance and Drum Company,” Pride SA board secretary James Poindexter told Out In SA.

The Pride San Antonio Festival and Parade, July 2 at Crockett Park. For complete information check out the Pride SA website.