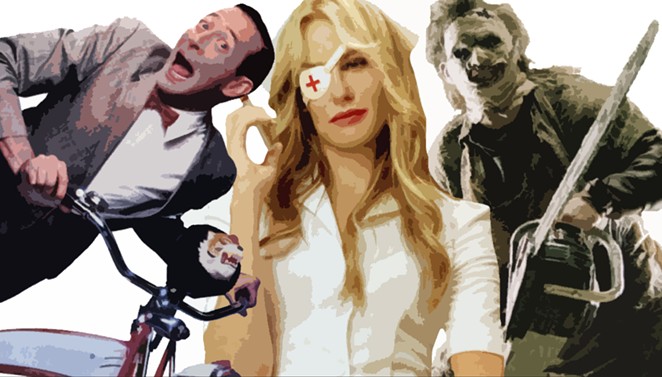 With Texas Comicon 2016 coming to San Antonio at the end of this month, it’s time to start thinking about cosplay ideas and how you plan on sticking out in the crowd (if that’s your thing). Sure, it’s easy enough to toss on a comic-book-inspired shirt or the Ghostbusters costume and proton pack you’ve worn for seven consecutive years, but where’s the fun in that? Instead, why not get a bit more creative and don something that shows how proud you are to be living in the Lone Star State? Here are 10 Texas-inspired movie cosplay ideas in case your Davy Crockett coonskin cap just isn't going to cut it this year.

It might be a bit difficult to get your hands on a captive bolt pistol like the one Anton (Javier Bardem) uses to kill, but for this specific costume it’s all about the hair. If yours is long enough (and you’re open having an embarrassing do for the next eight weeks, go all natural). If not, find a wig you can shape and make sure the part on the side is perfect. Then, find a nice denim jacket, a dark shirt and jeans and some boots. Before you know it, you’ll be ready to start creeping the hell out of fellow Comicon attendees by staying in character and calling everyone friendo.

Corpus Christi teenager Billie Jean Davy (Helen Slater) is inspired when she watches a Joan of Arc movie, so maybe you’ll feel the same sense of female empowerment when you chop your hair into a crew cut and put on a striped, sleeveless jacket, dangling earrings, and some fingerless black gloves. After Comicon, hitchhike with friends to Vermont. Bernie Sanders is waiting.

Even though you'll have to leave the chainsaw at home, there is plenty to work with if you decide to dress up like this iconic killer maniac. Try sticking to the bloody wardrobe of the Gunnar Hansen original version if you want props from cinematic purists (white collared shirt and dark pants, jacket and tie, and maybe a mask made out of bacon).

As the badass leader of a group of undocumented Mexican immigrants, you better be ready to flaunt your Latina pride as much as actress Michelle Rodriguez does in this role. All it takes are some long black boots, black pants, a black leather bra, a black eye patch and some black holsters to keep your weaponry locked and loaded. Drag around a Donald Trump piñata just for the hell of it.

You can probably borrow the Ted Nugent shirt from your racist uncle, but you’re on your own with everything else: the blond wig, the pendant necklace, the coral-colored jeans, the mustache and the dragon tattoo (real or temporary). Take a few high school girls to Comicon to make the look even more authentic.

An eye patch and a nurse’s uniform can go a long way, especially if you want to be part of the Deadly Viper Assassination Squad. Finish the costume with a fake Hanzo sword or a fake syringe or a suitcase full of fake money with a fake rubber snake. Learn how to whistle “Twisted Nerve” by Bernard Herrmann from the 1968 British thriller Twisted Nerve for added effect. Don't visit any hospitals.

Page your inner Pee-wee Herman by wearing a grey suit, red bowtie and a pair of white shoes. Make them platforms if you get a hankering to dance on a bar top. After Comicon, stop by the Alamo and annoy people by asking them if they’ve seen your bike anywhere. Then say, "Francis!" and run away.

Bedazzled bustier? Yes, please. It would help if you could belt out a few lines of “Bidi Bidi Bom Bom,” too. Or you could go for the purple, bell-bottomed jumpsuit she wore during a concert at the Houston Astrodome in 1995, but if you do, you better be ready to do an entire concert for the Comicon geeks in attendance.

A suit with a crest on the pocket and a red beret would do wonders for this nerdy cosplay idea. Add some turtle shell glasses and a honey bee box with the words “Rushmore Beekeepers” written on the side, and you’ve got yourself a winning costume. Extra points for reminding everyone at Comicon that you saved Latin.

Three words: Suspenders and flair. Lots and lots of flair.