Political Art Month Scavenger Hunt: A Survey of the Obvious, Forgotten and Controversial 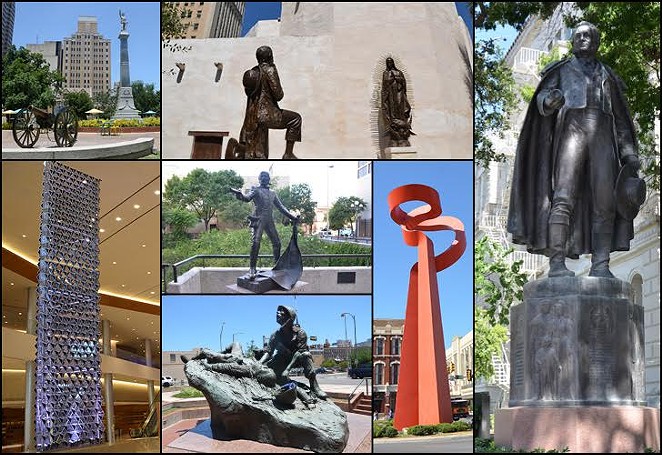 Political Art Month does not have the sanction of the city, state, or any local nonprofit. It is not affiliated with a particular gallery, museum, or performance space. Rather, PAM is a conceptual designation by its founder, Gene Elder, writer, conceptual artist, librettist and archivist of the Happy Foundation, an LGBT archive housed in the Bonham Exchange building. It arose “blooming like Athena” from his brain, partly in reaction to Contemporary Art Month (CAM) being moved in 2010 from July, the month it occupied when it began in 1986 in what was a then-emerging Blue Star, to the more tourist-friendly and less infernally hot month of March.

Initially, Elder didn’t care much for the move, as it broke the annual cohesion, and seemed a CVB gambit favoring tourism over grassroots San Antonio art culture. Nonetheless, CAM's departure left a vacuum just waiting to be filled with: what else? Like the Declaration of Independence, July is inherently political and American. And like the Declaration of Independence, Gene Elder was born on the Fourth of July.

He wants to make clear that PAM belongs to everybody, can be co-opted, usurped, adapted, embraced, or rejected at will. He adds, “you don’t even have to go outside.”

If you get on his email list, you’ll have things to read for the rest of the summer. A prolific social commentator, he tends to send a group email once every three to four days. In these, you will find film reviews, links to articles about good health or UFOs (he’s a longtime listener of Coast to Coast AM) video clips, art criticism, and almost always an axiom that makes me laugh out loud.

Ask your doctor if getting off your ass is right for you.

When I pledged the Pledge of Allegiance to God and country there was nothing about following orders. So I don’t.

He’s a rights-fighting LGBTQ OG as well, marching on Washington in 1987, one of the activists who volunteered for an arrest on the steps of the Supreme Court.

He’s the grassroots journalist behind “A View of Reality from a Chartreuse Couch,” a column currently featured in Out In SA, and his letters to the editor, often about the River Road neighborhood in which he lives, make the San Antonio Express-News fairly regularly.

An irreverent devotion to San Antonio history is a theme throughout his work, including an eight-year performance project covered by The Wall Street Journal in an August 20, 1999 article entitled “Performance Artist Gene Elder Walks into Tourists’ Home Movies,” which is exactly what he did — in front of the Alamo.

Even before the internet, which empowers anybody to be a self-appointed anything (curator, media producer, “journalist,” etc.), Gene Elder took to as many media as his imagination could handle. He once wrote a “revenge ballet” called Fairies Fiasco … but that’s a story for another time. For the purposes of this PAM scavenger hunt, a kind of ad hoc go-guide, he acts as curator, docent, and verbal archivist.

The PAM Survey: A Colloquial Study

In years past, Elder has, in fact, fomented some PAM activity, but this is the first two-person downtown survey of political art that anyone can get their eyes on. Here’s how we did it: Gene Elder and I drove around downtown, with Elder both driving and opining, with me taking notes. As we approached a particularly juicy piece of work, he’d stop the car and I would hop out, examine it, make notes, hop back in the car, and get Elder’s take. See how easy PAM is?

Several of these pieces, you doubtless will have seen. La Antorcha de la Amistad (The Torch of Friendship), at the very least. Some of these, you’re likely to have walked by a dozen times if you’re a denizen of downtown, with hardly a second glance.

A note: These remarks are not meant as a historical or critical study; rather, they’re verbal drive-bys.

Another note: Out of the seven pieces we chose, four depict men with guns.

This plaza houses not one, but two bronze soldier groupings, one memorializing Vietnam, the other Korea, but in aggregate meant to honor all our fallen, anywhere. The figures are tensed, ready for battle, tough, memorialized. Oddly, they from some angles appear to be at war with each other. One cannot find issue with its mission, in this most military of American cities. Often, visitors to the site leave remembrances — cards, flowers, a patriotic ribbon tied around one of the guns’ barrels.

The plaza itself, however, seems both over- and under-designed, a series of separate gestures — the islands of men huddled together, one in an improvised-seeming pile of concrete. The figure rendering, while competent, is a little sketchy. They are like claymation in bronze.

Elder is not a fan, and points out that it was a railroaded, occult sort of project that covered up a perfectly good WWI memorial.

I opine that this outsized obelisk marks San Antonio as part of a larger, if distant South. Elder is skeptical. But we were officially segregated, I protest. The Robert E. Lee Hotel is visible from here. There’s a high school named after him. Think of the accent, the biscuits, the risible and continuing issues of social justice. Whatever else San Antonio is, it’s Southern.
The legend on the obelisk reads, “Lest we forget our Confederate dead.”
Elder sniffs. “There can’t have been that many.”

An Unsung Hero of the Alamo
Directly across from 123 Losoya St.

You know what? I always thought this statue was of Juan Seguin. Elder is appalled at this. “It’s on Losoya Street!”

The image of it that springs to mind is of tourists standing with their heads next to the gun, eerily recalling Eddie Adams’ famous photograph General Nguyen Ngoc Loan executing a Viet Cong prisoner in Saigon. And it’s a good thing Mr. Losoya is standing on something: he’s tiny. Smaller than human-scale. A bronze elf. Why so small? It seems significant. He’s acknowledged by the plaque as unheralded, un-thanked. It was a gift from Coors. What did they mean by it, we wonder?

He sports a Rambo-style headband and a look of defiance. He is, by far, the handsomest of the bronze heroes.


Another ignored (by me) bronze guy I’d never bothered much about. As it turns out, it’s Moses Austin, the Connecticut-born colonial impresario who paved the way for, well, white people. The statue was erected in 1936, on the occasion of the Republic of Texas Centennial, with federal funds. Why him? He extends a hand with a rolled-up document in the direction of the Spanish Governor's Palace. His look is triumphant, as though 300 white families were to take their rightful place based on his God-granted fiat.

Interestingly, Moses Austin spent a scant year in Texas, before escaping to Missouri. According to the pediment, “Exposure and exhaustion during his Texas journey caused his death.”

What does that tell you? Elder and I feel it may be karmic.

You know it. The sky-arching twirly red steel ribbon. “I think the feng shui is perfect where it’s placed — it takes the energy flow from the Alamo and stirs it around on the roundabout,” Elder says, dispersing the violence of the battle, and standing as a reminder that the relationship between San Antonio and its once mother country remains indelible. Worthy of note, it’s often the focus of static video that appears in interstitial ad break-bits, including the Spurs and the NCAA. So it’s associated with a very 21st-century form of victory.

“We are, after all, in the city of Saint Anthony,” Elder says. It’s placed with curious serendipity, in a small walled-off area at the rear of the San Fernando Cathedral. If you stand with her and Juan Diego at your back as Moses Austin does, Moses’ back seems particularly grandiose and clueless as he brandishes his scroll at the Spanish Governor’s Palace.

It’s an unusual 3D depiction; her pointy rays are spiky and delineated, but she wears the customary Buddha-like compassion, and Juan Diego — indigenous, poor, but invested with grace and celestial power — kneels in wonder. It’s another salute to and a reminder of the devotional history of our city, the Mexican Catholicism that existed here long before Moses Austin thought to bring white people. Moses’ son, Stephen F. Austin, has been described as “the father of Texas.” Here is the mother of everything.

Fittingly, she marks the departure from military to a more humanistic history. To wit:

We close with another giant architectural abstract, this one representing the controversy and doubt surrounding public art in SA.

While Elder idles at the curb, I’m confronted by the monolith in the Henry B. Gonzalez Convention Center lobby. The surface is made up of hundreds of LED panels. I am initially unimpressed, finding it a looming, almost menacing presence, forboding some ill for civic life of our city. Also, it appears to be unplugged. But the fault lies in my perspective; nobody is walking past, so it hasn’t got much to respond to.

Steeped in controversy due to its $1 million price tag and installed in spitting distance from San Antonio artist Bill FitzGibbons’ similarly color-shifting, LED-powered Light Channels, London-based (gasp!) Jason Bruges Studio’s towering “cheese grater” amusingly earned a “like” from FitzGibbons when we posted a photo of it on Instagram. We decided to consider this the very first public response to our curation.

In the spirit of PAM democracy, let’s let this vote stand.