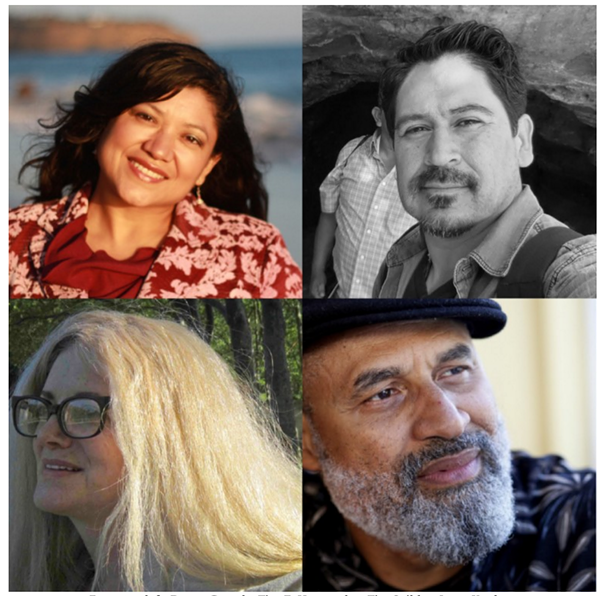 Gemini Ink, grown into a dynamic and important literary organization from a small volunteer reading series for local writers, has been a key player in the San Antonio literary milieu since its founding in 1997. Steadfast in its mission to “help people create and share the human story,” Gemini Ink, with its workshops, classes, readings, outreach and mentorship programs, is a catalyst of inspiration and connection for local readers and writers alike. In keeping with its trend of ever-broadening the scope of its impact, Gemini Ink presents its inaugural Writers Conference this weekend. In addition to a wide array of panels and workshops ($75-$150), the conference includes several free offerings, including an opening reception at host venue El Tropicano Riverwalk Hotel (5:30-7:30pm Thu, 110 Lexington Ave.), an open-air reading with Janet Kaplan, Tim Z. Hernandez, Bryce Milligan, Wendy Barker and Andrea Vocab Sanderson at Viva Tacoland (7-11pm Fri, 103 W. Grayson St.), a book fair with author signings at El Tropicano (10am-6pm Sat) and a cocktail hour and after party with a cash bar, light fare and readings from Reyna Grande, Tim Seibles, Barbara Ras and Laurie Ann Guerrero in the Coates Chapel at the Southwest School of Art (6-10pm Sat, 300 Augusta St.). For details, call (210) 734-9673 or visit geminiink.org. — James Courtney

This mini-fest gathers three of San Antonio’s premier female-fronted bands to raise money for the city’s Family Violence Prevention Services. Dirty Genez, led by violinist and singer Jordan Moonz, opens with a set of driving and ethereal rock ’n’ roll. At the front of denim vest punk quartet Lloranas, Amanda Vega whirls around in command of the stage and her band’s hurtling, noisy efforts. Daniela Riojas leads the intensely capable Femina-X as they tackle a merger of latin-alt and electro-pop; if we’re lucky, they’ll pull out their recent addition of “Como La Flor.” For a cover, the fundraiser will accept a donation of baby items, clothing or household goods. $5, 9:15pm Fri, The Mix, 2403 N. St. Mary’s St., (210) 735-1313, themix-sa.com. — Matt Stieb

Among the stand-ups other stand-ups frequently mention as the greatest living, Dave Attell is an anomaly: not as introspective as Maria Bamford, as sociological as Chris Rock or as philosophical as Louis C.K., Attell is probably best described as a joke guy, and many of those jokes are of the ever-popular dick persuasion. It’s no coincidence that Comedy Central’s Insomniac, Attell’s best-known work, isn’t an independent-cinema-inspired dissection of the heart and mind but a show where he goofed around with people in bars. Making drunks laugh seems like a simple skill, but to see a master work his craft is always a thing of beauty. $27.50, 8pm & 10:15pm Fri, 7:15pm & 9:30pm Sat, Laugh Out Loud Comedy Club, 618 NW Loop 410, (210) 541-8805, lolsanantonio.com. — Jeremy Martin

As part of the their Films on the Green outdoor series, SAMA is screens Mexican director/writer Guillermo del Toro’s critically-acclaimed 2006 Spanish-language fairy tale set on the backdrop of the post-Spanish Civil War. The dark fantasy follows a young girl named Ofelia as she steps into a mythical garden maze where she meets a host of magical creatures, including a mysterious faun who guides her. $5-$10, 8:30pm Fri (rescheduled from June 3 due to rain), San Antonio Museum of Art, 200 W. Jones Ave., (210) 978-8100, samuseum.org. — Kiko Martínez

That San Antonio photographer Charlie Kitchen’s photo-constructions are visually arresting, opening fresh and odd vistas onto familiar landscape imagery, is perhaps beside the point of his explorations — but it’s certainly a damn fine opening argument as to why you’ll want to attend his new solo exhibit. For Kitchen, who graduated with a degree in photography from Texas State University in 2014 and currently works at Artpace, the importance of his work is in what he calls “pseudo-scientific analysis of the fundamental qualities of photography.” Part analog and part digital, Kitchen’s process involves the use of large-format cameras, specialized film masks and 3D-printed templates that are inserted in the camera during exposure for a kind of in-camera collage. The resulting works, aside from being fascinating and beautiful, are multiple exposures that combine two forms of representation. These dazzling pieces, therefore, can be enjoyed and understood on multiple levels, proffering technical wizardry right alongside aesthetic pleasure. Free, 2-4pm Sat, Southwest School of Art, Santikos Lobby Gallery, 1201 Navarro St., (210) 224-1848, swschool.org. — JC

In the process of developing an aesthetic that’s easily recognizable as her very own, artist Sara Frantz has accomplished other difficult feats — giving landscape painting a fascinating remix, evoking collage without cutting or pasting, and making architectural relics appear lonely — even alienated — despite prismatic interventions. A Chicago native who taught at the University of Texas at Austin and UTSA from 2007 to 2014 and currently teaches at California Polytechnic State University, Frantz fuses three classic concepts (travel, landscape and nature — both real and imagined) in works that place multicolored structures (rendered in gouache) in bleak-looking black-and-white environments (rendered in graphite). Exhibition-ready following a fire in May and closure for repairs, Sala Diaz plays host to Frantz’s tellingly titled “Vacancy.” Nodding to the absence of people — and sometimes life in general — in her work, the solo show sees Frantz acting as “the architect of a fake utopian commune of trailer homes” custom-crafted for such characters as “a willing victim of wanderlust, a doctor of philosophy, an aeronautical engineer and an entrepreneur/mother.” Free, 6-9pm Sat, Sala Diaz, 517 Stieren St., (972) 900-0047, saladiazart.org. — Bryan Rindfuss 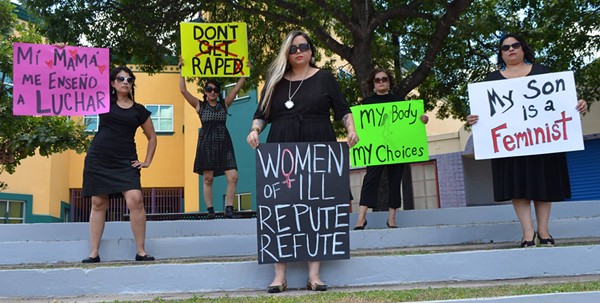 A poetic exploration of “self-discovery and wisdom, power and weakness, despair and transcendence,” the all-female production Women of Ill Repute: REFUTE! first took the Guadalupe Theater’s stage 15 years ago, when its creators donated a portion of proceeds to the Rape Crisis Center under the name “Angels.” Having welcomed a dozen distinct voices into the fold for incarnations in San Antonio and Austin, the collaborative endeavor evolves through the true stories of its cast but stays focused on progressive change while addressing “perceptions of gender, culture, identity, violence, abuse, anger, happiness and joy.” Promising a living “tapestry of experience,” the 2016 revival unites poets, actors, writers and activists Victoria Garcia Zapata-Klein, Amalia Ortiz, Maria Ibarra, Andi Garcia-Linn and Lisa Cortez Walden. $12-$15 (donations accepted on behalf of the Rape Crisis Center), 8pm Sat, Guadalupe Theater, 1301 Guadalupe St., (210) 271-3151, guadalupeculturalarts.org. — BR

Local post-rock five-piece Bright Like the Sun (BLTS) has found a niche for itself within the flood of Texas post-rock outfits this side of Explosions in the Sky. The band’s music, both heavier (in raw sonic power) and lighter (in mood) than many of its contemporaries, is masterfully produced and composed with increasing inventiveness and attention to fine detail. BLTS’ sophomore LP, produced by This Will Destroy You’s Alex Bhore and out back in 2015 on Sun Sea Sky Productions, is the work of a band that has found its identity and, in it, its way forward. But apparently, we aren’t the only ones feeling the heat of BLTS’ brilliance. Saturday marks the beginning of a potentially game-changing tour for the group, as they play their final show before heading off on a 10-date tour of Japan. The boys will be backed in this departing salvo by jazz-rock outfit Cliffside of the Pinkeyed Sky. $8-$12, 8pm Sat, Ventura, 1011 Avenue B, (210) 802-6940, facebook.com/venturasatx. — JC