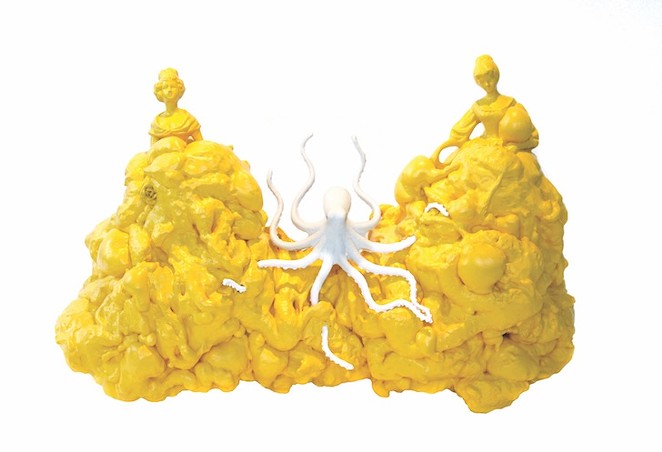 With influences ranging from Frida Kahlo to Marcel Duchamp, Mexican artist Cisco Jimenez, among the first Artpace resident artists in 1995, says the key to surrealism is to create something “apparently disparate and irrational” that “at the end has more sense than the objective world.”

“Surreal” is now commonly used to describe intense, disorienting experiences from natural disasters to mass shootings. But for artists, the word has more to do with unusual juxtapositions of mundane objects in dreamlike ways to convey deeper meaning, often dredged from the subconscious using Freudian free association techniques such as automatism, tapping into the mythic and archetypal realms of consciousness.

“I like to take ideas and then start a process of dismantling and dislocating them, deconstructing them so what remains replaces and gives new meanings to ordinary things and thoughts,” Jimenez said in an email from his Cuernavaca studio. Responding to whether he is a “dreamer or a realist” he replied, “I’m a realist camouflaged in the way of a dreamer.”

Jimenez created elaborate collages using candy wrappers, beer labels, advertising and his own droopy drawings, including a boozy tribute to English writer Malcolm Lowry’s Under the Volcano, for “Dreamers and Realists,” on view at Ruiz-Healy Art through September 3. Nationally-known San Antonio artist Jesse Amado put the show together, but rather than “curate,” he prefers to say he “tailored” this set of artists who address reality as dreamers.

“These artists are both dreamers and realists. The globalization of art means artists are being asked to respond to a broader view of the world and to not be so introspective and dreamy,” Amado said. “I’ve always been fascinated by how surrealism can give extraordinary meaning to ordinary things. The works in this show are imbued with meaning that is relative to our existence in contemporary times, but maybe not in the way people usually think.”

The macabre Flayed Superficial Soft Tissue shows the meticulously realistic painting skills of the self-taught Alejandro Augustine Padilla, but two years ago he began making fantastic three-dimensional works using found objects, paint and spray foam insulation. The yellow-painted foam provides a cloud-like base for the otherworldly The New Monsters, the New Myths, with a pair of porcelain female figures topping peaks over an albino octopus. The robed figure casting a spell with a splash of gold foam in Bye Bye Blackbird has a Darth Vaderish vibe.

“I’ve spent a lot of time studying the surreal objects at the Menil Collection in Houston and decided to make my own,” Padilla said. “I prefer using ordinary materials like the spray foam. My studio is full of found objects that I mix and match to make unexpected connections. While I’m influenced by the stylistic techniques of the surrealists and their fascination with the subconscious, I also draw from my own experiences in dealing with mental illness.”

A teacher at the Southwest School of Art, San Antonio native Kaela Puente earned her BFA in ceramics and painting at the University of the Incarnate Word in 2013 and is poised to finish her MFA at UTSA this year. She uses images of a bear, mountain lion, gorilla and wolves in her colorful ceramic pieces resembling Egyptian canopic jars, which Amado compares to the work of Los Angeles ceramist Ken Price. Bird Talk brings to mind an Edward Gorey raven.

“[Surrealism] gives me freedom to recreate my own reality,” Puente said. “I would say I am a dreamer. I perceive the world in the way I wish it to be. Basically, I imagine the change I want to see and overlay it on the actual reality to make a new one. I can’t help but dream when the reality we live in needs more hopeful people to maybe one day change it.”

Amado confronts a horrific reality in his installation, A Mass Disappearance of 43 Students, using cut-out pieces of brown felt to symbolize the victims of the 2014 killings in the Mexican state of Guerrero.

“Brown felt for brown people,” Amado said. “It’s amazing that such a thing could happen, but it’s important to remember these students who planned to be teachers and to keep their story alive.”

Photo-based collages are among the other works in “Dreamers and Realists,” including Andres Ferrandis’ coolly dotted reflections on the history of analog cameras along with Nicole Franchy’s melancholic juxtapositions of re-imagined landscapes. While rooted in the reality of our times, these artists use surrealistic techniques to provide a realer, more nuanced and layered vision of the human experience.

You can check out more onGremlins, Goblins and Other Curiosities in Ruiz-Healy Art’s “Dreamers and Realists” here.