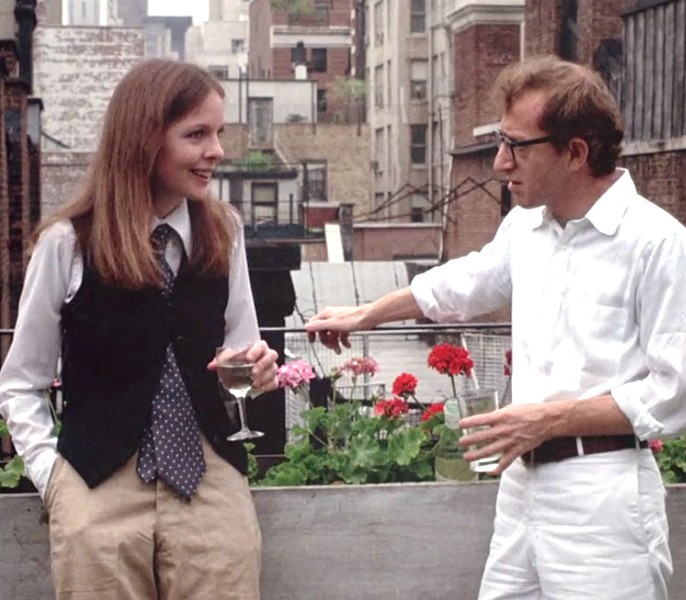 “Alvy, you're incapable of enjoying life, you know that?” asks a waifish Diane Keaton behind the tortoiseshell frames of her sunglasses. “I mean, you're like New York City. You're just this person. You're like this island unto yourself.”

Taken aback, Alvy shuffles through verbiage, stifled by his “chronic Los Angeles nausea” upon revisiting his ex-lover at a busy outdoor café on Sunset Boulevard. Now, so many miles away from his rollercoaster-rattled childhood on the Coney Island Boardwalk, Alvy is forced to face the isolating terror that underlies his neurotic personality.

“So, wanna get married or what?” he answers, desperately.

Portrayed by a tight-lipped Woody Allen at his shrewdest, Alvy Singer is the romantic lead of the Bronx-born director’s Annie Hall, the categorical champion of the 50th Academy Awards in 1978 and the personal manifesto of sad-eyed bohemians everywhere.

Pioneering contemporary indie cinema (think Kevin Smith’s Chasing Amy and Marc Webb’s 500 Days of Summer), the iconic film surpasses the limits of genre by subverting its label as a romantic comedy in the process of making almost encyclopedic commentary on heavy topics like sex, race and modernity. In our clumsy endeavor to understand and be understood, we trudge through the maddening banalities of life, murdering lobsters and laying to waste a trove of cocaine alongside a dramatized version of Woody Allen himself.

But, before we romanticize the bespectacled dork behind the untouchable Annie Hall, we could suffer to pull back the curtain and curb our infatuation with a healthy dose of reality; namely, that Woody Allen is a total creep.

Granddaughter of the American novelist, Mariel Hemingway claimed in her memoir that 44-year-old Allen attempted to seduce her, then 16, after the filming of Manhattan in 1979. He traveled to her family’s home in Idaho and invited her to Paris once she turned 18, an offer she declined upon realizing “no one was going to get their own room,” according to a report by Vanity Fair. Hemingway’s accusation, however, is not the only questionable episode in Allen’s eccentric personal life.

Shortly before the debut of Husbands and Wives in 1992, the director’s twelve-year relationship with Mia Farrow erupted in scandal when the actress discovered nude photos of her adopted daughter Soon-Yi in Allen’s possession. After news of the strange affair surfaced, Allen continued to date his de facto stepdaughter until the couple married in 1997.

This latest relationship remained largely mythological until Allen broached the subject of his controversial marriage to Soon-Yi in a recent interview with The Hollywood Reporter. Using language that borders on paternal, Allen admitted, “The contributions I've made to her life have given me more pleasure than all my films."

Yet, the most salient point against Allen belongs to his legally adopted daughter, Dylan Farrow, who accused her father of sexual abuse at the age of seven. While the case was dropped in 1993 after a judge determined the charges to be inconclusive, Farrow repeated the allegation in 2014 in an open letter published by the New York Times. Allen was never prosecuted, so naturally he deserves the presumption of innocence; but, it lends a troubling layer of nuance to his already sensational biography.

An amazingly prolific writer, director and actor—he counts 24 Academy Award nominations for 16 films—Woody Allen is virtually peerless, with the emotional anarchy of Annie Hall representing his first revolutionary project in cinema. But, like many other visionaries in the entertainment industry, his past is, at best, sketchy. Both an immensely talented artist and a deeply flawed human being, Allen’s peculiar persona begs a vexing question: Is a masterpiece tainted by the sins of its creator?

We tend to overlook the sleaziness of virtuosity. Pablo Picasso was a serial adulterer with a penchant for domestic violence, but who can deny the weight and lasting significance of Guernica? John Lennon abused his first wife and son during the height of Beatlemania, but who can refute the raw power of “Imagine”? The list goes on, but where do we draw the proverbial line in the sand? Is it wrong to appreciate art in a vacuum?

Perhaps we should understand the content of Woody Allen’s filmography in the vein of Alvy Singer’s character—complex in his self-centered pontification, but utterly relatable in his fear of estrangement. Towering like Manhattan, a lonely island known only to himself.