Tim Hedgepeth is an independent theater artist and a member of the drama faculty at Northwest Vista College. He is one busy person. Along with being the co-founder and artistic director of the Allegro Stage Company, he’s a guest director for an array of local theaters including The Playhouse, the Woodlawn Theatre and The Classic Theatre of San Antonio.

Hedgepeth received his MFA in directing from the University of Wisconsin-Madison and BA in drama from Trinity University. He is the recipient of 10 Globe Awards for excellence in directing and acting from the Alamo Theatre Arts Council (ATAC). The History Boys, Cabaret, Hay Fever, Red, Les Misérables, Private Lives, End of the Rainbow, La Cage Aux Folles, Noises Off and The Tempest stand out among Hedgepeth’s many memorable local productions.

Hedgepeth recently directed A Chorus Line for The Playhouse and is currently in rehearsals for Edward Albee’s Marriage Play, featuring Catherine Babbitt and Andrew Thornton, to be staged at The Classic Theatre early this autumn. 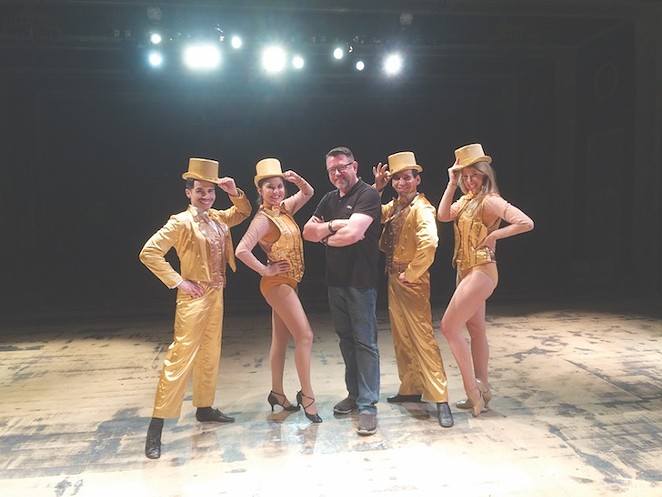 What was your first theater experience?  My parents took me to see the national touring company of Man of La Mancha during HemisFair in 1968, at the brand new Theatre for the Performing Arts (now the Lila Cockrell). From the moment the lights went down and the overture began, I was transported. Seriously. I remember it as though it were yesterday. A few weeks later, my mom took me to see Neil Simon’s Come Blow Your Horn at the Lackland Air Force Base Little Theatre. I’ve been hooked ever since.

What is it about live theater that is so transformative? A theatrical performance happens only once and then it’s gone forever, consigned only to the memories of the artists who make it happen and the audience that is present at that time. The same actors may perform the very same script the next evening, but it will be different in dozens of little ways, and they will be playing to a different audience so the experience is not the same. The intimacy between actor and spectator is entirely new once again. We can all watch a movie at a different cinema or on our device of choice, and we are always seeing the same movie. It never changes. But a theater performance exists only in the moment we are there, and then it’s history.

Were you an actor before you directed? Yes, and I was terrible. In college I was reliably typecast as an old man or a dandy. If Edward Everett Horton and Ethel Merman had conceived a love child, that would have been me. I return to the other side of the footlights from time to time, but I’d much rather be in the director’s seat.

What was your first experience as a director? In sixth grade, I adapted Shakespeare’s Julius Caesar into a five-minute epic for a PTA meeting. But I always consider my thesis production in graduate school as my first real gig. It was Christopher Durang’s The Marriage of Bette and Boo. To this day, it remains one of my favorite productions. And it’s a really great play, by the way.

Did you have a mentor? I had two: Mary Ann Colias, my directing teacher at Trinity, took me under her wing and taught me how to visualize a play as a living, breathing and beautiful thing, and how to free myself from structure and expectation so that my own ideas about its design, movement and interpretation could flourish. I was her assistant director on a production during my senior year. That experience will forever be ... the greatest “class” I ever had. In graduate school, I studied with the brilliant Ed Amor. Do you remember John Houseman in The Paper Chase? He was just like that: demanding, unapologetic, questioning, quick to criticize but — on a rare occasion — so generous with his praise you’d want to cry. Then there is Paul Baker, founder of the Dallas Theatre Center as well as Trinity’s drama department. I did not know him well enough to call him a mentor, but most of his faculty taught the “Baker method,” also known as Integration of Abilities, which continues to inform my directing and coaching to this very day. When I was in junior high, my dad took me to see Mr. Baker’s production of Hamlet ESP. I was probably 13 or 14 at the time. I remember that was the first play I didn’t like. For starters, as I recall, there were three actors playing Hamlet and they tossed around a football representing the ghost of his father. Something like that. It was all really sacrilegious to me, yet I couldn’t stop thinking about it. It was my first encounter with truly imaginative, challenging theater-making. But I wasn’t yet ready to step out my comfort zone defined by Fiddler on the Roof and Harvey.

If you could go back in time and see three plays, what would you pick? First performance of Shakespeare’s Henry V at the Globe Theatre, circa 1599; opening night of Private Lives with Noel Coward and Gertrude Lawrence, London, 1930; opening night of My Fair Lady with Rex Harrison and Julie Andrews, New York, 1956. And like anyone else, I wish I could have seen Molière starring in one of his own comedies, Laurette Taylor in the first Glass Menagerie, Brando in Streetcar, the original cast of A Raisin in the Sun, opening night of Show Boat, the list goes on and on.

Do you have a signature style? Is there something in your productions that identifies you as the director? When I was just starting out, I played  a recording of Eydie Gorme’s “Blame It on the Bossa Nova” in a couple of my productions — including a play by Shakespeare — but that didn’t last long. I do like shaking things up whenever I can, as long as whatever I do manages to service the script. I was the artistic and founding director of a terrific little fly-by-the-seat-our-pants theater company in Jackson, Mississippi. We performed wherever we could find a venue at little cost, or free of charge, and often the space and our nickel-and-dime budgets dictated how I would stage the script. It was very liberating. My most creative work in recent years has probably been at Northwest Vista College where I have been able to turn a few plays on their head — respectfully, of course. We have a great team in place and our collaborations are energizing and fun. We’ve got just enough structure to keep us in line but still lots of opportunities to experiment and then sink or swim. On the other hand, I have done two shows recently — A Chorus Line at The Playhouse and Noises Off at Vista — which can only be done one way. And that’s fine, too. I am really proud of both of those shows, by the way.

When you and your husband René go on vacation, do you attend plays and go to art museums? Yep, that’s exactly what we do. We are lucky; our work is also what we love. So our vacations consist of theater, dance, art, old friends and good food. You’ll never find us on a beach or anywhere near the great outdoors.

Tell me something about yourself that would surprise your friends. I love Spaghetti Westerns.

What’s the best advice you give your students? I want them to realize that each of them are artists. I know that sounds hokey, but it’s true. If I can help them find and learn how to nourish and celebrate the creative energy lurking within them, that’s much more important to me than if they can perform a good monologue or write a decent term paper.

Do you feel theater students have a realistic grasp of their chances of making a living through acting? Of course they don’t. And neither did I when I was their age. I tell them till I’m blue in the face, every semester, about how difficult it is, but if they really want something, they should go for it and commit to everything it takes — lessons and more lessons, conservatory, grad school, watching every Spencer Tracy movie ever made, etc. — just like my teachers told me. Those who are very serious about this chosen path will, eventually, do what they need to do. But even if it’s a pipe dream, that’s okay by me. I think we all need to dream more often these days, anyway.