As a professional actor for the last 30 years, Gil Birmingham (The Twilight Saga, TV’s House of Cards) knows the difference between projects he considers “commercial endeavors that help you sustain your life” and those he considers art. It’s the latter he finds more fulfilling as a TV and movie star.

“There are things I really love to do as an artist,” Birmingham, 63, told the Current during an interview at El Tropicano Hotel last month. “I love doing things where I can put my heart and soul into it.”

Birmingham considers his latest film, Hell or High Water, the kind of character-driven project that demonstrates why he has enjoyed his work as an actor for the last three decades. In the film, Birmingham plays Alberto Parker, a half-Comanche, half-Mexican Texas Ranger who teams up with his partner of 15 years (Oscar winner Jeff Bridges) to catch a pair of bank robbing brothers (Chris Pine and Ben Foster) in West Texas. Birmingham, who was born in San Antonio where he spent the first two years of his life, likens the brothers to ordinary U.S. citizens who lost everything during the 2008 recession.

“I think [the film] has some very interesting twists, especially as it pertains to the contemporary application of the recession and how people have been struggling,” he said. “The antagonist is the banks, but I think it’s metaphoric for corporations, too.”

Hell or High Water marks the first time Birmingham has worked so closely with an actor of Bridges' caliber. Because the film relies so much on the dynamic between the two veteran actors, they were given time during pre-production to create a bond that would translate to their characters’ friendship. Much of that rapport came from their real-life fondness for music. 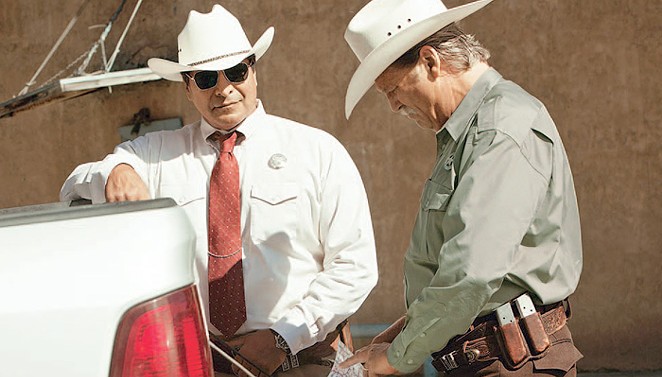 “We spent about a week together…and that provided a great opportunity for Jeff and I to just get to know each other musically speaking,” Birmingham said. “Every day Jeff would ask me, ‘Did you bring your guitar?’ I would say, ‘Jeff, when are we going to get a chance to play? We’re doing 14-hour days!” He'd go, 'You never know.’”

Before production on the film began, Birmingham and Bridges had logged quite a few hours playing the guitar together. More importantly, they established a camaraderie that is evident in the film, especially since they spend a majority of their time sharing the screen.

“I’ve worked with a number of A-list actors, but not to the extent that this movie provided,” Birmingham said. “It was like Jeff and I were doing a movie by ourselves. It was like filming a movie with two buddies.”

The role was also an opportunity for Birmingham to portray a Native American character in a positive light. It’s something he says he is conscious of every time he accepts a role at this point of his career.

“I feel a certain responsibility to do portrayals [of Native Americans] that are not going to be offensive,” he said. “If it’s a senseless injection of some stereotype, then it’s only perpetuating the very thing we’re trying to change.”