Likened by theater critic Ben Brantley to “a Beverly Hillbillies or Green Acres episode with a social conscience,” The Foreigner is one of two enduring farces left behind by Larry Shue, a playwright and actor who died in a 1985 plane crash at age 39. Only slightly lesser known than his slapstick, dinner-party comedy The Nerd, the Obie Award-winning play follows tragically shy British proofreader Charlie Baker to a rural fishing lodge in Georgia where he masquerades as a foreigner from an exotic locale. Although introduced by his pal “Froggy” LeSeuer in hopes of sparing him from having to talk to strangers, Charlie’s purported otherness only gets him closer to the assembled oddballs and rednecks, their dark secrets and a plot to convert the lodge into a stomping ground for the Ku Klux Klan. Ken Frazier and Dylan Brainard co-direct Jared Stephens and Michael Burger in The Vex’s production. $16-$22, 7:30pm Thu, 8pm Sat, 2:30pm Sun, Barshop Jewish Community Center, Sheldon Vexler Theatre, 12500 NW Military Hwy. (210) 302-6835, vexler.org. — Bryan Rindfuss

Even the most seasoned foodies can lose sight of what’s important during Culinaria’s San Antonio Restaurant Week (Aug. 13-27). One big, wine-filled dinner at the beginning of the week could easily derail what should be two weeks’ worth of lunching and dining at new/favorite eateries for a good cause. Background for the newbies: Restaurant Week serves as one of the major fundraisers for Culinaria, which uses the funds for The Farm, a soon-to-be-completed educational farm that’s tricked out with several growing practices. Planting will start in two weeks with help from the MIT City Farm and the University of Houston’s Conrad N. Hilton College of Hotel and Restaurant Management which will share new planting and growing techniques. The best part of Restaurant Week is that it allows for exploration without an expensive investment. With Tier 1 restaurants offering a $15 lunch and $35 dinner and Tier 2 joints keeping things downright cheap with a $10 lunch and $25 dinner, patrons can feasibly enjoy several lunches or a few dinners without breaking the bank. Visit culinariasa.org for a complete list of participating restaurants. $10-$35 per person, through August 27, locations vary, culinariasa.org. — Jessica Elizarraras

Excerpted from Tips For Making the Most of San Antonio Restaurant Week.

Presenting a fresher and more feminine aesthetic than the other sweaty bros over at the totally bodacious Burger Records, The Aquadolls, fronted by founder Melissa Brooks, is a totally Orange County, grunge-glam/surf-pop outfit — and most likely the exact thing that’s been missing in your life. Though the group hasn’t released any new music since 2013’s raunchy, fun and fuzzy Stoked on You, Brooks and company come to San Antonio as part of their first national tour and, presumably, in preparation to take over the whole world. If you like your garage rock with a Cali sheen and a poppy wink, all stressed out on tie-dye, then you’ll wanna catch Melissa Brooks and the Aquadolls. Local grunge punk outfit Whatever? and young Chicago electro-indie artist Storm Calysta round out the bill. $10, doors at 7pm Fri, Paper Tiger, 2410 N. St. Mary’s St., papertigersa.com. — James Courtney 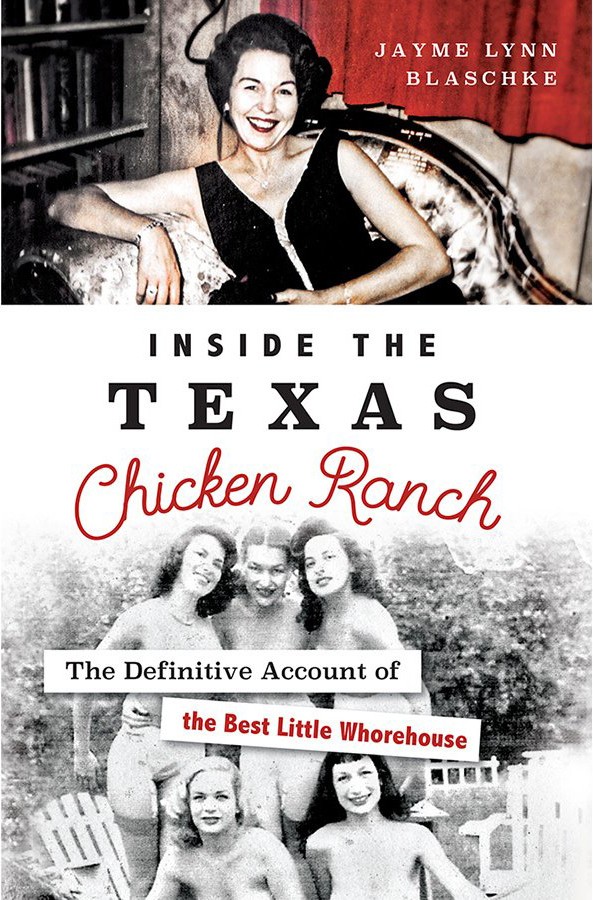 Hailed as “the best account of the Best Little Whorehouse in Texas ever written,” Jayme Lynn Blaschke’s Inside the Texas Chicken Ranch delivers much more than its title suggests — diving into the history of prostitution and brothels in the Lone Star State in the process of building a compelling portrait of “that home out on the range” immortalized in ZZ Top’s 1973 classic “La Grange.” Informed by oral histories, extensive research and interviews the author conducted with legendary madam Edna Milton Chadwell, the 336-page book debunks myths and rumors that swirl around the iconic brothel and its origin story, yet presents them as vivid little folktales. Although it devotes an entire chapter to Marvin Zindler, the KTRK consumer affairs reporter who eventually brought the Chicken Ranch to a halt in 1973, no one can upstage Chadwell, whose disarming wit shines through everything from her official Chicken Ranch Rules and Regulations for Boarders to the bawdy jokes and raunchy rhymes she employed to break the ice and cut through “testosterone-fueled tension.” On Friday, The Twig hosts a reading with Blaschke, who directs the Office of Media Relations at Texas State University. Free, 6-8pm Fri, The Twig, 306 Pearl Pkwy., (210) 826-6411, thetwig.com. — BR

In the foreward for comic Sarah Colonna’s first book Life As I Blow It, Chelsea Handler calls Colonna (who worked for several years on Chelsea Lately) “probably the funniest person I know.” In a blurb for that same book, Juno and Young Adult scribe Diablo Cody calls Colonna “one of the best comic storytellers we’ve got.” On the other hand, Colonna, not two pages into said memoir, calls herself “a fucking mess,” a perspective that seems not to have changed much, judging by the literal cry-for-help titles of last year’s follow-up Has Anyone Seen My Pants? or stand-up special I Can’t Feel My Legs. Oprah fans looking for the secret to a life well-lived should probably look elsewhere, but Chelsea Lately fans looking for tales from a life lived interestingly are in for a crazy night full of stories about significantly crazier nights. $16, 8pm & 10:15pm Fri-Sat, 7pm Sun, Laugh Out Loud Comedy Club, 618 NW Loop 410, (210) 541-8805, lolsanantonio.com. — Jeremy Martin

Afro-Cuban often serves as a catchall, a placeholder to describe any advertently Latin or particularly rhythmic sound. Pedrito Martinez, as it turns out, is exactly who the term exists for. Born into Havana’s Cayo Hueso neighborhood, he adopted the West African bata drum in service of the conga and rumba rhythms churning throughout the city’s streets. Since relocating to New York, he’s expanded even beyond that blend, working his percussion touch into the bands of Paul Simon, Eddie Palmieri and even Bruce Springsteen. Since striking out on his own with the Pedrito Martinez Group, he’s further pushed the limits of the Afro-Cuban sound, blending jazz, blues, flamenco and a whole list of other styles that would make NPR commentators swoon. Now the percussionist, bandleader and occasional vocalist will bring his Grammy-nominated group to the the Guadalupe’s stage on Saturday, playing behind their excellent sophomore release Havana Dreams from earlier this year. $19-$79, 7:30pm Sat, Guadalupe Theater, 1301 Guadalupe St., (210) 226-2891, artssa.org. — J.D. Swerzenski

It has been over a year since Texas-born comedian Cristela Alonzo’s self-titled ABC sitcom Cristela was cancelled after only one season. Not only was Alonzo
the star of the show, she was also the creator, writer and executive producer, so the cancellation was extremely personal. “Since the show was named after me, the first thing I thought about was how I let the cast and crew down,” Alonzo wrote in her blog a few days after she found out her series was cut. “I thought to myself, ‘I should’ve done more to promote the show. I could’ve done more.’” Alonzo, however, had done plenty, including becoming the
first Mexican American woman ever to create, produce, write, and star in her own U.S. network TV show and doing it on her own terms. “Whether this show fails or succeeds, I want to do it my way and make sure I did everything I could to keep it authentic,” Alonzo told the Current in 2014 prior to the show’s debut. Since then, Alonzo has released her first stand-up CD through Comedy Central, guest hosted on The View and voiced an avian grandma in The Angry Birds Movie. $29.75, 7pm & 10pm, Charline McCombs Empire Theatre, 226 N. St. Mary’s St., (210) 226-5700, majesticempire.com. – Kiko Martínez

By nature of being generally older Cuban-born musicians, both Omara Portuondo and Eliades Ochoa are often grouped as ambassadors of the classic Cubano sound most popularly kept aflame by Buena Vista Social Club. What might separate the two is sheer duration. Many Buena Vista members had to come out of retirement to perform again, and, as a result, their style often represented a time capsule of a once forgotten era. Yet both Portuondo and Ochoa have been performing steadily since the outbreak of WWII, resulting in a wonderfully wide-reaching body of work adopting more steadily to different eras of the Cuban sound. Portuondo has lent her works to jazz, son cubano, and, most famously, boleros, as captured on her best-known song “Donde Estabas Tu?” Ochoa’s guitar work and rich baritone have best served to spread the son cubano sound worldwide. Together, there are perhaps no better tour guides to showcase the sound of Cuba past and present. $34.50-$150, 8pm Sat, Tobin Center for the Performing Arts, 100 Auditorium Circle, (210) 223-8624, tobincenter.org. — JDS

The 1967 graduating class of Inglewood, California’s Morningside High School voted Vicki Lawrence “Most Likely to Succeed,” but they couldn’t possibly have guessed the form this success would take. After Lawrence sent San Antonio-born comedian Carol Burnett a local newspaper article pointing out the resemblence between the two women, Lawrence was cast to play Burnett’s younger sister on the now-classic Carol Burnett Show, which she did for years, but Lawrence most famously played Burnett’s mother in a series of sketches that was later adapted into the TV show Mama’s Family. That’s of course leaving out the part in 1972 when Lawrence topped the music charts with “The Night the Lights Went Out in Georgia,” a musical murder mystery penned by her then-husband Bobby Russell. Considering the career she’s had, a solo “two-woman” show makes about as much sense as anything else, but Lawrence, in a press release, cautions: “My show is not a retrospective. It is a mixture of stand- up comedy, music and my observations about real life ... new material with a more modern and cutting edge.” She also says to “expect the unexpected” but the seniors at Morningside High could’ve told you that. $24.50-$49.50, 7pm Sun, Tobin Center for the Performing Arts, 100 Auditorium Circle, (210) 223- 8624, tobincenter.org. — JM