“An ocean without unnamed monsters would be like sleep without dreams.” — John Steinbeck

Published in April by Johns Hopkins University Press, Danté Fenolio’s Life in the Dark: Illuminating Biodiversity in the Shadowy Haunts of Planet Earth reads like an unlikely cross between a deeply informative — yet easily digested — textbook and a slick coffee table book of obscure wildlife photography. With chapters dedicated to the deep sea, freshwater habitats, fossorial wildlife and subterranean life, the book represents collaborations with ecologists, naturalists, biologists, conservationists and others who’ve facilitated Fenolio’s worldwide expeditions in search of some of the planet’s most elusive inhabitants. 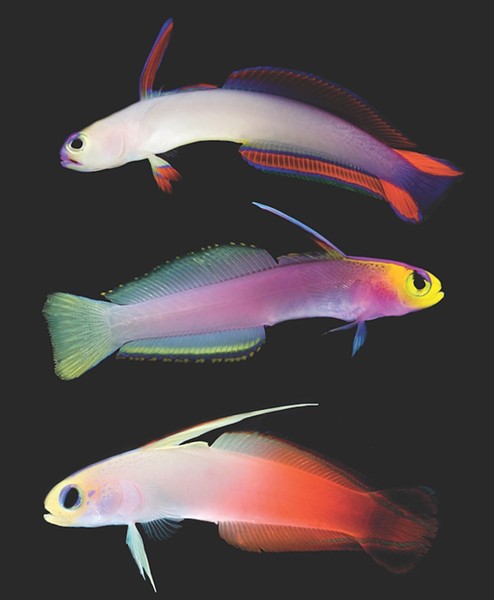 Raised among wildlife enthusiasts and armed with degrees from University of California Santa Cruz, University of Oklahoma and University of Miami, Fenolio worked as an amphibian conservation scientist and curator at the Atlanta Botanical Garden before signing on as vice president of conservation and research at the San Antonio Zoo, which helped fund some of the work collected in Life in the Dark. Rather than presenting itself as an exhaustive examination of every creature living in a lightless environment (“A more comprehensive undertaking would be beyond the scope of a book of photographs,” the author admits), Life in the Dark relies on succinct passages and the strengths of Fenolio’s captivating — and at times haunting — images.

Through crystal-clear visions of creatures clad in both flamboyant neon skins and prehistoric-looking camouflage getups, biodiversity takes center stage in a dramatic fashion — even if readers ignore the words and absorb the images simply as an impressive body of artwork. And while it digs deep into caves, termite mounds, cracks in the earth and even under our own skin to shed light on everything from parasites to subterranean salamanders, deep-sea dwellers emerge as the beautiful, strange and even terrifying stars of the show. Standing out among the most bizarre examples are female anglerfish and dragonfish — otherworldly specimens that deftly attract prey with a fishing-pole-like apparatus comprised of a long dorsal protrusion that dangles a lure filled with bioluminescent bacteria. Also known as “cold light,” the phenomenon of bioluminescence and photophores (light-producing organs that facilitate hunting, recognition and even hiding in plain sight) is perhaps the most visually fascinating aspect of how certain fish have evolved and adapted to life in lightless habitats.

After captivating readers through six photo-filled chapters, Fenolio gets to the heart of his work — conservation. “I have struggled mightily to understand why so many humans cannot see the irreparable damage we are doing to the environment,” he writes. “It should come as no surprise … that many of the species depicted in this book are encountering serious problems. Deep-sea species face contamination from things like oil spills, a never-ending rain of human trash, and damage from destructive fishing practices.” For those not concerned by environmental destruction and vanishing species, Fenolio makes a case for the importance of biodiversity in the future of modern medicine: “While I’d much prefer not to express the value of biodiversity in terms of human gain, it is the only argument some people will accept.” Likening poisonous frogs to a “pharmaceutical treasure chest well worth keeping around,” Fenolio explains the promising role amphibian skin secretions could play in treating human disease, including antibiotic-resistant bacterial strains, cancer, HIV and chronic pain. Although some of these froggy secretions are already in testing and trial phases, creating new medicines from natural extracts is a lengthy, costly process, and at least one-third of the world’s amphibian species are in decline or have disappeared.

In his closing passage, Fenolio explains that Life in the Dark is not just a showcase of the biodiversity of darkness but an urgent call to action: “My closing message is a request, a plea really, that we not only marvel at life’s wonder, but also do our part to preserve it. Your contribution to conservation, whatever it may be, will pay dividends for generations to come.”