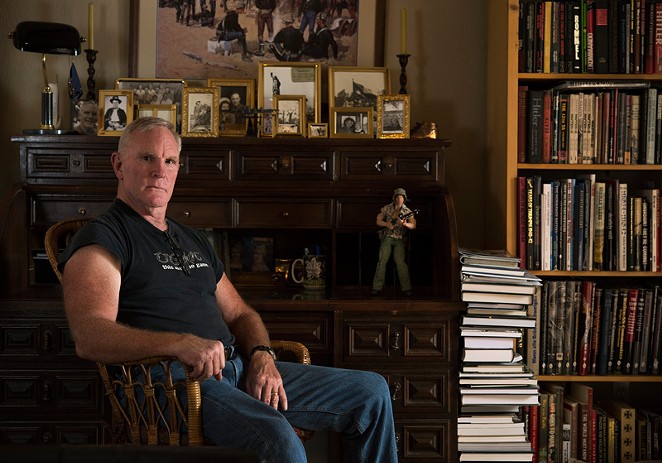 Upon graduating from Santa Barbara, California’s esteemed Brooks Institute of Photography in the 1980s, D. Clarke Evans wrote two important letters — one to the San Antonio Spurs and one to the Texas Photographic Society. Not only was he hired as the official photographer for the Spurs, he eventually became the president of the nonprofit TPS. After 26 years of documenting the Spurs, Evans stepped down from his post last year to focus on personal photography projects honoring Marines and WWII veterans. Himself a Sergeant who served in the Marine Corps Reserve from 1964-1970, Evans takes a documentary approach to both “U.S. Marines” and “World War II Veterans: A Photographic Project,” endeavors that pair present-day portraits with biographical texts culled from interviews. While one project aims to “capture the commonality of moral fiber that links Marines,” the other seeks to preserve the stories and memories of WWII vets, a population that’s dwindled from 16 million to 700,000 Americans. One of two Fotoseptiembre exhibitions hosted by the University of the Incarnate Word, Evans’ “Photographic Projects: World War II Veterans & U.S. Marines” opens in tandem with “Han’s Street Portraits,” a showcase of urban snapshots created by San Antonio-based photographer Zhifeng Han. Free, 6-8pm Fri, Aug. 26, University of the Incarnate Word, Kelso Art Center, 4301 Broadway, (210) 829-3852, fotoseptiembreusa.com.