A Rare Q&A with Sandra Cisneros 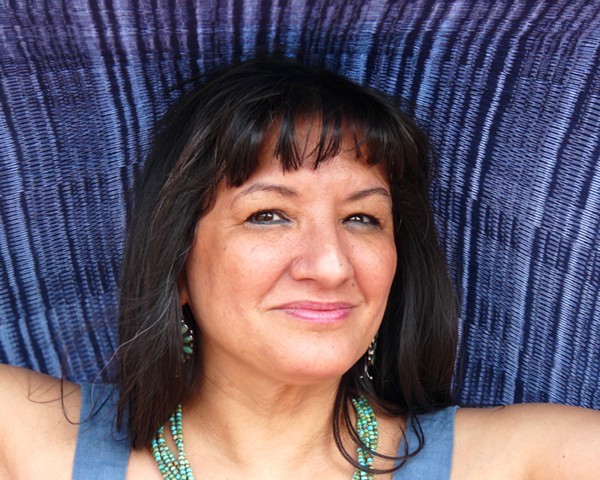 Sandra Cisneros’ nearly 30-year, on-and-off relationship with San Antonio is a dysfunctional one. Here she found enough love to move from her native Chicago in 1984 and establish her Macondo Writers’ Workshop, but also enough people “throwing rocks at you” that, in 2013, she packed her things and moved out quicker than you can say Caramelo. Even the Current took part in the rock-throwing via an infamous 1998 cover story (subtitled “¿Santa? ¿Puta? ¿Heroine? ¿Spin Artist?”) and another in 2012 (“So Long, La Sandra”) shortly after the ever-nomad departed for San Miguel de Allende, where she appears to have finally found her roots.

After much hustling, I was only able to secure a 10-minute phone interview with Cisneros — but she opened up and spoke for almost half an hour in English and Spanish about everything from José Rubén De León’s take on The House on Mango Street to her upcoming visit to San Antonio and San Marcos in October, when she’ll officially present her literary papers recently acquired by Texas State University’s Wittliff Collections. Paperback and Spanish-language editions of her nonfictional 2015 collection A House of My Own: Stories from My Life are due out in September. She’s already working on her next book, but “can’t talk about it now.”

What was your first reaction when De León approached you to direct Mango Street?

I’ve been following his work for a long, long time. He’s very professional in everything he does. There were different productions of Mango Street, some better than others, and when José approached me, I have to say that knowing the caliber of work that he does, the [Federico García] Lorca production [The House of Bernarda Alba], his music, everything, I felt I could trust him. I have a lot of confianza in him. I said yes, but told him the production I loved the most was the one Amy Ludwig created, which is pretty faithful to the book. He had a lot of great questions and suggestions about the characters. I don’t know exactly what he’s going to do, but I’m very excited because I know I’m going to see something that [has] never been done before, even though the Jump-Start production [21 years ago] was great.


Did you do anything on your end to make the play happen? José told me that, at one point, he felt he wasn’t going to be able to put the show together. Something to do with permits…

I don’t know what my agent told him, but we hold a very tight control of my stuff, my agent and I. I don’t want the wrong people to do something dreadful; we always want to keep the integrity of the piece. Permisos? No sé, la verdad no sé.

I don’t know how you feel about it, but I still feel sorry and embarrassed by the way you left San Antonio. I think some people didn’t understand we were lucky to have you here. You deserved better treatment.

As soon as I got there and for as long as I lived there, I felt I never was embraced. There was a lot of conflict, mainly in the artistic community, not the community at large. The artistic community is a small one and there’s a lot of insecurities that people have. And I understand why people would act like that. I came from outside and there is a history in Texas of people coming from outside and taking what was theirs. I do understand and have a lot of compassion for that. But I also think San Antonio has very little money and opportunities for the arts. A lot of times, a lot of people are fighting for the same scrap or job, so there’s a lot of rivalries when there shouldn’t be. I tried to do the best I could, but … Hay mucha infelicidad in the arts. I tried to do what I could to create more opportunities for artists when I got there. There’s tons of good artists in San Antonio, visual arts, but it’s not necessarily a great town in terms of opportunities for writers. We made some change through Macondo, creating a coalition of writers, but that kind of change requires a great deal of effort and cooperation from the artists themselves, and that’s hard to do without sacrificing their own writing. For me it was hard, because many people opened doors for me and helped me, many people helped my success, and you have to give back, that’s just the truth, you have to do that. In retrospect, I see there was a lot of envidia. I see I was the target of some people’s unhappiness, but I don’t think I was the source of it. I just think it was a reflection of how little there is for writers, especially in San Antonio.

Did it make you sad, frustrated, angry?

Yes, it was frustrating, and yes, all of the above, of course. You’re in the trenches and there’s people throwing rocks at you, you can’t help but take it personally. People say, “Oh, Sandra, don’t take it personally,” but still, you do. At the time, it was very distracting for the work I was supposed to be doing. But now, in retrospect, I understand how difficult it is to be a writer in the Southwest, especially a writer of color, especially now, it’s very difficult. But the little Macondo seed worked, because there are several writers who are publishing. I’m a connector, that’s what I do. I help people nourish each other.

That damn “Puta” cover … I hate it when gringos use Spanish words without understanding their meaning.

That was a reflection of the writer’s own unhappiness. I hope she found her own fulfillment as a writer. It was totally disrespectful, but I forgive that writer. I hope she finds a lot of success. I think she had an agenda before she even began talking to me. Pero que le vaya bonito. I wish her a lot of success, because once a writer finds success they don’t have to be so angry and attack others. That violence says more about her own state of being.

Are you finally established in San Miguel, Guanajuato, land of beautiful churches?

Will you be able to stay there and control your nomad spirit?

In Texas, I never felt embraced. I received a lot of support, but I felt more a parent than a daughter. If I never felt embraced in Texas after so many years, I will not find it anywhere else in the Southwest. So I came here, where I have roots. My ancestors lived here during the Mexican Revolution. At last, I feel that I finally came to the land of my ancestors. I feel a very strong connection, as if my ancestors had guided me here. But I always come back to San Antonio — which is very close — and Chicago, where I have a lot of friends … Norma Cantú, John Phillip Santos, Lionel and Kathy Sosa, Arturo and Antonia Madrid and lots of other people who helped me a lot. I don’t feel I “left” any place. You can never do things by yourself, there’s always a colectivo that helps you. And I’d rather talk about those people who helped me, instead of a few mosquitoes. I don’t have to give them any more importance. The number of people who support me is much greater than those who bother me, so I just want to send a lot of light to those unhappy mosquitos.