San Antonio is an artist's playground. Recognized on a global scale by creatives and institutions alike, the city is a hub for aspiring talent who are flocking to its wide range of opportunity. But when we think of the growing art scene here, for the most part, we think of the Blue Star Arts Complex. We think of First Friday, Artpace and our museums. Unfortunately, we don’t often enough let our minds wander to the West Side, but if there’s one thing we need to admit when speaking of cultural arts in the city, it’s this: The West Side is often lacking. Not in talent, by any means, but in resources, equipment, space and financial backing.

Partnering with Westside Development Corporation*, Alamo Colleges and the Westside Education and Training Center, La Printeria is offering a creative outlet that sets them apart from other institutions and community groups that have long kept art alive on the West Side, like the Guadalupe Cultural Arts Center, San Anto Cultural Arts and the MujeresArtes Studio. Armed with the largest screen printing station in the city, Harvey Mireles and La Printeria's backers are fixing what they see as a lack of arts programming for the West Side community by creating a new nonprofit that aims to transform the Edgewood community.

In the back of the WETC building, a former elementary school, you’ll find a gym that's recently been transformed into a printmaking studio, lined with equipment for poster, textile and woodblock printing. The goal for the creative space is a fresh concept: to create a workspace that teaches the technical skills of printmaking, solidifies those skills with business basics, and provides students with opportunities for continuing education through Alamo Colleges while offering real-world experience by eventually operating La Printeria as a professional, nonprofit printmaking studio that can handle clients throughout the city.* 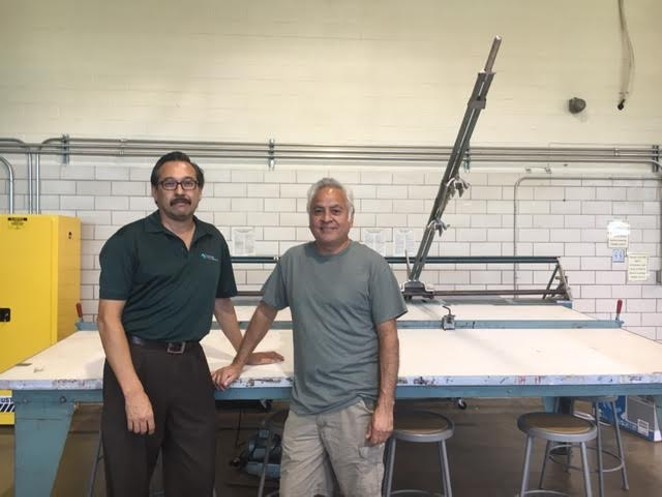 Designed to be accessible to Edgewood community members, disadvantaged youth and WETC students, La Printeria is open to anyone else who wants to get in on the collaborative space. When asked about the possibility to expand the program to include other forms of visual arts, Mireles enthusiastically responded with, “I don’t ever want to say ‘No’.”


A product of the Edgewood community, Mireles, who previously served as executive director of San Anto Cultural Arts, didn’t hesitate to admit that he got into trouble while growing up on the West Side, which he says is a motive for opening La Printeria. By bringing art to one of the most impoverished parts of San Antonio, it’s the goal of the studio's organizers to provide an outlet for kids who might otherwise head down the wrong path.

This Saturday, Sept. 24, will mark the opening day for La Printeria and its companion gallery, Galleria 237, which is also located in the WETC building, taking the place of an old auditorium, with Noche Buena: A One Night Exhibit at Galeria 237.

—
*Clarification 9/21/16 @ 10:10am: The original version of this story said La Printeria had plans to operate as a commercial business.
*Updated @2:15pm to include the Westside Development Corporation's connection to the project.