"The Hollars" Started with a Good Recipe, But the Finished Concoction is Badly Overcooked 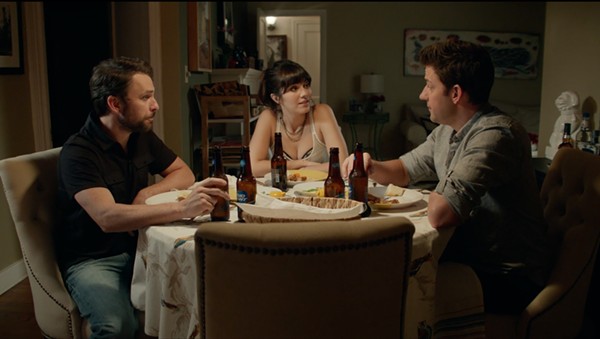 The Hollars wants to have its cake and decorate it too.

The second directorial effort of John Krasinski, best known for playing Jim Halpert in The Office, has the makings of a tasty dramedy about two brothers and their parents, but after adding no less than a dozen often unfunny subplots featuring a wife, an ex-wife, an ex-fiancée, children, a doctor, a nurse and even a youth minister, the film collapses like a poorly prepared soufflé. The recipe – particularly the acting ingredients of Richard Jenkins and Margo Martindale – might have looked good on paper, but the finished concoction is badly overcooked and saccharine.

Krasinski plays John Hollar, a 30-something graphic novelist who returns to his small hometown after his mother is diagnosed with a brain tumor. Facing an uncertain career and the imminent arrival of a baby with his girlfriend, played by Anna Kendrick, his life is made even more complicated by his mom’s health scare, his dad’s pending bankruptcy, his brother’s stalking of his ex-wife and his own ex-fiancée’s inappropriate advances. It’s all a bit too much for an 88-minute film to handle.

“Where have you been our whole lives?” asks older brother Ron (portrayed with over-exuberance by Sharlto Copley) of their dad (Jenkins). “I’ve been working to send you guys to college,” he replies before slapping his son, while the gravely ill mother (Martindale) watches from her hospital bed.

Their dysfunction is crystal clear. What’s not clear is whether these moments are being played for drama or comedy, because neither quite works. Yes, there are touching moments between Jenkins and the impeccable Martindale, and Krasinski himself has great chemistry with both. In fact, these and other serious moments almost succeed in turning the film into the indie drama it should have been, but, particularly at the end, the movie always returns to unbelievability and misplaced comedy.

The film’s low point is its ridiculous subplot involving the grossly unfunny and unnecessary Charlie Day, who plays Jason, a nurse caring for Mrs. Hollar. By coincidence, the dude is married to John’s ex-fiancée, Gwen. While Jason first bristles at the mere presence of John, he then seems open to having him over for dinner, during which Gwen kisses John and confesses that she wants to be with him and not Jason, before disappearing from the film, never to be heard from again. I don’t know whether the writer (Jim Strouse) or the editor (Heather Persons) is to blame, but that scene – and two or three others that stretch credibility and disrupt the film’s tone – should have been removed, along with the mom’s brain tumor.

The film is also annoyingly peppered with pop songs, as if the filmmakers were unaware that scene transitions could be structured sans music. (Oh, Graduate and Easy Rider, what hath thou wrought?)

Krasinski’s heart was in the right place with his sophomore endeavor, but, like his character’s hospitalized mother, his cranium just wasn’t up to the task.