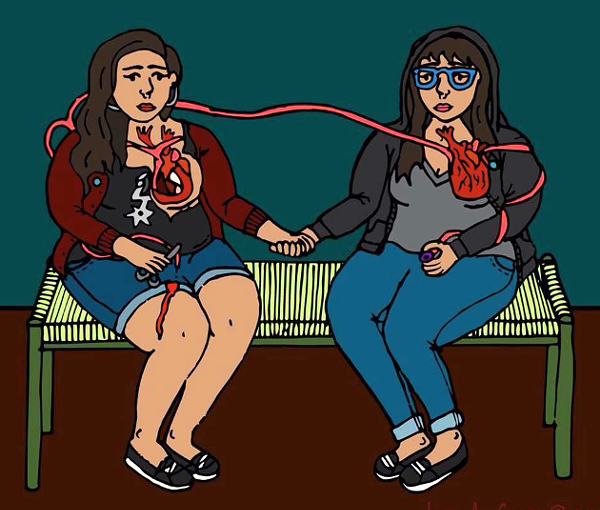 If you look up "chingona" online, the first definition you’ll find is this: "word used in Mexico for 'a really fuckin cool girl.'" And while that is, for the most part, true, it hardly scratches the surface of what it really means to be chingona, where the word comes from and how it’s being used today.

That limited definition fails to acknowledge an entire movement associated with the slang term, including its ability to build communities and its power to elevate women of Latina background. Nowadays, to be called chingona is to be regarded with the utmost respect and is considered an honor, but that wasn’t always the case.

Growing up in a household where Spanish was sparse I heard chingona used in two ways: 1. to describe a woman who thought she was a badass, or 2. to describe a woman who got into trouble. Never was it used as a way for a woman to describe herself. So when I saw postings for La Botanica’s celebration of Chingona Fest and local band Lloronas’ Night of the Living Chingona pop up in my newsfeed, I’ll admit that I was taken aback. So, to get a better understanding of the word, I talked with with the members of Lloronas, Amanda Vega, Amanda Correa, Honora Sanchez and Jassiel Gomez; Cristina Martinez, the mujer behind VeryThat and co-organizer of the San Antonio Chingona Fest; Isabel Ann Castro and Natasha Hernandez, creators of St. Sucia and Night of the Living Chingona participants; and Cordelia Barrera, Latino/a literature professor at Texas Tech University.


“[The word chingona] was used against women who couldn’t be controlled,” says Honora Sanchez, bassist for Lloronas. In her understanding, chingona was previously used to shame women who might have come off as hard-headed or difficult, but now, she says the term is breaking stereotypes. It’s a way to tackle aspects of feminism within Latina culture, by turning this once-derogatory term into a positive word of empowerment. The band agreed that by calling yourself chingona, a woman is destroying social expectations of what is “ladylike” and in doing so, is taking down the patriarchy. But it's more than that — it's also about celebrating the matriarch. At least, this was the case for Cristina Martinez.


Growing up, Martinez’s mom often referred to her as a chingona, using the word as praise or way to recognize hard work. She says she never knew the word had a negative connotation until she was older and people started questioning her work —

But it was clear to me that for Martinez, chingona is not just about her mom's recognition, it’s about the community. Throughout our conversation, she referenced at least a dozen other women, all of which she considers chingonas that are reclaiming this word through art, poetry, music and community awareness. When asked about the other organizers behind San Antonio’s first Chingona Fest, “they had my back like a lawn chair,” she says. “It’s so important to support your local chingonas.” And no pair illustrated this support to me better than the girls behind St. Sucia,

a local zine that is now taught in college classrooms and sold internationally.

I thought I had a definition figured out by the time I met with Isabel Ann Castro, St. Sucia's art director and Natasha Hernandez, editor of the zine, but each woman added something new to the conversation. For Hernandez, anyone who finds power in the word has the right to call themselves chingona. If not, then what are words of empowerment for? She recalls times she used the word to get through the day, because by calling herself chingona, she was saying, “I’m a boss-ass bitch and I’m gonna get shit done.” In her opinion, chingona is for everybody, and nobody should be denied the ability to use the word to recognize and appreciate one’s self.

For Castro, however, chingona is the holy of holies. The only woman she calls chingona is Frida Kahlo, and instead of looking in the mirror and giving herself a daily reminder of how badass she is, she thinks the word is something you strive to be. She's an accomplished artist with an array of talents, however, she says she’s far from calling herself chingona. When asked how Latinas are reclaiming this word, she says it wouldn’t be possible without the Internet and the way we communicate today.

"In the digital community," she says, "connections are built and that equals visibility." Which is something that Professor Barrera's generation didn't have.


"We've got all those mirrors today," Barrera says, referring to society's current fixation with selfies, Facebook, Instagram, etc. Growing up in Laredo, she heard the word chingona, but never in the fashion that we see it today.

"It's been appropriated by a younger generation," she says, "as a way of rebellion."

Barrera emphasized that this shift in meaning is only possible when you have a community that supports each other, one that can collectively stand up and say, "Fuck you, we're taking it back."