"Keeping Up With The Joneses" Gives Us Yet Another Dumb, Immature Man-child 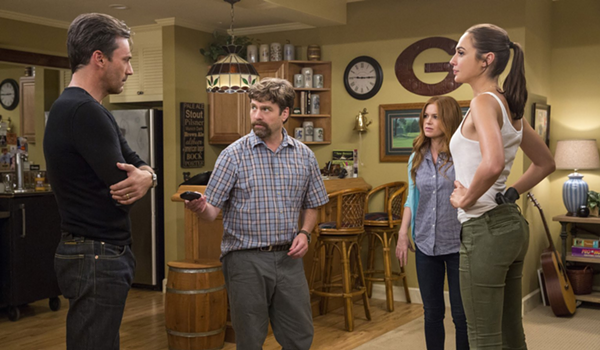 Keeping Up With The Joneses is dreadful, with a plot that is both inept and full of holes. Throughout, I could hardly muster a giggle at any of the would-be jokes. Nothing about it is fun, dynamic or interesting. The only people who should see this are those who either 1) hate themselves, or 2) love really terrible movies (and no, this isn’t even enjoyable in a “so bad it’s good” kind of way).

The movie has a decent cast. But Jon Hamm looks lost. Isla Fisher looks uncomfortable. Gal Gadot isn’t sure how sexy or sweet she should be, so she ends up not being much of either. The real problem, though, is Zach Galifianakis. His immature, dumb man-child screen persona hasn’t been funny since The Hangover (2009), and it sure as heck isn’t funny here. It is instead annoying and insulting to the audience’s intelligence, and given that we leave our brains at the door for a movie like this, that’s saying a lot. Galifianakis needs to play a different character or people will grow to hate him and boycott his movies.

The weak plot has a conceit that could’ve worked with better writing, directing, cinematography, and overall execution of the basics of filmmaking. Jeff (Galifianakis) and Karen (Fisher) are boring suburbanites whose two kids are conveniently sent off to summer camp. They have new neighbors in their cul-de-sac at the end of Maple Circle: Tim (Hamm) and Natalie (Gadot) Jones. The Joneses are a seemingly perfect couple, he a travel writer and she a social media director who helps Sri Lankan orphans. They’re also, as we know from the trailers and the movie’s poster, spies.

They’ve lived in 30 cities in 10 years, and nosey mega-mom Karen catches on to their secret right quick. She’s not super smart or intuitive, however. It’s more a case of the Joneses being laughably terrible at remaining covert. In one scene, the Joneses remove an important briefcase from a car trunk while standing at the foot of the driveway. They have a garage, but apparently doing this so everyone in the cul-de-sac can see is appropriate. For a while I thought they wanted Jeff and Karen to know the truth. Turns out that was wrong – they’re just hopeless at keeping their cover, which probably makes them the world’s worst spies.

Director Greg Mottola (Superbad) and writer Michael LeSieur (You, Me and Dupree) give the actors little to work with, including stilted and unfunny dialogue. The action scenes are the most boring I’ve seen this year, and the lack of logic in the story is confounding. What’s more, whereas the guys drink snake wine and go indoor skydiving (which would’ve been a perfect setup for real skydiving in the finale, but the writers weren’t clever enough for that), the women have scenes of lingerie shopping and kissing. Worse, in one notably unsexy moment, they practice kegel exercises together. Perhaps the script was written in 1981, but here in 2016 we’re socially trying to move past the egregious objectification of women, especially when there is no commensurate objectification for men in the same work. The women are gorgeous so the scene(s) will sound pruriently appealing, but when you think about it they’re also despicable and unnecessary.

Keeping Up With The Joneses is the kind of movie that forces the cast and filmmakers to take a good, hard look at themselves in the mirror. Pretty much everything went wrong here, and the darkened, foul-smelling stain that is the 101 minutes of this picture will follow them forever.