10 Events to Check Out This Week

Decades before the dawn of RuPaul’s Drag Race, British playwright Richard O’Brien’s The Rocky Horror Show challenged the status quo and championed a similar message of self-acceptance. Both the Logo reality series and the 1973 musical transcended their early cult status to become icons of pop culture. In 2012, director Greg Hinojosa, then with the Woodlawn Theatre, tapped into the allure of these two cultural mainstays, casting RPDR alum Sharon Needles in that year’s production of Rocky Horror and sparking what is now an annual fan favorite. Hinojosa now brings his ever-evolving adaptation of Rocky Horror to the Josephine for a five-night run, this time bringing local nightlife promoter Rey Lopez on board as co-producer. While remaining tight-lipped on this year’s theme, Hinojosa said it will be partly inspired by the personal histories — and controversies — of the leading cast members. Taking the stage this year will be Latrice Royale as Dr. Frank N. Furter, Ginger Minj as Magenta and Phi Phi O’Hara as Columbia. “When you see them in a theatrical setting, it opens up the perception that these are more than drag queens,” Hinojosa said. “They are actors and singers.” $20-$100, 8pm Tue, Oct. 25, 8pm Wed, Oct. 26, 8pm Thu, Oct. 27, The Josephine Theatre, 339 W. Josephine St., (210) 734-4646, josephinetheatre.org. Through Oct. 29. — Marco Aquino

Sam Mendes’ terrific 1993 production of Cabaret accomplished the seemingly impossible: It actually rivaled the artistic success of both Hal Prince’s original production of ’66 and Bob Fosse’s award-winning film adaptation, starring a particularly leggy Liza Minnelli. For this re-imagining, Mendes upped Cabaret’s sheer sleaziness as he parked the show in Manhattan’s legendary Studio 54 for a multiple-year run. The New York incarnation won Tony awards for its young, gender-bending emcee, Alan Cumming, as well as for Natasha Richardson. In an unusual move, the Roundabout Theater has revived this revival of a London revival, which makes it a head-spinningly meta-revival. But fret not: It’s still as fabulously gay as ever, as the sexual anarchy of the Weimar Republic is juxtaposed with the increasing militarism and bigotry of the German Nazi party. The brilliance of Cabaret is that the cabaret itself functions as a metaphor for political apathy of every stripe — and Mendes’ harrowing coda, with its gesture toward the Holocaust, remains one of the masterstrokes of contemporary musical theater. If you’ve been on the fence about seeing yet another Cabaret, discover a production where both the staging, and “life” itself, are beautiful. $30-$125, 7:30pm Tue, Oct. 25, 7:30pm Wed, Oct 26, 7:30pm Thu, Oct. 27, The Majestic Theatre, 224 E. Houston St., (210) 226-3333, majesticempire.com. Through Oct. 30.
— Thomas Jenkins 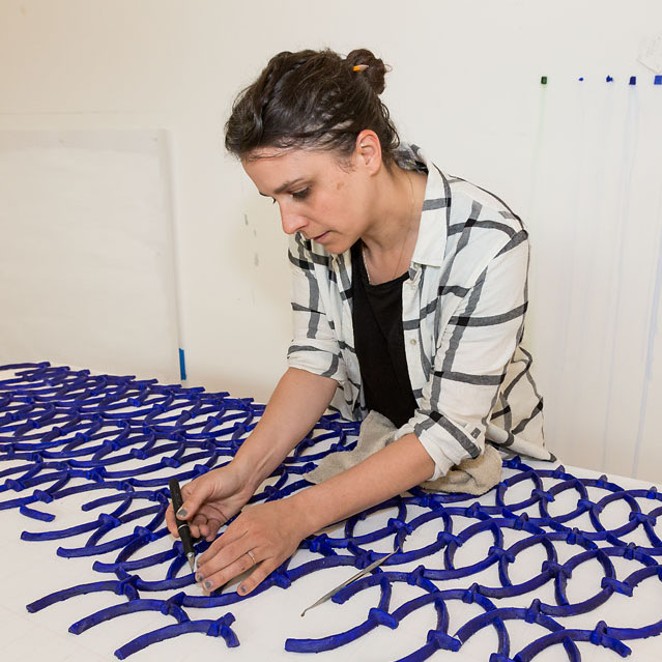 The Black Lillies are a rowdy band of rolling stones from Knoxville, Tennessee. Crooning honky-tonk tunes for the thinking man, the band is known for lighting up dusty Southwestern bars and major music festivals alike. While The Black Lillies’ exuberant stage presence appeals to younger audiences, the easygoing fans of Chris Hillman and Gram Parsons also appreciate the group’s effortless integration of Appalachian twang and rollicking folk rock. Well-versed in the grit and grind of pioneers like Buffalo Springfield and the Byrds, the group remixes the hackneyed themes of stadium country into upbeat songs like “Hard to Please,” the titular track of the band’s latest studio album. $8-$12, 8pm Thu, Oct. 27, 502 Bar, 502 Embassy Oaks, 502bar.com.
— Abby Mangel

Ermano Olmi’s 1961 film Il Posto tells a touching, quiet, and humorous coming-of-age story about Domenico (Sandro Panseri), a young Italian man who still seems like a boy. When he leaves his small town to live and work in Milan, he must navigate a bureaucratic corporate world, make sense of a blossoming romance, and adjust to his newfound, if somewhat forced, adulthood. The McNay screens the classic as part of its Get Reel Film Series. Free, 7pm Thu, Oct. 27, McNay Art Museum, 6000 N. New Braunfels Ave., (210) 824-5368, mcnayart.org. 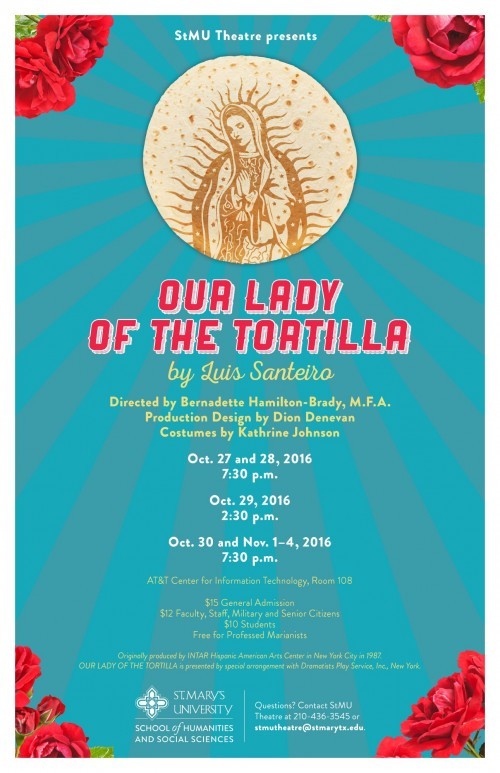 The St Mary’s University Theater Department’s fall production, Our Lady of the Tortilla by Luis Santeiro, opens Thursday, with shows every day (except October 31) through November 4. A riotously funny but nevertheless poignant affair, the acclaimed play zooms in on the Cruz family during a particularly eventful weekend. While the youngest son brings home his WASP girlfriend and frets over seeming too Mexican, the oldest son shows back up with his failed life and knocked-up girlfriend, and the mother longs to recapture her wayward husband. But, everything is thrown into a disarray of biblical proportions when Dahlia, the matriarch’s old-maid sister, sees an apparition of the Virgin Mary on a tortilla, bringing reporters, pilgrims, and much conflict to the household. Perfectly-timed as we all prepare to be around our families for the coming holidays, Our Lady of the Tortilla is farcical on physical and dialogue levels, even as it presents spot-on ruminations on belief, family, love and cultural identity. $10-$15, 7:30pm Thu, 2:30pm Sun, 7:30pm Tue, AT&T Center for Information Technology, St Mary’s University, One Camino Santa Maria, (210) 436-3453, stmarytx.edu. Through November 4.
— James Courtney

The Department of Fine Arts at San Antonio College opens its 2016-17 season with the classic horror story Dracula, written for the stage by Steven Dietz and directed by SAC drama professor Ronald Wilson. A sense of dread and terror follow the mysterious Transylvanian count as he arrives in London. Can he be stopped before catastrophe falls on the Victorian city? $5-$10, 7:30pm Thu, Oct. 27, San Antonio College, McAllister Auditorium, 1819 N. Main Ave., (210) 486-0000, alamo.edu/sac. Through October 30.

Once deemed too raunchy and startling for audiences, Georges Bizet’s renowned opera Carmen comes to light on the Tobin’s stage courtesy of OPERA San Antonio. First performed in 1875, Carmen is a fantastic spectacle with all the elements of drama designed to draw you in: a love triangle, sex and passion, intrigue and the ultimate femme fatale — the sensual gypsy Carmen. Chances are you’ll recognize some of the beautiful melodies even if you think you know nothing about opera. This production sets the story in the 1920s and ’30s though it was originally set about a decade earlier. Newcomers to opera will still see a faithful representation of the original story albeit jazzed up with flapper dresses and roaring speakeasies. Carmen showcases both international and home-grown talent, with the extraordinary voices of Kirstin Chávez, well known for her portrayal of the title role internationally, and Ryan Speedo Green, arriving directly from the Met, backed by a chorus that includes 40 San Antonio natives, many students from UTSA, UIW and Trinity, as well as young voices from the Children’s Chorus of San Antonio. $35-$199, 7:30pm Thu, Tobin Center for the Performing Arts, 100 Auditorium Circle, (210) 223-8624, operasa.org. — Rachel Cooley 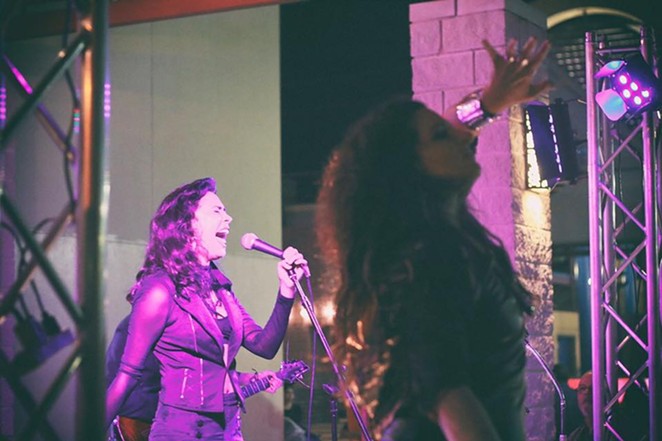