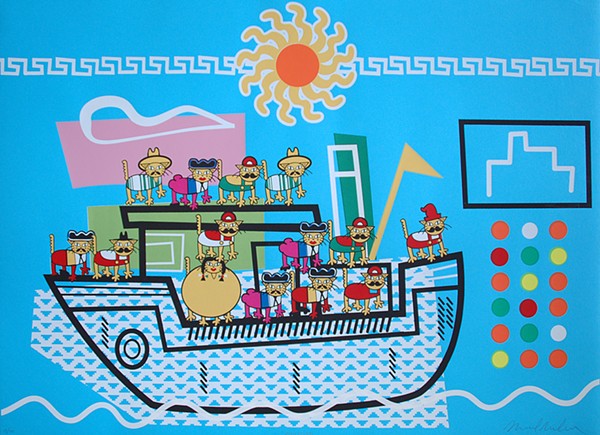 French writer and existential philosopher Simone de Beauvoir famously quoted in The Second Sex: “One is not born a genius, one becomes a genius.” An established veteran of San Antonio’s indie rock scene, Nina Diaz deserves her reputation as a musical genius in the making. The critically acclaimed Girl in a Coma alumna is celebrating the release of her first solo album – The Beat is Dead – with a concert at the distinguished Tobin Center for the Performing Arts. Deeply affecting, this latest album portrays the artist’s grueling journey toward sobriety through electrifying tracks that push the listener’s emotional extremes. Feel the sound and fury for yourself in darkly emotive head bangers like “Rebirth” and “Screaming Without a Sound.” In this rousing spectacle, Diaz’s seductive showmanship is sure to inspire fans, both new and old. $15, 8pm Fri, Tobin Center for the Performing Arts, 100 Auditorium Circle, (210) 223-8624, tobincenter.org. — Abby Mangel

Click here for our cover story on Nina Diaz.

Perhaps no other late-night comic has articulated the absurdity of the so-called “trans panic epidemic” better than The Daily Show’s Trevor Noah. In an episode that aired earlier this year, Noah lambasted supporters of the many anti-LGBT “bathroom bills” being proposed around the country. “If you replace ‘transgender’ with any other group in society, you realize that we’ve been here before,” Noah said. “We’ve had this conversation about minorities before … Society has done this over and over again. The same thing was said about black people … We cannot think of why anyone wouldn’t have wanted multi-racial bathrooms.” An offshoot of his one-hour Comedy Central special covering “everything from terrorism to police brutality to Ebola to his grandmother,” Noah — who was notably the first South African stand-up to appear on The Tonight Show and the Late Show with David Letterman — brings his Lost in Translation Tour to the Tobin. $38-$58, 8pm Fri, Tobin Center for the Performing Arts, 100 Auditorium Circle, (210) 223-8624, tobincenter.org.
— Marco Aquino

As giddy geeks across the Southwest prepare for San Antonio’s largest and most popular comic-book convention this weekend, it’s anyone’s guess as to how massive the turnout is going to be for the fourth annual event (85,000 attendees showed up in 2015). “I’m excited that more and more San Antonio residents are coming to ACCC every year,” Apple de la Fuente, ACCC festival director and founder, told the Current last week. “As we continue to grow, we’re also getting the chance to show off our beautiful city to top-name artists and celebrities. We hope to break our record from last year and it looks like we are on track to do just that.” So, what is it exactly that has so many fans ramped up this year? Along with a full slate of guest artists and writers from publishing houses like Marvel and DC, expect a convention floor brimming with creative cosplayers, fanboys and fangirls lining up to meet, take photos with, and get autographs from their favorite TV, film and pop-culture celebrities, including the young cast from the hit Netflix original series Stranger Things (Millie Bobby Brown, Gaten Matarazzo, Caleb McLaughlin and Noah Schnapp). Also on the roster: David Tennant (Doctor Who, Jessica Jones), Charlie Cox (Daredevil), Gotham stars Camren Bicondova (Catwoman) and Cory Michael Smith (Edward Nygma), Ralph Macchio (The Karate Kid), Billy Dee Williams (Star Wars), Margot Kidder (Superman), wrestlers Ric Flair and Sting, and San Antonio’s own Summer Glau (Serenity) and Peter Weller, (Robocop), not to mention every current millennial’s nerdy crush of the 1990s, the Pink Ranger herself, Amy Jo Johnson (Mighty Morphin Power Rangers). And that’s just for starters. Let’s not forget a special Saturday-only appearance by Kim Jong-un’s BFF and cuddle buddy, five-time NBA Champion and former San Antonio Spurs forward Dennis Rodman. While he’s here, remind us to tell him, “You’re welcome!” Thanks for nothing, Will Perdue. $15 (child pass), $30-$40 (one-day pass), $80 (three-day pass), 11am-8pm Fri, 10am-7pm Sat, 11am-6pm Sun, Henry B. Gonzalez Convention Center, 900 E. Market St., (210) 207-8500, alamocitycomiccon.com. – Kiko Martinez 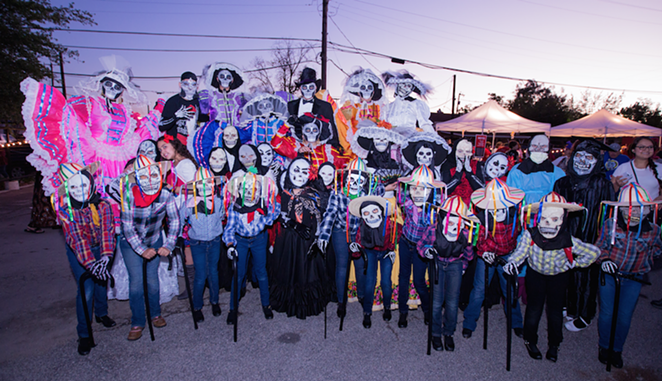 After a couple of road games in California to open the season, the Kawhi Leonard era officially tips off in San Antonio for the Spurs this Saturday. Leonard is coming off his first All-Star campaign and wisely passed on the Olympics in Rio to spend time with his newborn daughter. In the absence of Tim Duncan, the Spurs will count on Leonard to continue to grow as leader, as his polished game steadily evolves. Regarded by many as the best two-way player in the NBA, Leonard enters the season with a shot at a rare third-straight Defensive Player of the Year Award. A trio of fresh big men including former All-Stars Pau Gasol and David Lee, along with newcomer Dewayne Dedmon, arrive to reinforce the paint for a Spurs defense that, like Leonard, will be critical to San Antonio’s success this season. $35-$1,000, 7pm Sat, AT&T Center, One AT&T Center Pkwy., (210) 444-5000, attcenter.com.
– M. Solis

One of the best things about Halloween is the opportunity to pretend to be someone (or something) else. When we play new roles — aside from it just being fun — we are able to release stress, practice creativity and even expand our capacities for empathy (in a light-hearted kind of way). For the second year in a row, Paper Tiger is throwing a Halloween bash that truly celebrates the act of becoming something else for a night. Their multi-faceted Night of the Creeps II features a costume contest, artwork by 10-plus local artists (Angela Fox, Regina Morales and Inés Estrada among them), and a massive live music lineup. But, don’t just expect to catch your favorite local bands doing their typical thing. This unique show sees each band dress up as, and play the music of, a band of their choosing. There are plenty of acts to look forward to, including The Grasshopper Lies Heavy as Local H, Flower Jesus Quintet as The Velvet Underground, The Bolos as Devo, Sailor Poon as The Cramps and Cannibal Bitch as Butthole Surfers. Free, 6pm Sat, Paper Tiger, 2410 N. St. Mary’s St., papertigersa.com. — JC

The tastemakers and trendsetters of K23 Gallery are waking the dead this Halloween weekend with their devious Trip or Treat showcase. Christian Bland and the Revelators usher in the dark night with brooding beats and demonic drones. The group started as an independent project of the Black Angels’ guitarist, Christian Bland, a prolific shoegazer who founded Levitation (formerly known as Austin Psych Fest) alongside the aptly named Reverberation Appreciation Society. Drenched with obscured vocals and heavy guitar riffs, Christian Bland summons supernatural vibrations in ominous tracks like “Black Crayon.” Drifting through the air like the wispy smoke of a burning cigarette, the song feels like a midnight drive through a sinister dreamscape. The synthy savants of Verisimilitude keep it real with Christian Bland at K23, the hotbed for live and local music in Beacon Hill. $7, 9pm-1am Sat, K23, 702 Fredericksburg Road, (210) 776-5635, k23gallery.wixsite.com/k23tx. — AM 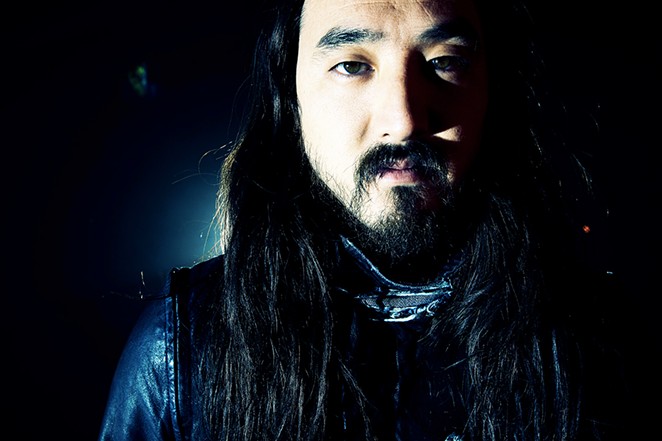 If it feels like San Antonio is quickly morphing into a legit music festival destination ... well, that’s because it kind of is. Consider the annual Maverick Music festival, which grew from headlining acts like Gary Clark Jr. and Girl In a Coma (while nothing to sneeze at, still local/regional talent) to the main draws being the Flaming Lips and Public Enemy in just a few short years (as we write in this week’s music section, Maverick’s new partnership with the Tobin Center is an encouraging sign next year will be even bigger). But no one’s ever tried quite exactly what Scoremore Shows (the young, premier hip-hop promoter in Texas) is hoping to pull off with the Mala Luna Music Festival. The first large-scale music fest to take over the old Lone Star Brewery touts a remarkable lineup for EDM- and hip hop-loving crowds alike. Top headliners include Kaskade, Houston phenom Travis Scott (who just finished a tour with Rihanna) and the indefatigable Steve Aoki alongside rappers Kevin Gates and G-Eazy. Not forgetting San Antonio’s homegrown talent, local artists IVY, VI$ION, Greg G, Mitch James, KWYK, and Phillip Wolf are all slated to perform. With a mix of EDM and hip-hop, it appears that Mala Luna will be something of a sister festival to Scoremore’s annual El Paso throw-down, the Neon Desert Music Festival. We say it’s about time we got our own. $89-$399, noon-10:45pm Sat-Sun, Lone Star Brewery, 600 Lone Star Blvd., malalunamusicfestival.com.

Click here for our rundown of acts to see at Mala Luna.