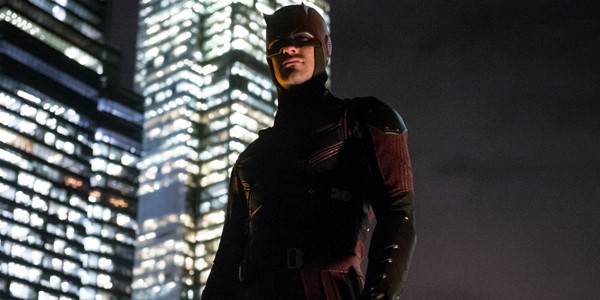 When it comes to superheroes on the small screen, they don’t get much bigger than Netflix’s Daredevil. Leading the way as the show’s title character is British actor Charlie Cox, 33, one of the celebrity guests who will be in attendance at the 2016 Alamo City Comic Con this weekend to meet fans, sign autographs, take photos and participate in a Q&A panel.

During our own Q&A with Cox last week on the phone, the Current talked to him about his newfound appreciation for comic books, the limited stunt work he’s been allowed to do on the show and what he’s looking forward to when he reprises his Daredevil role on the upcoming Netflix superhero series The Defenders.

We’re around the same age and like you I didn’t grow up reading comic books. Do you think we missed out on a major part of our childhood because we weren’t exposed to comics?

(Laughs) I actually do, man. Since I got the role, I started reading a lot of comics for research purposes. But when we’re not shooting and I have a few months off, I find myself constantly going back to the unlimited Marvel account I’ve been given and reading lots of comics and catching up. I do feel like I missed out on something a little bit. There is a great culture and community of comic-book readers who enjoy what I’m enjoying now when they were kids.

See, you actually had a really good reason to pick up comic books as an adult.

You know, it’s a bit like a really good HBO or Netflix series. If you read one, you’re not going to be hooked. It’s a slow burn. You have to remember, when comic books [initially] came out, they came out every month. You really had to wait. Often a story is 6-10 issues long. That’s like half a year or a year of your life that you’re waiting for this story to unfold. That’s a huge amount of investment. I don’t think one can quite appreciate what that’s like until you’ve really given it a good run for its money.

So, if it wasn’t comic books, what’s the nerdiest thing you did as a kid?

You know, I don’t know if nerdy is the right word. I was a big sports fan. I was a huge soccer and rugby fan. I’d do anything to play sports. That’s all I was thinking about. That was kind of my great passion. It still is. On a Saturday or Sunday morning, I’ll always be in front of the TV watching my soccer teams playing.

Do you play, too?

I don’t get to play a lot of organized sports anymore mainly because it would be too risky with the filming schedule. I’m not sure my bosses would be very happy if I got injured playing soccer on a Sunday evening.

On that note, I know you have a stunt double that works on Daredevil with you. Is it your call when you want to step in to do your own stunts or is someone else making those decisions for you?

(Laughs) No, I wish. If it was up to me, I’d be long gone. (Laughs) There’s a lot of things I’ve asked to do and they look at me like I’m insane. I’m just not physically capable.

There was a scene in Season 1 where my character has to run and almost jump over a car. I managed to convince them this one time that I was going to be able to do it. I do think of myself as quite athletic. But there is a difference between being athletic and someone who is trained in this stuff and has been doing it for years and years. So, they gave me a go and I ran and jumped and slipped and cracked my head. I wasn’t badly hurt, but after that they were like, “No way.”

There was also a scene in Season 1 where my character gets thrown through a coffee table. When that happens, they build these coffee tables out of balsa wood so they disintegrate quite quickly. But they’re quite expensive to make, so we only had three of them. They can’t really risk me doing it because if I do it wrong, [a table] is wasted. So, they did it with my stunt double. But there was this one occasion where he did it perfectly in the first take. They had two more of these coffee tables, so they let me have a go. That was one of the big stunts I was able to do. They threw me through this coffee table and it exploded. It was fun.

I read that you didn’t know much about the character before you started shooting the series and didn’t even know the character was blind. How did you find out?

Yeah, it was a bit confusing. I was going through the audition process at the beginning of this whole journey and there was obviously a lot of secrecy around this character and the show. They weren’t revealing to everyone that they were making it. There were a lot of code names involved. They told me they believed it was a Marvel superhero and that it was Daredevil. A friend of mine told me he read Daredevil comics when they were growing up and that they were pretty sure he was blind. I thought, “Nah, I think they would’ve told me if that was true.” So, I emailed to find out and they were like, “Yeah, he’s blind.” I had to very quickly figure out how I was going to do that for the purposes of the audition.

I’m assuming the skill it takes to play someone who is blind just from a technical standpoint wouldn’t be something that comes natural. Was that one of the more challenging aspects of the character?

Yeah, but once I got the part I had a lot of time to play around with that. I worked very closely with a gentleman who has been legally blind for a number of years. So, yes, that took a lot of studying. I think it was something that was important to get right for it to feel authentic. I spent a lot of time working on that.

In a past interview, you said, “I don’t feel like I’m famous.” How do you think being famous is supposed to feel?

Yeah, good question. I don’t know really. I think when you’re growing up and you think of someone who is famous, you think of someone who, every time they leave their apartment, there’s paparazzi and people screaming and lots of camouflage and sunglasses and all that sort of stuff. That’s not my experience. I’m just not that famous. People occasionally say hello to me on the street and say they like the show or they recognize me and say, “Hi, Daredevil.” But it’s not intrusive. It’s actually nice and quite friendly. It doesn’t actually affect my life.

I’m guessing you probably feel a bit more famous, though, when you attend comic cons, yes? I mean, you have thousands of fans who are invested in the genre you work in who are going to be there.

Yes, that is a good point. When I go to [comic con] events, that’s probably what it feels like to be George Clooney every day. (Laughs) It’s an event where people know you’re going to be there and they probably watch your show because it’s a genre piece and conventions are for lovers of genre television. You’re instantly more recognizable. I said to a friend of mine the other day, normally the people who tell me they love the show are my friends and family who have to tell me that because they’re my friends and family. When I go to these comic con conventions, we get to hear the fans say they really do love the show. That’s immensely gratifying because we care so much about it. We want it to be good. We want people who love the character to be pleased. It’s lovely to hear.

Is there anything specific you’ve learned about the audiences that go to conventions?

They’re passionate. They’re a passionate crowd, for sure. I feel for the most part that the show has been very popular and has been very well-received by the fans. So, I feel like those fans are very loyal. They watch the whole series back to back and multiple times and they’ll tweet and talk about it. That’s everything you’d hope for when you do a show. You hope that it’s going to be popular and good and that the fans are going to care.

Most people, of course, know you for your role on Daredevil, but if you could point them to a past project they might not have seen, what would you want them to check out?

That’s a good question. I had a really good time on Boardwalk Empire. That was a really fun character for me to play. It was different. You know, I did a film in 2006-2007 that hasn’t been seen by many people, but actually is a really sweet film. It’s a genre piece called Stardust. I think a lot of people who do end up seeing it really appreciate it.

Congratulations on becoming a new father. I’m not sure if you had a boy or a girl, but have you found the newborn Daredevil or Elektra costume he or she will be wearing for Halloween?

(Laughs) You know what! We’ve been given a few. My favorite one is one that my agent gave me. It’s a little baby onesie that says, “If you don’t believe in superheroes, you should see my dad.” That’s pretty special.

Actress Sigourney Weaver was recently cast as a villain in your new upcoming Netflix show The Defenders. Do you think she is still as badass today as she was when she played Riley in the Alien franchise?

You know, when she came on stage with us at New York Comic Con, I wanted to say, “In Hell’s Kitchen, no one hears you scream.” I don’t think it gets better than Sigourney Weaver. I think we are immensely lucky to have her. It’s a testament to shows like Daredevil and Luke Cage and Jessica Jones. The quality of those shows have drawn someone of her caliber, which is very exciting for us. I can't wait to read it and have a scene with her. It’s one of the experiences I’ll probably remember for the rest of my career.

Cox will be in attendance at the ACCC Saturday, Oct. 29 and Sunday, Oct. 30. ACCC officially starts Friday, Oct. 28.