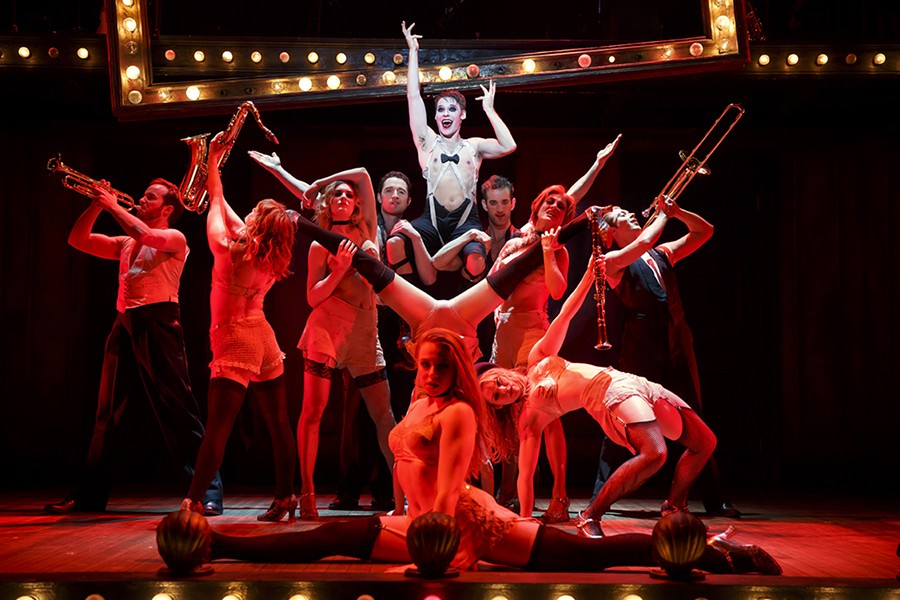 Reviewing the last touring musical in San Antonio, I lamented that it was pointless for producers to assign a first-rate director like Jack O’Brien to second-rate art like The Sound of Music (and you are welcome to check out my kvetching here). By contrast, the current touring production of Cabaret is exactly the sort of challenging, first-rate show that benefits from equally top-notch direction. Sam Mendes’ famous mounting, now nearing its 20th anniversary, is a master class in staging — we should all be very glad it has made it to San Antonio.

Mendes’ production works so well because every moment arcs toward the best three minutes of musical theater in recent memory, in which the seductive façade of a cabaret — all glitter and artifice, all brittleness and bite — suddenly and literally vanishes, revealing nothing, or, rather, revealing a nothingness conjoined to its less abstract counterpart: death. And while the Holocaust is here indeed represented by symbols — the pink triangles and yellow stars worn by political prisoners, for instance — a darker, more architectural symbol is that of the empty stage itself, as the menace of a Nazi-fied Germany spreads over the stage of Europe. As a director, Mendes thus works ‘backwards’ from this powerfully conceived ending as he crafts a gender-(b)ending Emcee who appropriately and chillingly represents nothing at all: a nihilistic black hole of ideology, who serves only to leer, to scorn, to mock. No sincerity is left unscathed, no honesty permitted to take root. The Emcee’s only soft spot, it seems, is the pursuit of ephemeral pleasure — and the more transgressive, the better. John Kander and Fred Ebb’s terrific score only emphasizes the terrible joy of dancing until we drop. 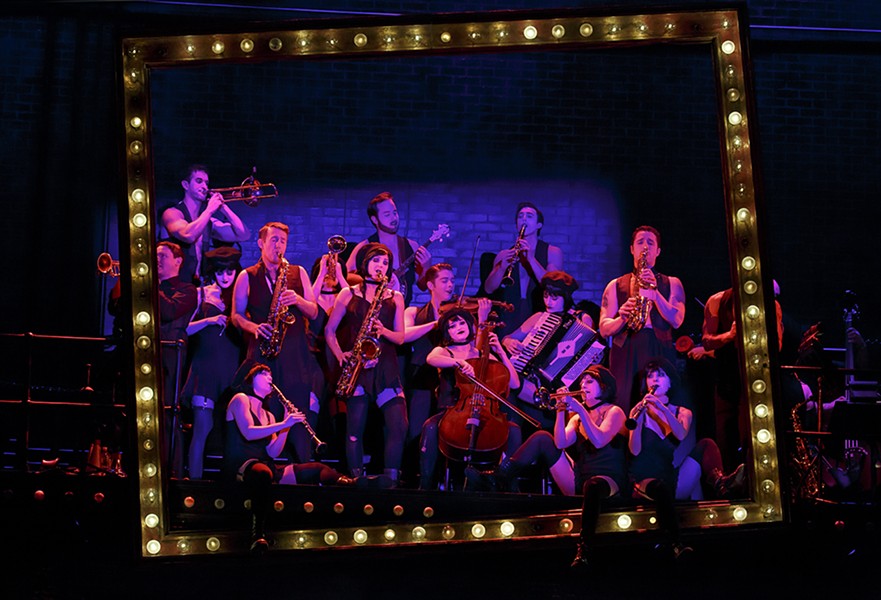 When not performing some delightfully perverse choreography — including the all-too-rare representation of fellatio at the Majestic — the Emcee has much to leer at. Cabaret’s plot, drawn ultimately from the memoirs of Christopher Isherwood, recounts the story of a naïve, itinerant American named Cliff who crosses paths with Berlin’s third-rate cabaret singer Sally Bowles (immortalized by Liza Minnelli in the film version, and here convincingly played as a drug-addled waif by Andrea Goss). Struggling to make ends meet, Cliff (Benjamin Eakeley) makes runs to Paris as a courier for Ernst Ludwig, whose shadowy political sympathies drive the engine of the plot (and history). Indeed, the encroaching threat of Nazi-ism jeopardizes the courtship of landlady Fräulein Schneider and her Jewish suitor, Herr Shultz, whose fruity, sentimental romance (“It Couldn’t Please Me More”) attracts the bricks of anti-Semites. And as Cliff negotiates the boundaries of his own sexuality — a certain Bobby comes a-callin’ even as Cliff shacks up with Sally — the personal lives of all the characters are dwarfed by the de-personalizing call-to-arms of rampant jingoism (“Tomorrow Belongs to Me”).

This touring production — a revival of Mendes’ groundbreaking production of 1998 — is very strong, though my companion thought it was perhaps a bit too polished: that it missed a certain raw, demonic energy to be found in the show’s first run. As the Emcee, Randy Harrison (TV’s Queer as Folk) is terrific: he turns his innocent, boyish looks to good advantage as he seduces the audience into a sense of complacency and, increasingly, into a blinkered fatalism (“I Don’t Care Much”). Mary Gordon Murray and Scott Robertson — as Schneider and Shultz — effectively capture the tribulations of true romance in a time of equally true hate, while Rob Marshall’s sleazy, sex-soaked choreography for the Kit Kat Klub ironically emphasizes the sheer goodness of this senior couple. William Ivey Long’s uncharacteristically ratty costumes channel Bertolt Brecht and sluttiness in equal measure. (We approve, as do nasty women everywhere.) 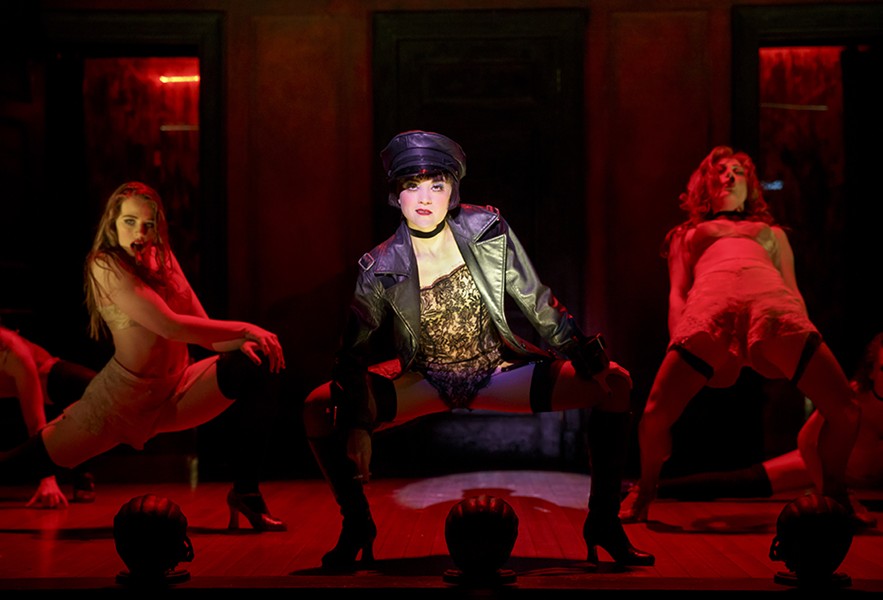 If you’re a serious student of drama, and you’ve never seen this Sam Mendes production, you absolutely need to go: it’s a model of direction. Every decision made in staging and design has been calculated to provide the biggest interpretative impact at the end of the show, and that, my friends, is the greatest compliment I can pay to a director of anything. This staging, like “life” itself, is beautiful. Go see it.