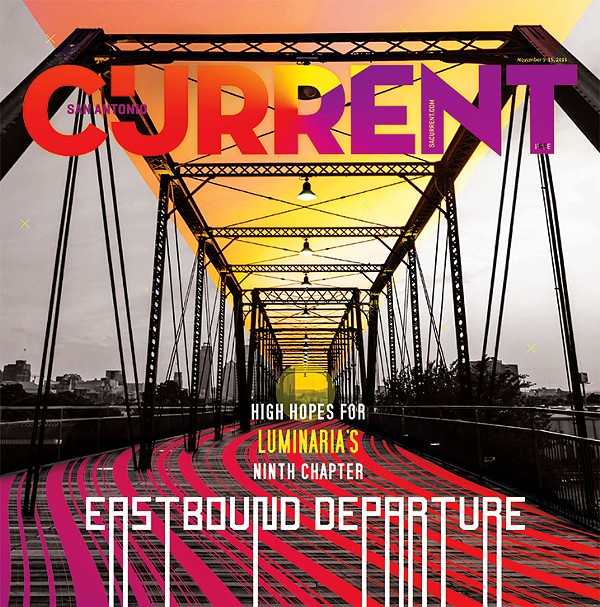 If you’re only as good as your last performance, one might argue that Luminaria has a lot to prove this year. Although it promised all the makings of an exciting new chapter staged in a footprint anchored by the San Antonio Museum of Art, the multidisciplinary arts festival’s 2015 programming suffered greatly from severe weather tied to Hurricane Patricia. While flash flooding resulted in the cancelation of multiple outdoor components, SAMA sheltered from the storm and buzzed with a nervous energy as damp festival-goers crowded into memorable — if slightly steamy — presentations by the likes of Chicano performance artist/activist Guillermo Gómez-Peña and avant-garde composer William Basinski. Down the street, scattered showers and gusts of wind only amplified the cinematic drama of San Antonio-born chanteuse and David Lynch collaborator Chrysta Bell’s first-ever local concert. In a nutshell, mother nature may have (once again) cast a wet blanket over Luminaria, but many who braved the elements experienced something strange, beautiful and unpredictable. In an effort to reclaim some of what was washed away, a series of rescheduled and reconfigured Luminaria “Take Two” events kicked off in a vacant lot in November (with the Chris Sauter/Buttercup collaboration Plato’s Drums) and wrapped in late February with an evening of indoor/outdoor performances at the Tobin Center for the Performing Arts.

Devised by former San Antonio Mayor Phil Hardberger in the multidisciplinary vein of illuminated nighttime arts festivals like Paris, France’s citywide Nuit Blanche, Luminaria has evolved, morphed and bounced around downtown since its inception in 2008. Along the way, the festival has collected fans and critics in somewhat equal measure. Those who were “there” from the get-go often mention the odd dichotomy of seeing contemporary art surrounding Alamo Plaza (2008-2010) or installations popping up in Peacock Alley. Some found the Hemisfair years (2011-2013) lacking in local representation while others enjoyed investigating exhibits and performances in and around the historic structures that dot the park. As for its outing in River North (2014), the largely commercial footprint (connecting Central Library, the Southwest School of Art, the Tobin Center and parts of the River Walk) confused some but inspired others to wander and find hidden gems that blurred artistic boundaries — namely artist and filmmaker Kevin Cacy’s tricked-out vintage pinball parlor staged in an unmarked warehouse and a conceptual takeover of the delightfully divey My Brother’s Bar.

Although governed by a board that’s worked with an array of artistic directors and producers over the years, Luminaria didn’t have an executive director until Kathy Armstrong was appointed in 2015. Formerly director of exhibitions at the Southwest School of Art, Armstrong helped curate Luminaria in 2011 and served as associate artistic director in 2013. As part of her development plan, Armstrong reinstated an open call for artists and implemented a six-member Artistic Advisory Committee. In a 2015 interview with the Current, Armstrong described the open call as both “a reminder of the wealth of talent in our community” and “a great opportunity for artists who are under the radar.”
Beyond weighing in on hundreds of artist-submitted project proposals, each year’s Artistic Adviso

Fittingly, a number of projects drew creative inspiration from the area itself. “There were quite a few proposals thinking strategically about this neighborhood, about people’s sense of its history, people’s sense of its identity,” Armstrong told us. In addition to projects by artists Kaldric Dow and Arlene Mejorado (both of which are covered in the pages that follow), Annele Spector and Kitty Williams’ collaborative performance Classics Lounge and the Griot Grille is billed as a storytelling soul kitchen in the heart of the Eastside. “They have been researching the history of juke joints and the music tradition in this neighborhood,” Armstrong said. “Their theater performance will be essentially recreating that juke joint but with lots of flavor about what used to happen here.”

Unsurprisingly, the activation of the Hays Street Bridge — which plays host to performances, light installations and poetry readings on Thursday night — tops the “must-see” list of many involved in this year’s Luminaria. While Armstrong’s equally excited to see that transformation unfold, she seems most proud of the 2016 festival’s potential to live on through “legacy” projects — namely the permanent murals created by Iker Muro (Spain), Daniel Eime (Portugal) and Los Dos (El Paso) in collaboration with Public Art San Antonio — and forge new bonds between visitors and the Eastside’s cultural landmarks.

Transportation
Attendees are encouraged to take advantage of free public parking at the Alamodome (Lot C) and underneath I-37 at Austin St.; VIA’s special Luminaria bus route; and onsite bike valet services courtesy of Pop Up Pedal.