In a 2009 article titled “Then as Now, the Terrors of the Routine,” The New York Times drew an unlikely parallel between Orson Welles and Chantal Akerman as both were just 25 when they directed masterpieces that cast long shadows over their careers. While Akerman’s slow-moving opus Jeanne Dielman, 23, quai du Commerce, 1080 Bruxelles (1975) is unlikely to pop up on quite as many “Greatest Films of All Time” lists as Welles’ iconic powerhouse Citizen Kane (1941), it’s epic in its own peculiar way and visibly influenced many of today’s most revered arthouse directors. Frequently described as “deadpan,” the three-hour-and-15-minute film stars French actress Delphine Seyrig as an obsessive-compulsive woman who lives alone with her son and meticulously balances her time between domestic rituals (shopping, cooking and cleaning with bizarre intensity) and prostitution. Taking the cinematic concept of “real time” to a level all its own, Jeanne Dielman invites viewers’ eyes to wander and investigate the space around the titular protagonist (as she kneads meatloaf, brews coffee, washes dishes), building tension from monotony and delivering an ending that’s nothing short of shocking. The McNay screens the enigmatic gem (in French with English subtitles) in conjunction with its Get Reel Film Series. Free, wine reception at 5:30pm, film at 6pm Thu, McNay Art Museum, 6000 N. New Braunfels Ave., (210) 824-5368, mcnayart.org. — Bryan Rindfuss

As a best-selling author, philanthropist, actress on the legendary ’80s TV show Dallas and a correspondent on Entertainment Tonight, Priscilla Presley has more than carved her own space in the cultural landscape. But when someone was so close to an unquestionable icon, one whose legend only seemed to grow as they passed into the realm of modern mythology, people will always want to know the juicy details. Since this evening with Presley is billed as an intimate interview with the audience, you’d be crazy not to think many of the questions asked will concern Presley’s time spent alongside the Leslie Nielsen during the making of all three Naked Gun movies. She might also even mention her ex-husband, who began dating her when she was 14 years old and he was serving in the Army. Eventually she moved to America to finish high school, living in his Memphis mansion while he acted in Hollywood, which sounds like a fairytale written by William Faulkner. It’s our understanding this guy was a singer of some kind. $65-$259, 7:30pm Thu, Tobin Center for the Performing Arts, 100 Auditorium Circle, (210) 223-8624, tobincenter.org.
— Jeremy Martin

A man of many wild, weird and wonderful hats, Agosto Cuellar has won over fans as a fashion designer, the producer/curator behind the Una Noche en la Gloria fan favorite Runway en la Calle, a refreshingly fun DJ, a regional visual merchandiser for Goodwill Industries and proprietor of Jive Refried — a bygone emporium he’s described as “a labor of love that encompassed everything I found beautiful: contemporary art, vintage clothing, DIY creations, curios and home décor.” A Southtown fixture from 1999 to 2011, the shop was an art installation in its own right — showcasing Cuellar’s rasquache design aesthetic as well as his talent for scavenging unusual treasures and artfully repurposing everyday items. Aiming to recreate some of the strange magic of Jive Refried, Cuellar’s new exhibition “Jive Town” takes shape in a six-week installation organized by Alejandro Diaz, the San Antonio-born, New York-based founder of Sala Diaz. Himself a fan of rasquache sensibilities, Diaz is the artist responsible for the plants potted in supersized, handpainted La Morena, Herdez and Jumex cans permanently installed at the San Antonio Airport and is represented in permanent collections ranging from the Smithsonian Museum of American Art to El Museo del Barrio. Essentially co-curated by Cuellar and Diaz, the gallery’s transformation into a “functioning boutique” also includes an array of related programming, including screenings of a web-based series conceived by Kimberly Suta, sewing circles, window displays and swap meets. Free, opening reception 6pm-midnight Fri, special hours noon-7pm Dec. 17-23, on view 3-7pm Thu-Sat though Jan. 31, Sala Diaz, 517 Stieren St., (972) 900-0047, saladiazart.org. — BR

With a little help from their friends at the righteous Surdna Foundation — an organization that helps support and build thriving cultural communities across the U.S. — the folks at Guadalupe Cultural Arts Center have, for three years running, hosted an excellent fellowship program called Artist Lab. Aimed at fostering connections between artists, as well as between artists and communities, the program gives a select group of artists the opportunity to develop their creative and business skills, and, at the end of the fellowship, to exhibit their work. This year’s Artist Lab exhibit, which opens Friday and runs through February 3, boasts a stacked roster of estimable local talent. The artists, which, taken all together, comprise a diverse set of concerns, identities, techniques and aesthetic visions, are Lisette Chavez, Raul Gonzalez, Sarah Fox, Jose Villalobos, Andrei Renteria and Kristel Puente. If you’ve ever wanted to see what it looks like when artists are given the time, space, resources and encouragement to fully engage their craft, here’s your chance. Free, 6-9pm Fri, Galería Guadalupe, 723 S. Brazos St., (210) 271-3151, guadalupeculturalarts.org. — James Courtney

Rooted in the ’70s punk scene, Alejandro Escovedo has been writing and playing music longer than most of these entitled indie rock cry babies have been alive, and on his latest effort, Burn Something Beautiful, you can certainly hear decades of blood, sweat, tears and emotions pouring over the tracklist. On “Johnny Volume” in particular, Escovedo sings, “Some people think I’m ugly, some people think I’m dead” as creeping, echoey guitar chords roll underneath his vocals, dragging the listener through a warm field of nostalgic euphoria. Inspiringly unabashed, Escovedo is sure to deliver a night of raw songwriting and genuine musicianship. $20-$90, 9pm Fri, Sam’s Burger Joint, 330 E. Grayson St., (210) 223-2830, samsburgerjoint.com.
— Chris Conde 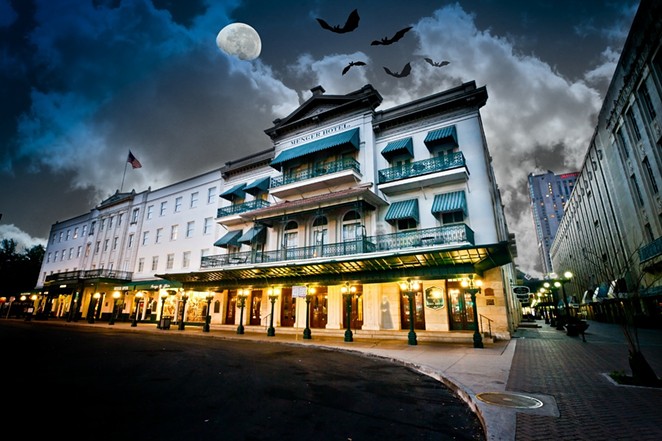 Revisit the somewhat-lost tradition of scary ghost stories at Christmastime on the Sisters Grimm “Ghosts of Christmas Past” tour at the Menger Hotel. Known as the “most haunted hotel” in all of Texas, there have been countless ghost and spirit sightings in this historic haunt. From Sallie White, whose husband is said to have shot her on suspicion of infidelity, to Capt. Richard King, the eternal guest who died in the King Suite, you’ll hear creepy and unexplainable tales from the theatrical Sisters Grimm tour guides. In full character and costume, their performances might just awaken your senses to the other side so you can have a spirit sighting of your own. You’ll also view some of the beautiful Christmas decorations and historic suites in the Menger — rooms you might not get to see unless you book a hotel stay with your tour as part of the Sisters Grimm package. So celebrate the most wonderful time of the year with, as the song says, “scary ghost stories and tales of the glories of Christmases long long ago.” And don’t forget to take pictures you can analyze later, looking for unexplained shadows and ghostly ghouls. $15-$25 in advance, 6:40pm & 7pm Fri, 7:20pm, 7:40pm & 8pm Sat, Menger Hotel, 204 Alamo Plaza, (210) 638-1338, sistersgrimmghosttour.com.
— Rachel Cooley

Dating back to the Spanish Colonial era, the “shepherds’ play” Los Pastores was originally developed by Franciscan friars as a means of teaching the nativity story to indigenous people. Presented by Mission San José Parish and underwritten through funds raised as part of the 2016 World Heritage Festival, this 69th annual presentation of the age-old holiday favorite plays out on the grounds of Mission San Jose and features the Guadalupe Players staging a script from the 1930s. Told from the shepherds’ point of view, the play depicts their journey to Bethlehem and the battles between good and evil, both internally and externally. Guests are encouraged to warm warm clothing and bring blankets and lawn chairs. Hot chocolate and pan dulce will be available for purchase from the parish. Free, 7-9pm Sat, Mission San Jose, 701 E. Pyron Ave., (210) 207-8612, sanantonio.gov. — BR

According to americanamusic.org, Americana is “contemporary music that incorporates elements of various American roots music styles, including country, roots-rock, folk, bluegrass, R&B and blues, resulting in a distinctive roots-oriented sound that lives in a world apart from the pure forms of the genres upon which it may draw." Robert Earl Keen’s extensive ten-album catalog is a direct reflection of the genre. With a small stint in Nashville after building some momentum with shows at Gruene Hall and the Cactus Cafe in the early 1980s, Keen eventually moved back to Texas where he ultimately found mainstream success. $37.50-$75, 8pm Sat, Aztec Theater, 104 N. St. Mary’s St., (210) 812-4355, theaztectheatre.com. — Chris Conde

What if you’d never existed? That’s the question explored by George Bailey (James Stewart) when his wish is granted by a guardian angel in Frank Capra’s classic film It’s a Wonderful Life. It owes something to A Christmas Carol in affirming an individual’s power to make a difference for good or ill. And what if this movie had never existed? Then it wouldn’t be shown every Christmas or be one of Hollywood’s most beloved tearjerkers. It wasn’t quite a failure in 1946 — it earned five Oscar nominations — but like the discouraged George, it took a while to understand how many people loved it and how much poorer their lives would be if they’d missed it. Hemisfair and Slab Cinema close out the 2016 edition of Southtown Cinema with a free outdoor screening of the holiday favorite. Free, 6pm Sat, Hemisfair Park, 434 S. Alamo St., (210) 212-9373, slabcinema.com. — Michael Barrett

The Spurs will retire their eighth jersey number in franchise history on Sunday night, honoring Timothy Theodore Duncan — the basketball icon who transformed San Antonio into title town. Since Duncan’s retirement was announced this summer, via a press release followed by a heartfelt letter, Spurs faithfuls have been anxiously awaiting a proper sendoff for the greatest player to ever don the silver and black. As the franchise leader in games played, points scored, rebounds, blocks, double-doubles and field goals made, Duncan’s impact on the Spurs goes beyond the numbers. His drive and determination set the tone for a winning culture that still thrives, despite his absence. When Duncan’s #21 is raised to the AT&T Center rafters, there won’t be a dry eye in the house. $120-$7,895, 6pm Sun, AT&T Center, One AT&T Center Pkwy., (210) 444-5000, attcenter.com. — M. Solis