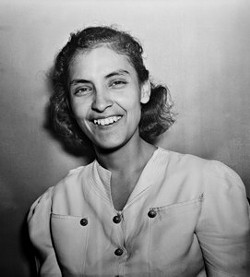 In celebration of Emma Tenayuca's 100th Birthday, the Guadalupe Cultural Arts Center will host an event with several community partners on Dec. 21.

Tenayuca was first arrested at age 16, when she joined a picket line of Finck Cigar Company workers who were on strike. Five years later, two more arrests would be added to her record, one for disturbing the peace during a nonviolent protest and the other for her role as leader during the historic 1938 Pecan Shellers Strike, where she would earn the nickname "La Pasionaria,” the Passionate One.

At 21, Tenayuca would already be considered the most effective organizer for the National Worker's Alliance when she chosen to lead more than 12,000 San Antonians, a significant number being Mexican-American women, through a protest for fair pay. A year later, when she was scheduled to speak at the San Antonio Municipal Auditorium, Tenayuca would be met with thousands of angry protestors for her role as Texas Chair of the Communist Party. Despite Mayor Maury Maverick defending Tenayuca's right to free speech, riot erupted and death threats were sent to Tenayuca, forcing her to flee the city and move to San Fransisco.

By the time she retired from teaching in the Harlandale School District in 1982, Tenayuca had earned a degree from San Francisco State College, a master's degree from our Lady of the Lake University and had made education her priority. For her first-hand experience protesting for minority rights and her tenacious fight for civil liberties, Tenayuca is regarded as a monumental figure and great labor organizer, and in recognition of her birthday, the Guadalupe Cultural Arts Center celebrate with several community partners.

The evening's event will include a preview segment of a new version of the children's play about Tenayuca, a short films screening, a reading and a birthday piñata. The Guadalupe also dedicates its Holiday Posada to Tenayuca and all ages are invited. 6-8:30 p.m. Wed. Dec. 21st, The Guadalupe Cultural Arts Center, 1301 Guadalupe St., guadalupeculturalarts.org.