An Iconic Couple Through the Lens in ‘Diego y Frida: A Smile in the Middle of the Way’

Guillermo Kahlo lamented “an elephant married a dove” after the 1929 wedding of his 20-something daughter, Frida, to the famous Mexican artist and womanizer Diego Rivera, almost twice her age. But he also warned the groom that she was “un demonio,” a devil. “Tempestuous” is a barely adequate description of their rocky relationship marked by separations, divorce, remarriage and a celebrity life in the world’s spotlight long before reality TV.
Rivera had many affairs, including Frida’s younger sister and Hollywood star Paulette Goddard, while she responded with affairs of her own, including the Communist leader Leon Trotsky and numerous women. To a friend, Frida admitted, “I have suffered two serious accidents in my life, one in which a streetcar ran over me … The other accident is Diego.” 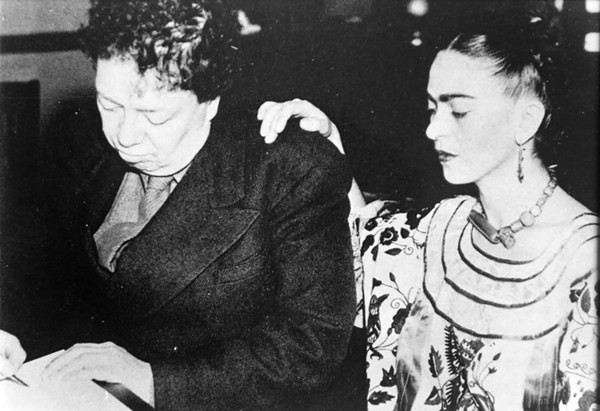 Icons, legends and role models for generations of politically active artists,
“Diego y Frida: A Smile in the Middle of the Way” spans the lives of Mexico’s best-known aesthetic provocateurs through the eyes of family, friends, admirers and photojournalists. The nearly 100 black-and-white photographs are on view through January 29 at the Mexican Cultural Institute in Hemisfair.

A German Jew of Hungarian descent, Frida’s father, a professional photographer, married a part-Indian and devout-Catholic Mexican woman. He took Frida’s portrait as a young girl in a frilly dress. Shortly before her birth in Coyoacán outside Mexico City, he built the family home, Casa Azul, which serves as the backdrop for many of the photographs. It’s now the Museo Casa Estudio Diego Rivera y Frida Kahlo, where this exhibit originated in 2002.

Her right leg shriveled by polio when she was six, Frida was in a bus/streetcar accident when she was 18 that caused her pain for the rest of her life. The nationalism of the Mexican Revolution inspired her to wear native Mexican costumes, but even after it became unfashionable, she continued to wear the long, flowing dresses to hide her thin leg and orthopedic shoe. Beginning with their wedding day portrait by Ernesto Reyes, the press obviously loved the dramatic image she created — a dark, slender beauty in exotic Mexican dresses and elaborate jewelry standing next to her towering husband in rumpled suit and broad-brimmed hat.

In photos from the early 1920s taken by Enrique Díaz and Augustín Victor Casaola, the couple leads protest marches on behalf of the Union of Revolutionary Sculptors, Painters and Engravers. And in her last public appearance on July 2, 1954, a pale, sickly Frida participated in a rally protesting the United States’ intervention in the overthrow of Guatemala’s leftist president. Beside the Mexican artist Juan O’Gorman, Frida sits in her wheelchair and holds a placard declaring, “Por la paz,” for peace. 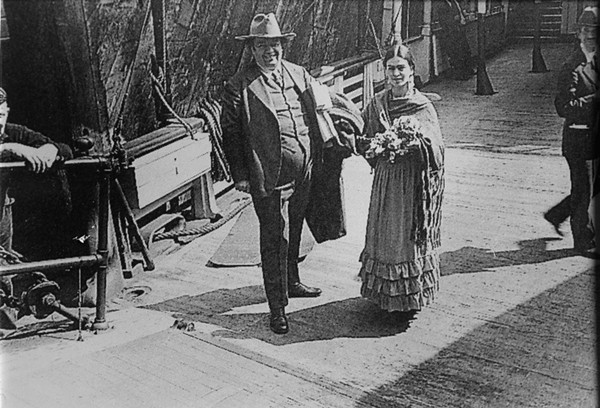 On her first trip out of Mexico in 1930, Frida accompanied Diego to San Francisco, where he was commissioned to paint two murals at the Pacific Stock Exchange Luncheon Club and the California School of Fine Arts (now the San Francisco Art Institute). Edward Weston and Ansel Adams were among the famous American photographers enraptured by the famous couple. There’s also a shot of the pair taken two days after Diego’s mural for the Rockefeller Center in New York was yanked because it included a portrait of Lenin.

The most beautiful portraits of Frida were taken by one of her lovers, Nickolas Muray, a well-known Hungarian photographer. After breaking off their affair, he wrote, “Of the three of us there was only two of you. I always felt that. Your tears told me that when you heard his voice. The one of me is eternally grateful for the happiness that the half of you so generously gave.”