San Antonio hosts three large marches each year. The Martin Luther King Jr. March, International Women’s Day March, and the César Chávez March, all aimed at promoting social justice and fostering community, are major events for our city and important catalysts for discourse. Hosted by the City of San Antonio’s Department of Arts and Culture and curated in part by Sarah Castillo of Lady Base Gallery, the new exhibit “United We Are One” presents a thoughtful look at our tradition of marching together for causes that matter to us. Featuring “works by local artists that showcase our success on the road towards equality and recognize the challenges we’ve faced and must continue to overcome,” the special exhibit remains on view through March 31, following Thursday night’s opening reception. Free, 6-9pm Thu, Plaza de Armas Gallery, 115 Plaza de Armas #102, (210) 206-2787, getcreativesanantonio.com.
— James Courtney

You know you’re struggling for NBA relevance when the most memorable part of your season thus far is the controversy generated from the release of a disgruntled former coach’s book, as is the case with the lowly Denver Nuggets. The Spurs are no strangers to flying under the radar, but remain on the opposite end of the spectrum when it comes to success on the court. San Antonio’s recent stretch of wins has showcased the most efficient offense and defense in the league, outscoring opponents by almost 23 points. Five-time All-Star LaMarcus Aldridge has picked up the slack on the offensive end of the floor, as role players like Davis Bertans and Jonathon Simmons continue to make contributions off the bench. Expect a frantic pace from the Nuggets, as they attempt to counter their current slide. $10-$275, 7:30pm Thu, AT&T Center, One AT&T Center Pkwy., (210) 444-5000, attcenter.com.
— M. Solis

Let’s get some shit straight about Neil deGrasse Tyson, lest his playfulness and willingness to engage the general public on issues not limited to his scientific specialties lead anyone to forget his position as one of the finest minds of our time. Tyson, who will present a talk entitled “The Cosmic Perspective” at Tobin this week, has a PhD in astrophysics from Columbia University, has advised congress on issues related to space exploration, continues to be a prolific author (both in his profession and for the public), heads up the world-renowned Hayden Planetarium in New York City, and works as a research associate in the Department of Astrophysics at the American Museum of Natural History. And, really, that’s a severely abridged version of his impressive resume. With “The Cosmic Perspective,” as the title suggests, Tyson looks to reframe our thinking about a whole host of issues by reminding us of our insignificance in the face of an endless and empty universe. The purpose of this, of course, is manifold, but it includes the hope of changing our perspectives on materialism, capitalism, government, religion, and, most importantly, how we view ourselves and each other. Sold out ($350-$750 at stubhub.com), 7:30pm Thu, Tobin Center for the Performing Arts, 100 Auditorium Circle, (210) 223-8624, tobincenter.org. — JC

Evidenced by the success of the Pitch Perfect movie franchise, the new Broadway musical In Transit, Texan pop quintet Pentatonix and reality competition shows like The Sing-Off and Pitch Slapped, a cappella is back with a vengeance. Few organizations are prouder of this resurgence than the Barbershop Harmony Society, a Nashville-based troupe boasting more than 23,000 members that range in age from 8 to 100. Formed in 1938 (as the Society for the Preservation and Encouragement of Barber Shop Quartet Singing in America) and now billed as “the world’s largest all-male singing society,” BHS is set to invade downtown San Antonio for its annual Midwinter Convention. Extending its scope by bringing women’s choruses and male/female ensembles into the fold, the program kicks into full swing Thursday afternoon with a keynote address from Deke Sharon (aka “The Godfather of Modern A Cappella”), a vocalist, arranger, composer and producer with a knack for simulating the sounds of musical instruments with his voice. Beyond classes, meetings and rehearsals, the five-day affair includes a number of public events hosted at the Lila Cockrell Theatre (610 E. Market St.), including a Thursday Night Show uniting the groups AISQC, Boardwalk, Pratt Street Power, The Buzz, Main Street, Signature, Four Voices, Forefront, Keepsake and The Children’s Chorus of San Antonio ($65, 7:30-10pm Thu); Friday’s Youth & Seniors Chorus Festival showcasing 25 ensembles from across the country ($50, 11am-10pm Fri); an International Seniors Quartet Championship between Social Insecurity, Armchair Chorderbacks, Velvet Frogs, Leftover Parts, Time Bandits and 20 other groups ($50, noon-5pm Sat); and — likely the most anticipated of them all — a Saturday Night Show boasting a “world-class entertainment lineup” combining award-winning acts, international youth choruses and MacArthur High School’s own a cappella group PFC ($65, 7:30-10pm Sat). Further proof that this classic American tradition is hitting a high note — all of Midwinter’s ticketed events are on the verge of selling out. For details and tickets, visit barbershop.org/sanantonio. — BR 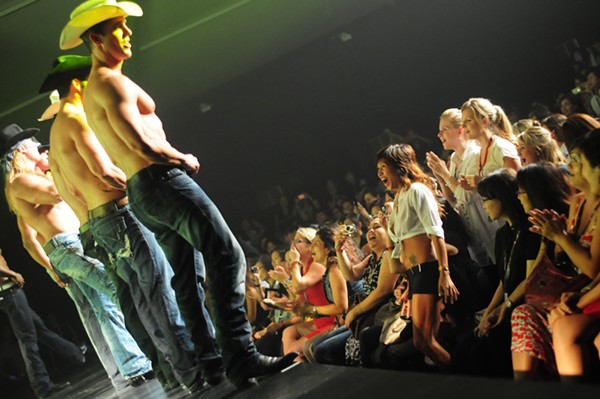 Credited with helping “legitimize stripping as a form of popular entertainment,” the dancing beefcakes of Chippendales were initially devised to reinvigorate a failing Los Angeles nightclub back in 1979. Now a full-fledged institution clad in little more than signature bowties and detached shirt cuffs, the unapologetically cheesy operation delivers an abundance of bachelorette and girls’ night packages (pun intended) and boasts a popular Las Vegas residency starring “the most doable men in show business” and a touring troupe that sows its wild oats all over the globe. An early stop on this year’s “Best. Night. Ever.” tour, San Antonio welcomes the scantily clad studs for an evening billed as a “whirlwind of sexy goodness” that’s “perfect for when you want to party locally or plan an exotic rendezvous for you and your troupe of besties.” $10-$35, 9pm Sat, Aztec Theatre, 104 N. St. Mary’s St., (210) 812-4355, theaztectheatre.com. — BR

A veteran of the early ’80s East Village art scene, vocalist, filmmaker, actress, curator and performance artist Kembra Pfahler has, over the years, expounded upon a singularly disturbing will to provoke. Perhaps best known as the frontwoman of the punk/metal troupe The Voluptuous Horror of Karen Black (VHOKB), her aggressive, animalistic personas challenge notions of purity and innocence as intrinsic qualities of the female beauty ideal. At Sala Diaz, Pfahler will be creating live body paintings — “Butt Prints,” to be precise —which will be passed out to the audience. In all, it seems the perfect pill for your day after/post-protest march/existential hangover. Free, 9pm Sat, Sala Diaz, (972) 900-0047, saladiazart.org.

In Ego Trip Vol. 1, Issue 3, a New York based hip-hop magazine, the Notorious B.I.G. was quoted as saying, “I thought I was the illest,” referencing R.A. The Rugged Man, aka Richard Andrew Thorburn. Despite having worked with the Erick Sermon, Wu-Tang Clan and the late Biggie Smalls, Thorburn never seemed to break through the underground like his early ’90s counterparts. Only until 2013 with the release of his second album Legends Never Die (his first album being released 10 years prior) did Thorburn start to see commercial success with the album landing at number 17 on the Billboard Top R&B and Hip Hop Albums chart. $10-$18, 7pm-2am Sat, Fitzgeralds Bar and Live Music, 437 McCarty, Suite 101, (210) 629-5141, fitzrocks.com.
— Chris Conde

San Antonio is gay AF. If you don’t believe it, maybe it’s high time you peep a Wayne Holtz or House of Kenzo show. Oh look, here’s one for you. Wayne Holtz is San Antonio’s Neo from The Matrix, exposing us to realities and truths we may not be ready to understand with his elaborate choreography, baritone crooning and poppy instrumentation. House of Kenzo are aliens from another planet death-dropping through portals from the future and vogueing the audience — and whatever venue they’re playing — into a live performance art piece. Free, 9pm Sat, La Botánica, 2911 N. St. Mary’s St., (210) 716-0702, facebook.com. — CC

Sunday! Sunday! Sunday! (Or, sure, Saturday also, but how often do you get to do the monster-truck-guy voice about an actual monster truck show happening on a “Sunday! Sunday! Sunday!”?) Witness some of the biggest damn trucks you ever saw in your life aggressively fighting for dominance like skunk apes in heat. Then after you’ve found a spot in the parking lot, head inside the Alamodome and watch 10,000 pound leviathans with names like El Toro Loco, War Wizard, and freaking Grave Digger give the owners of the jacked-up crew cabs outside brand new inferiority complexes, wreaking methanol-fueled havoc in races and audience-judged stunt competitions that are sure to produce veritable buttloads of both sound and fury. Might as well name one of those trucks “Little Pink Houses” because, as John Cougar Mellencamp sings, “ain’t that America?” $15-$105, 7pm Sat, 2pm Sun, Alamodome, 100 Montana Street, (210) 207-3663, alamodome.com. – JM