Since celebrating its 21st birthday and bringing art-world veteran Veronique Le Melle on board as executive director in 2016, Artpace has stayed true to late founder Linda Pace’s vision — welcoming three geographically diverse trios of resident artists and hosting three independent exhibitions each year — while implementing thoughtful tweaks to process and presentation. In a twist possibly only art nerds might notice, the revered San Antonio institution is once again inviting the curator of its forthcoming International Artist-in-Residence cycle to also select the artists for an exhibition in the Hudson Showroom. Herself a multifaceted artist with an extensive exhibition history, Wisconsin-born Michelle Grabner steps in as curator of the curiously titled “Did You Ever See Such a Thing as a Drawing of a Muchness?” — a group show gathering works by Natasha Bowdoin (Houston), Harold Mendez (Chicago) and Rodrigo Valenzuela (Los Angeles), all of whom were living in Texas when they applied to Artpace’s statewide open call. Running concurrently, Benjamin McVey’s “Open” involves the San Antonio artist relocating his painting studio into Artpace’s newly rebranded Main Space, formerly known as the Window Works Gallery. Free, 6-8pm Thu, Artpace, 445 N. Main Ave., (210) 212- 4900, artpace.org. — Bryan Rindfuss

“On the Curve,” a show that focuses on the multitude of possibilities within the realm of curvilinear artwork, is the latest from Olmos Park’s Ruiz-Healy Art. The group exhibit, which runs through February 25, features the work of artists Constance Lowe, Jesse Amado, Andrés Ferrandis, Nicolás Leiva, Nate Cassie, Laura Anderson Barbata, Ricky Armendariz and Ethel Shipton. While the curvilinear aspects are clearly evident in the clean lines and precise curves, each artist offers their own unique perspective, concerns, personality and process in the pieces. The resulting whole presents a compelling argument that within even the most rigid forms, endless permutations and explorations are possible based on an artist’s particular pursuit/approach. As the exhibit announcement explains, these artists “delve into curvilinear shapes and forms with a bold intellectual and playful practice using art history as an impetus.” Free, 11am-4pm Thu-Sat, Ruiz-Healy Art, 201-A E. Olmos Drive, (210) 804-2219, ruizhealyart.com. — James Courtney

As is tradition to kick off the San Antonio Stock Show and Rodeo, The Cowboy Breakfast will serve free breakfast tacos to up to 40,000 people in the parking lot of Cowboys Dancehall. Including live country music, gun slingers and mechanical bull, the event raises money for a scholarship fund for the St. Philip's College Culinary and Tourist Department. Take a bite out of 12,000 Kiolbassa chorizo and egg tacos, 10,000 tamales and 8,000 biscuits with sausage. Free, 4:30-8:30am Fri, Cowboys Dancehall, 3030 NE Loop 410, (210) 646-9378, thecowboybreakfast.com.
Fri 1/27 - Sat 1/28
Dr. Jekyll and Mr. Hyde

Here’s a swell treat for fans of old horror movies, gothic literature and spooky/ambient soundtracks alike. This unique event, hosted by the hardworking folks at URBAN-15, will present a silent showing of the 1920 movie Dr. Jekyll and Mr. Hyde (starring John Barrymore), which is based on Robert Louis Stevenson’s 1886 novel, accompanied by a live score/soundtrack performed by ATX band Invincible Czars. Last year, Invincible Czars gave another horror classic, Nosferatu, a similar treatment, with stunning and widely lauded results. For this performance, the soundtrack work by Invincible Czars promises to be minimal and creepy, and includes audience participation as well as a few reworked pieces that originally appeared in the film. $10-$15, 9pm, URBAN-15 Studio, 2500 S. Presa St., (210) 736-1500, urban15.org.
— JC 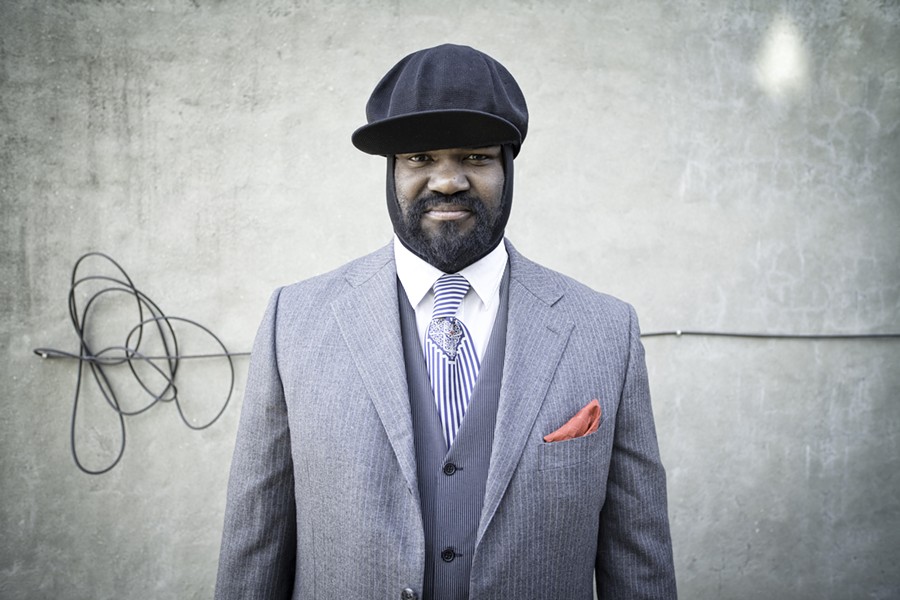 Consider this one of San Antonio’s concerts you should not miss this year. The amazing gospel singer, with a voice that could melt the iciest hearts, is backed by some damn good gospel and jazz instrumentation, his lyrics floating perfectly through the songs. Porter’s performances are a perfect example of what legendary singing should look like (from someone awarded a Grammy for best jazz vocal album, no less). Don’t miss this chance to catch someone who is truly one of the best vocalists of our time. 8pm Fri, $35, Carver Community Cultural Center, 226 N. Hackberry, (210) 207-2234, www.thecarver.org.
– Chris Conde

The international gaming convention PAX (short for Penny Arcade Expo), returns to San Antonio for its third annual event as tens of thousands of Texas gamers (and those from galaxies far away) convene to participate in three full days of video game panels, tournaments, concerts, special guest appearances and an expo featuring gaming companies showing off their latest products. PAX, which also holds conventions in Seattle (PAX Prime and PAX Dev), Boston (PAX East) and Melbourne (PAX Aus), debuted PAX South in San Antonio in 2015 and broke the attendance record for a first-year PAX con. Numbers are anticipated to rise even higher this year as PAX South continues to build on its popularity and the fact that it caters to video game enthusiasts of all sorts — from those who like MMORPGs to vintage Atari games to dice and card games. Autograph sessions this year include epic fantasy writer Patrick Rothfuss (The Kingkiller Chronicle), video game reviewer “Angry” Joe Vargas (The Angry Joe Show), YouTube gaming channel personality Stacy Hinojosa (aka StacyPlays) and podcasters Cox n’ Crendor. $35-$75, 10am-midnight Fri-Sat, 10am-7pm Sun, Henry B. Gonzalez Convention Center, 900 E. Market St., (210) 207-8500, south.paxsite.com. – Kiko Martinez

A quick survey of Ron “Tater Salad” White’s promotional materials indicates it’s almost impossible to capture photographic evidence of the former “Blue
Collar” comic without a cigar in one hand and a scotch on the rocks in the other, so it’s only fitting that the premium VIP ticket package for his current tour is called the “200-Proof Experience.” For those of you drinking along at home, that’s 100 percent pure alcohol — two shots of Wild Turkey, hold the Turkey — and its White superfan (aka member of the “Rontourage”) equivalent includes an autographed pass, access to a post-show Q&A, a DVD copy of White’s Comedy Salute to the Troops and even a CD recorded by White’s wife, singer Margo Rey. Such a cross-promotion might seem out of place for another comic, but the personal nature of White’s storytelling guarantees true obsessives access to detailed accounts of his life with every stand-up special and podcast appearance. He’s essentially America’s drunken uncle who’s actually funny, so getting his family in on the act is as natural as the next round. $47.75-$246.75, 7pm & 10pm Sat, The Majestic Theatre, 224 E. Houston St., (210) 226-3333, majesticempire.com. — Jeremy Martin Sat 1/28
Compagnie Hervé Koubi 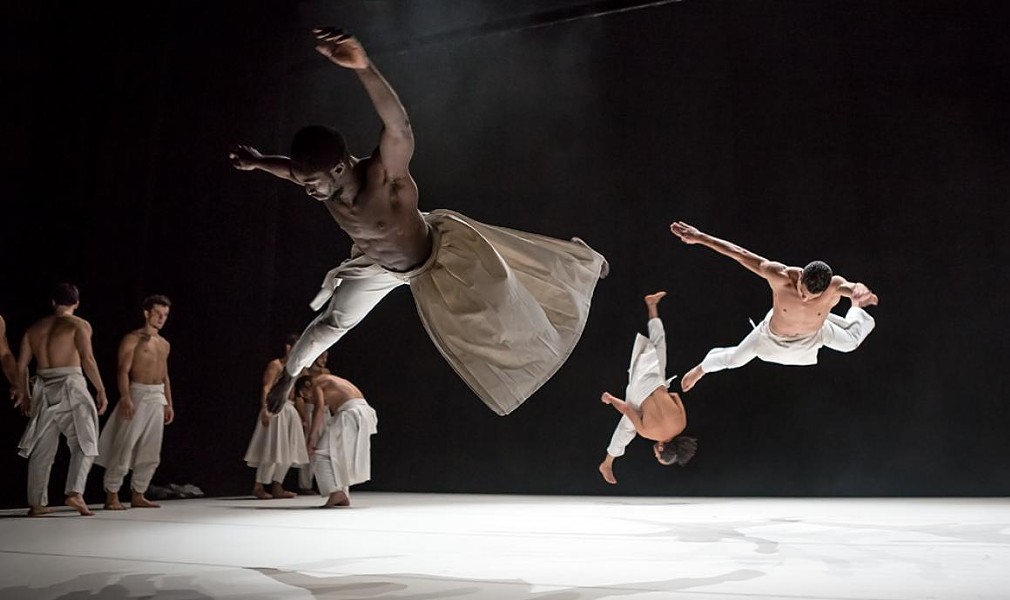 Technically, it’s more of a film showcase. Hosted by CO LAB, a “working
community for artists and creatives,” the non-film festival will feature local filmmakers looking for more exposure in their hometown and offer them an opportunity to network with peers in the local film industry. For this inaugural event, 11 short films will be accepted to screen across different genres. As of press time, no shorts had been selected, according to Corey Clark, founder of CO LAB and co-founder of the filmmaker’s showcase. Local filmmaker Chuco Garcia hopes to get some good news soon. He submitted a short documentary on local Chicano artist Adan Hernández. Local filmmaker Jesse Salazar III submitted his short mockumentary The Box Boy. The comedy tells the story of a father coming to grips with his young son living in a cardboard box in their backyard. “I submitted because I just like supporting anything that’s local and involves film,” Salazar said. “It’s fun to see other local indie work and show my stuff — if it gets in. Any time I can interact and network with other local filmmakers, I’m down.” $5-$7, 5-8:30pm, CO LAB, 723 N. Alamo St., (210) 901-9902, pointwestproductions.com/notafilmfestival. – KM

Vince McMahon’s legion of jacked-up, muscle-bound warriors rassle for the distinct honor of headlining WrestleMania in April when the WWE returns to San Antonio for the Royal Rumble. Unofficially dubbed “the kickoff to the road to WrestleMania” — WWE always had its way with monikers — the Royal Rumble has surprisingly taken place in San Antonio more than any other city (three times in the last 20 years). Iconic wrestling superstars such as John Cena, Goldberg, The Undertaker, and Brock Lesnar are scheduled to perform along with relative WWE newcomers AJ Styles, Roman Reigns and Kevin Owens. The main event of the evening is the fabled Royal Rumble match in which 30 wrestlers enter one ring and it’s “every man for himself.” The objective is to toss your opponent over the top rope until there is only one oiled-up rassler left standing. The victor then goes on to Orlando, not for Disney World but rather to headline the “grandaddy of them all,” WrestleMania. The Rumble is one of WWE’s most famous traditions (this is the 30th edition) and it’s a hoot for die-hard wrestling fanatics and casual fans alike. $45-$407, 5:30pm, Alamodome, 100 Montana St., (210) 207-3663, alamodome.com. — Chris McDonald