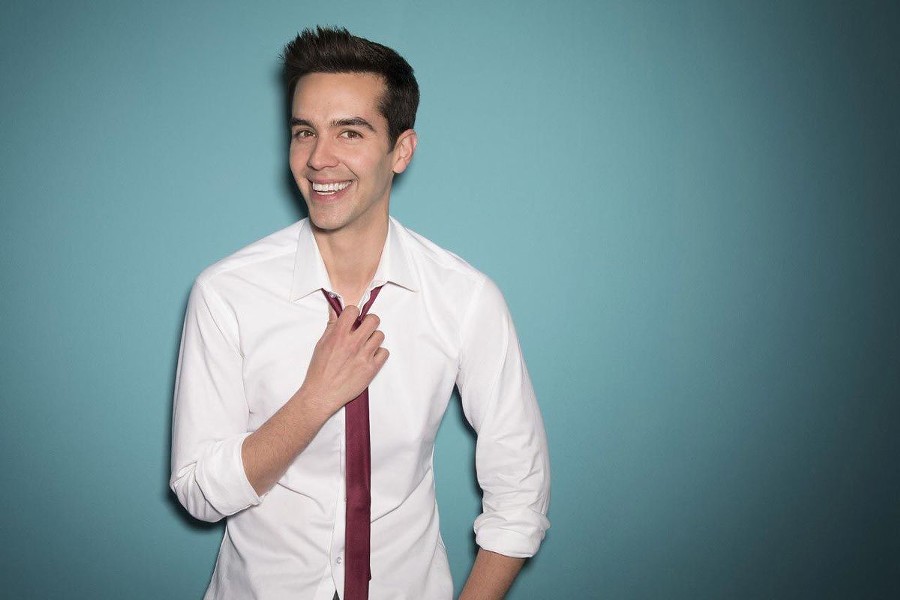 Magician Michael Carbonaro is probably one of the very few people in the world who could make you believe in the impossible. As the star of the popular reality TV show The Carbonaro Effect on TruTV, Carbonaro, 34, uses his talent as a magician to prank unsuspecting participants in real-world situations.

For example, during one episode of the show, Carbonaro, who was named Magician of the Year in 2014 by the Academy of Magical Arts (yes, that’s a real thing), posed as a movie theater concessions worker and coaxed a customer into believing he could convert a regular soda into diet by removing the sugar with a specialty strainer, right before his eyes. Carbonaro then poured the soda through the strainer and into another cup, and then proceeded to pour out a large amount of pure sugar he apparently strained from the original soda. The customer was dumbfounded.

Aside from his TV show, Carbonaro also tours the country sharing his own brand of magic on the stage. He will make his debut stop in San Antonio this Sunday, January 29 at the Majestic Theater at 7:30pm. The Current caught up with Carbonaro on the phone last week to talk about what inspired him to become a magician, how his salesmanship helps his craft and why he thinks people believe in the unbelievable.

We’re really looking forward to seeing you in San Antonio this weekend. Have you ever been here before?

I have not. I’ve been to Austin and Dallas and Midland. I’m really excited about performing at the Majestic. It’s so beautiful. Now, San Antonio is the home of [actor] Henry Thomas, isn’t it?

[E.T.] is like my favorite movie of all time. In a way, that movie brought up my love of magic and special effects. Seeing that movie as a child was a big inspiration. My first love before magic was special makeup effects. I wanted to be a special effects artist. I think movies like [E.T.] had a really big impact.

So, you were into monster makeup and stuff like that?

Yeah, I used to buy monster makeup and horror supplies from the local magic shop where I grew up in Long Island, New York. That’s when I started diverting to the other side of the store to watch some of the guys do magic. I really got into it. Special effects brought me to magic, and magic brought me to being a performer. That’s what I think audiences are going to see [during my stage performance] that is different than The Carbonaro Effect—it’s a chance to meet Michael the Magician, Michael the Ringleader of an entire evening of comedy and magic.

How did you come up with the idea of combining a magic show with a prank show in the first place and had there ever been anything like that in the marketplace before?

Yeah, I think there was, as early as Candid Camera. [Creator and producer] Allen Funt was the father all reality television and prank shows. Candid Camera is not too much different than what I’m doing [on The Carbonaro Effect]. I get to watch people react to bizarre and strange situations. Sometimes on [Candid Camera], they would do things that were a little bit magical. I remember [in one episode], a lady drove a car into a shop “without a motor.” You’d get all these reaction shots of these real mechanics scratching their heads like, “How is this woman driving in a car with no motor?”

So, what makes The Carbonaro Effect different?

What makes mine different, I guess, would be my personality.

I agree. Isn’t much of what you do underscore your talent not only as a magician, but also as a salesman? I mean, you get people to believe anything you tell them, no matter how insane it is.

Absolutely. It’s an artful deception like with a magician or a salesman or a con artist. You almost have to be an actor to trick someone. I think what a magician brings is wonder, light and curiosity in a positive way, whereas a con man might be trying to steal your money.

Or run the country.

If everything in the mind of the person you are conning is telling them that what they just saw is impossible, why do you think they still believe it happened?

I’m always fascinated by that. I think we’re all beautifully gullible. This isn’t about finding out who would believe something. It’s more about finding a way to let people wonder. Why do we believe these things? Since we were born, we’re used to seeing new and wondrous things that we don’t know how they work like 3-D printers or Bluetooth technology. We’re like, “Oh, wow, they figured out how to do that!”

Right! If I saw one of your tricks, I would probably think, “Well, I haven’t heard of this before, but maybe I’m just not in the know when it comes to this subject.”

Yeah, I think there are two paths people will go. The first: people will believe in the possibility of a new technology. So, some pranks on the show can be centered on that. Someone might’ve come up with a technology that can package a bowling ball into a flat cardboard box. There’s this little monkey wrench thrown into the brain and people begin to ask themselves, “Can they really do that?” Nature, too. Oh, shoot, I just thought of a third path. OK, well, the second path is superstition. People will believe in the chance of some kind of superstition like the universe being in a synchronicity that we don’t know about. It’s very funny how we’re all reduced to our primal selves when we’re put into a dark room. You put a frat guy in a dim antique shop and all of a sudden, maybe there is such a thing as a haunted monkey.

You also mentioned nature as a possible third path. Can you explain that one?

Oh, yeah, you inspired me this morning. People will believe that a spider could maybe weave an initial. Or maybe there are little beetles that can really assemble sticks into a certain pattern. We’ve seen things like that—like spiders making intricate webs—so maybe there is such a thing as a beaver that can carve a reed for a clarinet.

If you were on the other side of the trick and you weren’t a magician, do you think you’d fall for one of your pranks?

I would 100 percent. Of course, there are times when I’m like, “I can’t believe someone believed in that.” Sometimes I head into the day thinking, “Am I really going to try to get someone to believe that a full-sized boat on a harbor shrunk down to a tenth of its size because we used the wrong ceiling wax on it?” Somehow, yeah, they do. But, yeah, I do believe I would fall for it. I’d like to think that I would be that special kind of person who would stop and engage and try to wrestle with that little hole in the universe they just saw. That’s what makes [the show] so entertaining—when someone goes, “Wait a minute. Hold on. What just happened and how did that just happen?” I think the live show has a lot of that, too.

Some people might say that these days, with so many magicians out there doing their own thing, the industry is too saturated? Isn’t part of the allure of a magician or an illusionist the fact that very few people in the world can do what they do?

Well, to speak about over-saturation, the whole world is unbelievably saturated with anything and everything. You can find a lot of everything. Does it hurt magic to be “out there?” Not if it’s done well. There is some wonderful magic on television right now. I’m a huge fan and friends with Penn [Jillette] and Teller. I hope they don’t mind me saying this, but the biggest trick of their show (Penn & Teller: Fool Us) is that it’s not really a competition. I mean, it is, but it’s not. It’s really a secret variety venue for excellent magic performances. That’s what they look for. Getting to see that many people doing a different style of this art is inspiring and wonderful.

Of all the fake products you've featured on The Carbonaro Effect, which do you wish actually existed?

I would say the shoelaces that tie themselves. I can’t tell you how many times I’ve been caught in public with my laces untied. I’m just waiting for someone to come up to me and say, “Oh, can't you just magically tie them together?” I would probably run away crying, “Not without my magic fairy dust!”