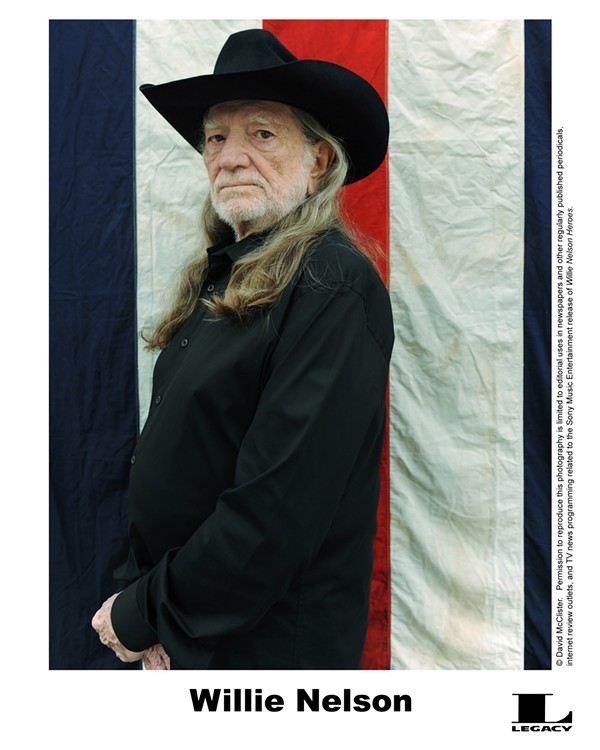 What more can be said about Willie? The man is an accomplished outlaw country singer, has released 200 albums across six decades and has won basically every award a musician can score. In other words, Willie is that kind of gentle, cool badass who won’t take shit from anyone, not even when the police try to take his, ahem, herbal refreshments away. (Seriously, just let the man be!) Catch his showcase at our very own San Antonio Stock Show and Rodeo. $13.50-$198.50, 7pm Thu, AT&T Center, One AT&T Center Pkwy., sarodeo.com. — Chris Conde

After spending four years as second chair cello in the dark and quirky cello band Rasputina, Zoe Keating embarked on her career as a soloist. During her performances, Keating incorporates the use of live looping equipment, which allows her to construct beautiful and intricate cello movements. The performance, put on by the nonprofit Musical Bridges Around The World, is one of many included in the International Music Festival, an annual multi-week and multi-venue project featuring world-class artists in performances designed to unite audiences one concert at a time by highlighting cultural diversity. Free, 7:30pm Thu, Southwest School Of Art, Coates Chapel, 300 Augusta St., (210) 224-1848, musicalbridges.org. — CC

“Multiples” is a recurring art show that seeks to dissolve the typically well-defined lines between artists and curators. Curated by a rotating mix of artists, local not-for-profit collectives and alternative galleries, “Multiples” is on a mission to showcase “a diversity of media and voices to the local landscape in an effort to expand the conversation of representation and identity within the arts.” For this incarnation of “Multiples,” the curators/presenters include Rigoberto Luna, Kristel Puente, Megan Solis and Jason Eric Gonzales Martinez. Each curator was given a room at Galería Guadalupe to work with, and the artists they selected to participate include Luis Mejico, Ana Fernandez, Jacinto Guevara, Agosto Cuellar, Anel Flores, Sarah Castillo and more than 10 others. Free, 6-9pm Fri, Galería Guadalupe, 723 S. Brazos St., (210) 271-3151, guadalupeculturalarts.org. — James Courtney

Creative Creatures, a recurring moveable feast of art and music in widely varying styles and genres, is back at Brick, following up last month’s successful three-year anniversary. This installment of Creative Creatures — which we love because it encourages networking and cross-pollination among disparate creators and communities — pays homage to the pioneering suspense/sci-fi/psychological horror series The Twilight Zone. Tributes to the Rod Serling-created universe of existential dread will come in a variety of forms, including themed artwork, costumes, a photo booth and even a special performance art piece by Miss Taint, based on the popular 1960 episode “Eye of the Beholder.” Musically speaking, the event features the stylings of Carly Garza, Voodoo Boogaloo and Pink Leche. On the arts/crafts side of things, more than 45 artists and artisans will be showing/selling their work. Food will be available from Frank. $5, 7pm-midnight Fri, Brick, 108 Blue Star, (210) 262-8653, facebook.com/creativecreaturessatx. — JC 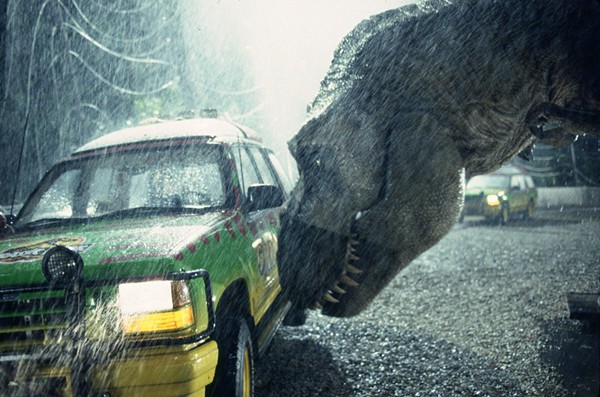 Synesthesia is that trippy neuropsychological phenomenon whereby stimulating one sense stimulates another – i.e., sounds create mental visuals. While scientists estimate only a small percentage of the population are true synesthetes, many of them are artists for obvious reasons. Disney’s 1940 classic Fantasia offered filmgoers a chance to commingle sight and sound by setting elaborate animated sequences to famous works of classical music. By illustrating Stravinsky’s ponderous “Rite of Spring” with scenes from Earth’s violent prehistory, animators gave people bored or confused by classical music a useful tool to make it more exciting: Think about dinosaurs. The San Antonio Symphony will be providing a similar service by playing John Williams’ score for Steven Spielberg’s groundbreaking special-effects showcase Jurassic Park alongside an HD projection of the film, creating an immersive experience in sight and sound and a decent excuse to watch a dude get ripped apart by velociraptors while you’re wearing a tuxedo. $25-$65, 8pm Fri, 2pm & 8pm Sat, 2pm Sun, Majestic Theatre, 224 E. Houston, (210) 226-5700, majesticempire.com. — Jeremy Martin

‘Twas a dark and stormy night that cast the King of Naples and his closest advisors upon a lonely shore … but more is afoot here than the shipwrecked nobles know. This isle is not uninhabited: For the past 12 years, Prospero, wizard and the former Duke of Milan, and his daughter Miranda have languished in exile upon the island with only the sprite Ariel and the bitter creature Caliban for company. Think of Prospero as an Elizabethan Petyr Baelish — pulling the other characters like marionettes to fulfill his own ends — for it was he that called up the storm to bring these members of Naples’ court to him, so he may exact revenge and restore his daughter to her rightful position as princess! Perfect for those seeking a lighthearted evening at the theater, Shakespeare’s The Tempest is an effortlessly written comedy from late in The Bard’s career, and centers on themes of forgiveness and redemption. $10-25, 8pm Fri-Sat, 3pm Sun, The Classic Theatre of San Antonio, 1924 Fredericksburg Road, (210) 589-8450, classictheatre.org.
— Kelly Merka Nelson

In its earliest incarnation as part of the Arthurian collection Perceforest (penned in the 1300s and printed two centuries later), the legend of Sleeping Beauty involves a beautiful young princess named Zellandine who suffers a flax-spinning accident, falls into a coma, gets raped by a knight and only wakes up after giving birth to a son. While key elements of this medieval folktale carried over into later versions stylized by the likes of Italian poet Giambattista Basile (who dubbed the compromised heroine Talia) and German duo the Brothers Grimm (who renamed her Briar Rose), the Sleeping Beauty burned into our collective consciousness more likely resembles Disney’s Princess Aurora, who’s awakened from her enchanted sleep by a modest kiss. Collaborating with theater director Ivan Vsevolozhsky and choreographer Marius Petipa, legendary composer Pyotr Ilyich Tchaikovsky adapted French author Charles Perrault’s late 17th-century iteration as a three-act ballet first staged in 1890. Now a beloved staple of the ballet repertoire that continues to inspire creative shifts and unexpected interpretations, The Sleeping Beauty arrives on the Tobin’s stage via local nonprofit Ballet San Antonio in a full-length production choreographed by BSA artistic director Willy Shives. $29-$134, 7:30pm Fri, 2pm & 7:30pm Sat, 2pm Sun, Tobin Center for the Performing Arts, 100 Auditorium Circle, (210) 223-8624, balletsanantonio.org. — Bryan Rindfuss

Retrofuturism, sexy superheroines and galactic fantasies collide in the wild and wonderful work of Mike Fisher, a local artist who unsurprisingly believes “that anything made after 1979 is crap.” A pulpy pastiche influenced by ’50s, ’60s and ’70s sci-fi and specifically “Wonder Woman, Deep Space Vixen and Interstellar Megahottie,” Fisher’s nostalgic, gory and slightly naughty inclinations don’t exactly factor into the news graphics he’s created for The Augusta Chronicle, The Charlotte Observer and, for the last decade, the San Antonio Express-News. Also the fearless leader of the solo operation Goofa Man Productions (which releases short, independent videos), Fisher reportedly spends an ungodly number of hours on each of his signature creations. “These drawings are beasts to create,” he told us. “So it has to be a drawing of something I would actually feel guilty about if I didn’t finish ... like a beautiful woman with candy cane hair!” In addition to said space-age candy striper, Fisher’s new exhibition of 20-plus “fantastic females” features the artist’s first ever mermaid, who’ll be on view at Black Moon Gallery “along with her pet.” Free, 7-10pm Sat, Black Moon Gallery, 1420 S. Alamo St., Suite 106B, blackmoonprint.com. — BR

Esas for SA is a community collective that looks to improve San Antonio and empower people through art. This week, the grassroots organization is hosting a unique celebration to mark its first year of existence. The pachanga, dubbed “Por Vida: Una Noche De Amor,” will be part art show, part benefit, part concert, and all badass. The evening will include adult beverages and a raffle, and also functions as a fundraiser/supply drive for Two Rivers Camp (near Alpine), which, like Oceti Sakowin at Standing Rock, has become a designated hub for Water Protectors — who, in this case, are challenging the construction of the Trans-Pecos Pipeline. Music will be provided by the ever-enchanting Polly Anna and Chulita Vinyl Club affiliate DJ Heavy Flow. Free, 8pm-midnight Sat, Pan Dulce Gallery, 1005 N. New Braunfels Ave., (210) 797-2628, facebook.com/esasforsa. — JC

If you think great San Antonio art, artists, galleries, and artistic communities are only to be found in Southtown, it’s high time to broaden your horizons. For starters, you’ll definitely want to get acquainted with the goings on in the area which includes Monticello Park, Jefferson, Woodlawn Lake, Keystone, Beacon Hill and Alta Vista. Collectively dubbed On and Off Fredericksburg, for their proximity to that thoroughfare, these neighborhoods are home to a huge number of artists, galleries, studios and arts-minded organizations. Back in 2004, Dr. Kellen McIntyre understood this area and its cultural value exceedingly well. After founding the community arts center Bihl Haus in a historic 1920s-era home, McIntyre developed close working ties to the many artists and artisans in the area. In conversation with and observation of the members of this already-thriving artistic hub, many of whom are still living/working there, McIntyre found that there was a real need for a community space and community events that allowed artists to show and sell their work with greater visibility. Ten years ago, the On and Off Fredericksburg Road Studio Tour was created in response to this need and McIntyre’s desire to create an art tour that would be “special, professional, well-packaged, and, most importantly, about and for the artists.” A Monticello Park resident herself, McIntyre noted that the planning of the sprawling tour —lovingly referred to as On and Off Fred — was a “synergetic and energetic” collaboration between herself and a handful of artists who lived and/or worked in the area. In the years since, new faces have helped round out a cast as eclectic as San Antonio itself, and new arts/culture organizations in the area have helped make On and Off Fred, which keeps its focus squarely on the locals, into a truly unique studio tour. As McIntyre explains it, “we have never been interested in non-local artists, from very early on we were committed to artists who live and/or work in the area.” On and Off Fred has certainly grown in participation, attendance, and scope — the first catalog, which is always written and put together by McIntyre herself, was a mere 25 pages, while this year’s is well-nigh 100 — but McIntyre doesn’t see its growth as a linear kind of trajectory. “It’s like a living, breathing organism that shrinks and swells,” she explained. So how do you get in on the action with On and Off Fred? First things first: get yourself one of the catalogs, which open up the tour like a map to hidden treasures and unexplored regions of delight. The catalog, which includes information on more than 60 featured artists and can be purchased through Bihl Haus Arts (2803 Fredericksburg Road), online, and select other vendors (see onandofffred.org for details), contains maps to help you navigate the area and a schedule of the many events (like poetry readings, performance art pieces, plays and live music) that will accompany the studio tour. It’s these extra events, coupled with the fact that there seems to be arty magic around every corner, that make On and Off Fred “so much more than just a studio tour.” $10-$15 (includes catalog), 11am-6pm Sat, noon-5pm Sun, (210) 383-9723 onandofffred.org. — JC