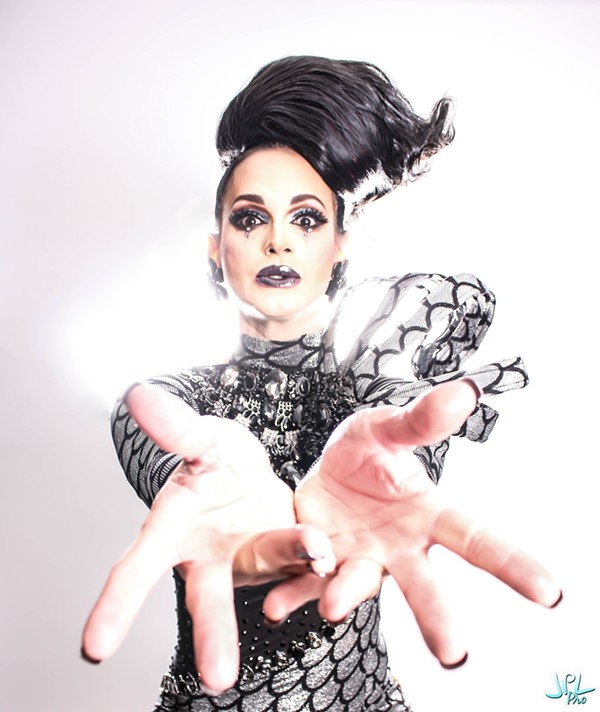 If you frequent local scenes inhabited by teased, tucked and tassel-twirling drag queens, burlesque performers and club crawlers, it’s quite likely you’ve crossed paths with photographer Julián P. Ledezma — who can often be seen going the extra mile for the money shot. A frequent contributor to both the San Antonio Current and its LGBT sister Out In SA, Ledezma isn’t just comfortable in over-the-top situations — he’s truly in his element, and that comes across quickly in his wild and witty work. Having recently moved his studio into a multipurpose facility at Woodlawn Pointe, Ledezma is in the process of assembling an epic series of photographs celebrating “queens” — including the drag variety and others who embrace glitter, sequins, dramatic makeup and sky-high heels. In essence a royal tribute to the strong women who raised him (his grandmother, mother and sister all passed away within a period of five years), his queens project makes its first appearance on Friday via “Invoking the Reign.” Both a preview of and fundraiser for grand things to come, the one-night-only affair combines a photography exhibit featuring more than 25 queens — from RuPaul’s Drag Race alums Alyssa Edwards and Cynthia Lee Fontaine to late local legends Erica Andrews and Jenny McCall — with wine, sweet treats and performances by contemporary classical/electronic duo Saturn Skies and aerial artists Keelin Christopher and Gary David. Those in the market for something shiny and new can snap up smartly priced prints, which range in price from $5 to $300. Free, 6-10pm Fri, Feb. 24, Living Church at Woodlawn Point, 702 Donaldson Ave., facebook.com/jplpro.