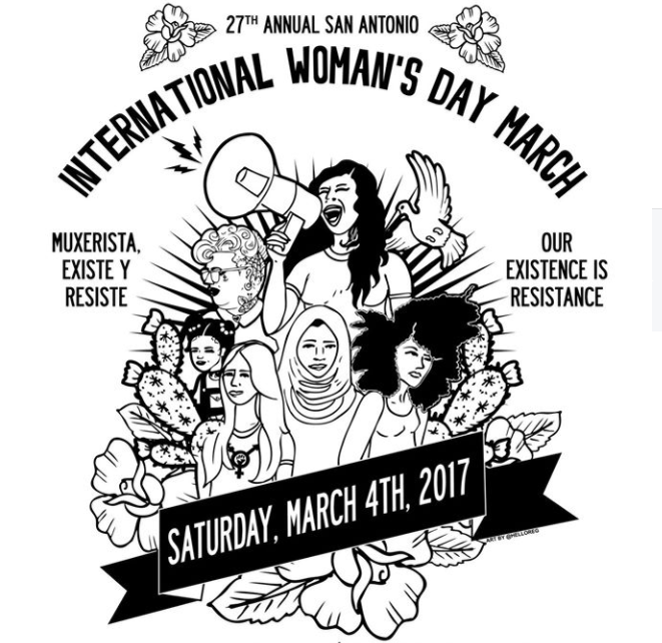 With the 2017 theme “Muxerista, Existe y Resiste”/“Our Existence Is Resistance," the 27th Annual San Antonio International Woman’s Day is ready for a day of action.

Celebrated annually worldwide, International Women's Day calls for gender equality and recognizes the political and social accomplishments of women, and this Saturday, march organizers Mujeres Marcharan are calling on San Antonians to show their support.

"We, like women and girls all over the world, are the voices of conscience, the roots of change and the leaders of local and global movements," said march organizers in a prepared statement. "Out of love for our communities, we come together time and time again to envision and create a world in which all people are free from exploitation, oppression and violence."

Since its inception, people have marched in recognition of International Women’s Day to demand voting rights, better wages and reasonable working hours. They're also pushing for reproductive rights, fighting against violence and misogyny, and advocating for social justice and equality.


Gaining momentum in 1990, San Antonio's march was inspired by the growing number of European Countries that were holding rallies as a way for women to voice their concerns related gender equality in the workforce and politics. On March 8, 1975, the U.N. formally recognized the year as International Women’s Year and marked March 8th as International Women’s Day. This year, marchers will meet at 11 a.m. this Saturday, March 4, at Plaza del Zacate, 501 W. Commerce., and the march will be followed by a rally, music, poetry and performances.


"We claim our own voices and come together to share them in public spaces," the march organizers said in a statement. "We march in solidarity with women and social justice movements around the world."