Since 1979, it only took Mendoza, Argentina’s Enanitos Verdes (“Little Green Dwarves”) two songs to become one of the most popular rock en español bands ever. Pop hymns “La Muralla Verde” (“The Green Wall”) and “Lamento Boliviano” (“Bolivian Lament”) will still be playing on Latin pop-rock radio and parties after the end of the world, even when only roaches survive. Hardliners wouldn’t find it difficult to dismiss Enanitos as a soft, catchy pop-rock machine. But they’re more than that: If you mix an eternally youthful singer (bassist Marciano Cantero) and the devastating right hand of guitarist Felipe Staiti, coupled with their ability to craft beautifully smart melodies and hooks that grab you by the balls, well … you could do a lot worse than that. Their most recent album, 2013’s Tic Tac, is a fine effort but an excuse to go where the meat is: Enanitos on tour. This is a rare San Antonio appearance, and they’re bringing their usual trio format with the great Jota Morelli (drummer for Fito Páez, Luis Alberto Spinetta, Al Jarreau). A sentimental affair not to be missed. $44-$55, 8pm Fri, Aztec Theatre, 104 N. St. Mary’s St., (210) 812-4355, theaztectheatre.com. — Enrique Lopetegui

Despite the cringes it might elicit, scientific “edutainment” is at the core of Brain Candy Live — an impossibly cool and nerdy collaboration between niche celebrities and “everyday heroes” Adam Savage and Michael Stevens. Playing on the wits and smarts of Savage (a former MythBusters host who’s built models for sci-fi kingpins ranging from Star Wars to The Matrix) and Stevens (a comic, editor and creator of the YouTube phenomenon Vsauce), the touring spectacle has been amusingly teased out as both “a two-hour play date with Walt Disney, Willy Wonka and Albert Einstein” and “a cross between TED Talks and the Blue Man Group.” Suitable for curious minds of all ages, the “interactive, hands-on, minds-on theatrical experience” changes in each city it visits, as audience members are pulled up on stage to participate in madcap experiments and other antics designed to “physicalize understanding.” $45-$75, 8pm Fri, The Majestic Theatre, 224 E. Houston St., (210) 226-3333, majesticempire.com. — Bryan Rindfuss 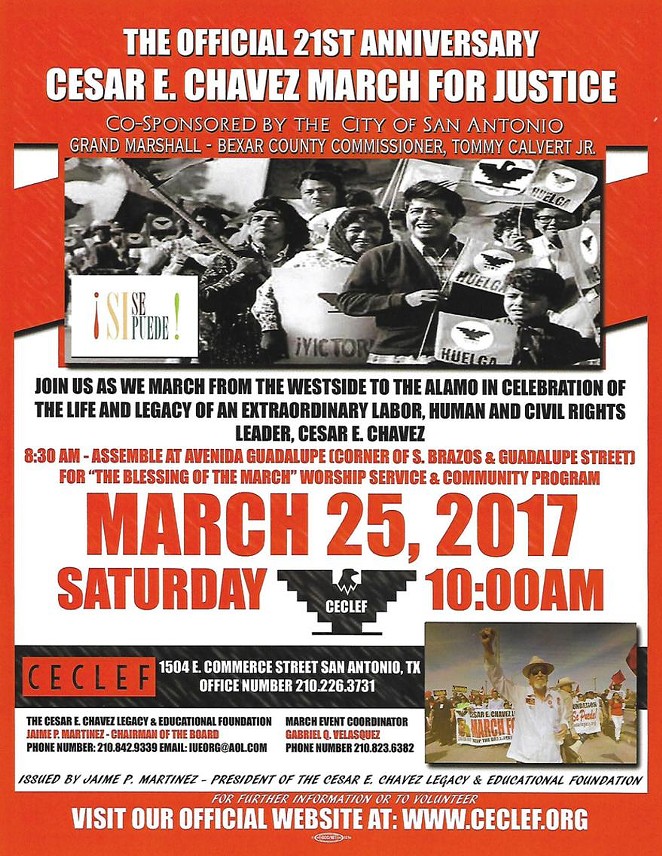 Co-sponsored by the César E. Chávez Legacy & Educational Foundation and the City of San Antonio, this 21st annual event celebrates the late labor, human and civil rights hero with a blessing, worship service and community program, followed by a march from the Westside to the Alamo. Free, program at 8:30am, march at 10am Sat, corner of Brazos & Guadalupe streets, (210) 226-3731, ceclef.org.
Sat 3/25
Scrap Arts Music

Formed in Vancouver, Canada in 1998, Scrap Arts Music bills itself as an “internationally renowned, athletic next-generation percussion ensemble.” Informed by the backgrounds and passions of founders Gregory Kozak (jazz, world music, avant-garde composers) and Justine Murray (design, stage direction, vernacular architecture), the outfit brings a truly fusionist approach to physical performances of entirely original pieces. Arguably as unusual as the music itself, the five-piece group’s traveling arsenal of 145 instruments (welded together from salvaged scrap and “offbeat materials ranging from accordion parts to artillery shells”) weighs in at nearly two tons. Promising a “delightful musical journey that the entire family can enjoy,” Scrap Arts Music brings its high-energy act to the Majestic for one night only, courtesy of Arts San Antonio. $29-$99, 7:30pm Sat, The Majestic Theatre, 224 E. Houston St., (210) 226-3333, artssa.org. — BR

Quite possibly Contemporary Art Month’s wackiest offering, “Pretty Plastic” celebrates two decades of the ever-playful, retro-futuristic stylings of Hyperbubble — a local synthpop act comprised of married couple Jess and Jeff DeCuir. Art scene fixtures who’ve performed at Luminaria, the McNay, SAMA and Blue Star, Jess (vocals, theremin, keyboards) and Jeff (vocals, synthesizers, sequencers) have made names for themselves abroad by touring and recording in England, Scotland, France, Germany, Italy and Japan. “A multimedia retrospective” complete with live performances, videos, photographs, costumes, posters and album art, “Pretty Plastic” borrows its name from a forthcoming compilation packed with songs such as “Synesthesia” (a love song to their synthesizers), “Non Biodegradable Hazardous Waste Disposal” (a track inspired by the Patriot Act) and 20 other oddities that run the gamut from dubs and remixes to obscure TV show soundtracks. Hosted by K23, the evening kicks off with a performance by “visionary space cowboy” Garrett T. Capps (9pm) and will be recorded live by Chicago-based filmmaker Joe Wallace for his upcoming project Cowgirls and Synthesizers. $5, 7-11:30pm Sat, K23, 702 Fredericksburg Road, (210) 776-5635, k23gallery.wixsite.com/k23tx.
— BR

Commemorating the 30th anniversary of the Esperanza Peace and Justice Center and timed to coincide with Contemporary Art Month and Women’s History Month, “Aquí Estamos y No Nos Vamos (We’re Here and Not Leaving)” showcases artwork by more than 40 women of color. In a statement, organizers say the show “highlights the resistance, solidarity, anger, hope and healing women of color are experiencing in response to the abusive and oppressive rhetoric that was propagated during Trump’s campaign and has carried on into his presidency.” According to a press release, the artists featured in the exhibit are “working class, immigrant, queer, and create artwork ranging from traditional visual art to sound art to sculpture to textile and much more.” The group show is being curated by Rebel Mariposa, the proprietor of La Botánica vegan restaurant who is also active in performance and visual art circles. Most recently, Mariposa co-curated a solo show for documentarian and multimedia artist Arlene Mejorado titled “Califas Lens, San Anto Heart: Outside Looking In,” which won a Fotoseptiembre USA Choice Award in 2016. Free, 6-9pm Sat, Esperanza Peace and Justice Center, 922 San Pedro Ave., (210) 228-0201, esperanzacenter.org. — Sam Sanchez
Sat 3/25
Emerald Ball

From its earliest stages as a group of concerned citizens (2009) to the development of a board (2011) and the opening of administrative offices on East Mistletoe (2014), the nonprofit Pride Center San Antonio (aka The Center) has dedicated itself to supporting the lesbian, gay, bisexual, transgender, questioning and ally community in Bexar County. As a means to further The Center’s commendable efforts and goals, an eclectic array of drag and burlesque talents come together each year for the Emerald Ball fundraiser. Organized by photographer about town Julián P. Ledezma (JPL Productions) and hosted by inimitable camp queen Tencha la Jefa, the sixth annual affair takes over the Guadalupe Theater with a BYOB evening featuring performances from Out In SA covergirls The Juniors (aka Chyna Cravens, Sephwhora 51 and Ariyah 51), Toni R. Andrews, Amerie Parker, Nilaya Milan Mathews, Anny Conda, Stephan Gaeth, Keelin, Kristi Waters, Jorgeous Waters, Sharkeisha Banks, Azul Barrientos and Taint. $12-$15, 7-11pm Sat, Guadalupe Theater, 1301 Guadalupe St., (210) 370-7743, pridecentersa.org. — BR

In a modern world dominated by screens and smartphones, events like Síclovía are a refreshing, energizing and fun way for the entire family to sign-off, unplug and adventure around designated car-free San Antonio streets on bikes, skates or in running shoes. The cycle-centric concept Ciclovía (Spanish for “cycleway”) has its origins in 1976 Columbia, when the choreographed weekly events became implemented and supported by the city of Bogotá. Since then, the world has seen a trend in adaptations taking place all over the globe — in Australia, Brazil, Canada, Mexico and all over the U.S. San Antonio’s adaptation, launched in 2011 as a collaboration between the YMCA, the Mayor’s Fitness Council and others, is considered the Alamo City’s “largest free health and wellness event” and routinely draws more than 65,000 participants. The Spring Síclovía event has partnered with the San Antonio World Heritage office, promoting the protection and preservation of cultural and national heritage worldwide. Síclovía’s route covers 2.5 miles, starting at South Flores and East César Chavez, continuing downtown on South St. Mary’s to the intersection of Roosevelt and Steves to its end at Mission Concepción. Designated Reclovía areas can be found along the route offering live music, group exercises, food, water and restrooms. Free, 11am-4pm Sun, S. Flores St. at E. César Chávez Blvd. to Mission Concepción (807 Mission), ymcasatx.org/siclovia. — Kimberly Rivera 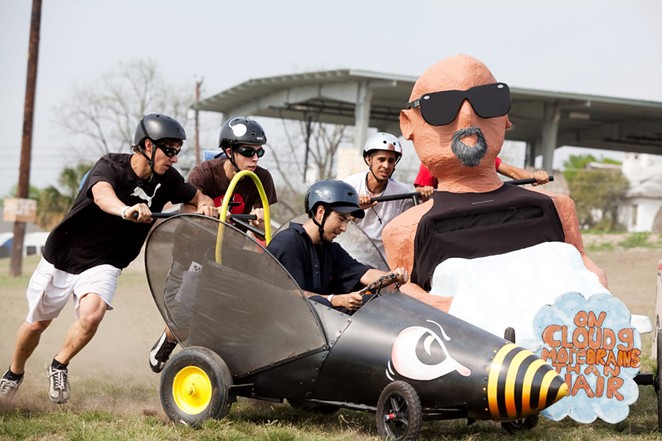 Teams of three compete in heats for prizes in Main Event, Granny Races, Cookie Crunchers, and Best in Show categories. Each team is responsible for the design, construction, and materials (preferably recycled) of their carts — sturdiness, safety and creativity should all be considered. Free, ($30 per team at dignowityderby2017.eventbrite.com), 2-6pm Sun, Lockwood Park, 801 N. Olive St., facebook.com.