Although he relocated to New York more than 15 years ago, accomplished artist Alejandro Diaz has maintained an unmistakeable presence in his native San Antonio via inclusion in collections and exhibitions, and the continued influence of Sala Diaz, the experimental art space he launched in Southtown in 1995. As he told the Current in 2015, Diaz started making “populist art” as a way to make ends meet in New York City, selling tourists curious cardboard signs printed with phrases such as “Mexican Wallpaper” and “Audrey Hepburn Was Here” (which he naturally sold in front of Tiffany’s). Often employing humor and language to investigate identity politics and Tex-Mex culture, Diaz returned to the Alamo City two years ago for the solo show “It Takes a Village.” Organized by the Linda Pace Foundation, the exhibition addressed class and culture via works that reinterpreted iconic styles and involved artistic collaborations with local faux-bois master Carlos Cortez and artisans from Guadalajara. Anchored by that 2015 show, the hardcover catalog Alejandro Diaz: It Takes a Village goes beyond the exhibition to unpack, celebrate and explore the significance of Diaz’s work through witty commentary provided by San Antonio art star Franco Mondini-Ruiz and insightful essays penned by LPF trustee Kathryn Kanjo and curator/art historian Rita Gonzalez. In celebration of its recent publication, LPF brings Diaz back home for a book release party and signing that comes complete with refreshments and musical entertainment. Free, 6-8pm Thu, Brick, 108 Blue Star, (210) 227-8400, lindapacefoundation.org. — Bryan Rindfuss 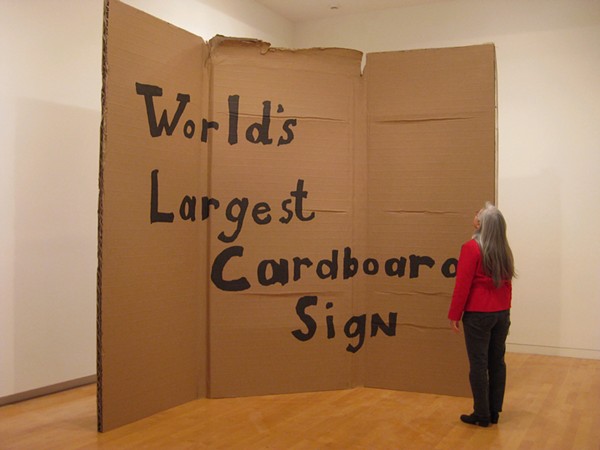 Writer/director Jaston Williams brings his cross-section of life in the “third-smallest town in Texas” to the Tobin this week as part of the latest tour of Greater Tuna. A hit since its premiere in Austin in the early ’80s, Greater Tuna sends up outmoded thinking without malice in its affectionate portrait of a town in which “the Lion’s Club is too liberal and Patsy Cline never dies.” Like a countrified Canterbury Tales, the show moves across a tableau of characters that range from small-town radio disc jockeys to God-fearing members of the town’s morality police, the “Smut Snatchers.” For many, Greater Tuna evokes all-too-familiar childhood trips to visit elderly relatives in the middle of nowhere, but this recognition isn’t required to get a kick out of the show, which this time around stars Ryan H. Bailey, Tim Leavon and Will Mercer. $19.60-59.50, 7:30pm Thu, Tobin Center for the Performing Arts, 100 Auditorium Circle, (210) 223-8624, tobincenter.org. — Kelly Merka Nelson

Arts education programs nationwide have faced drastic defunding in recent years, but some organizations remain resilient in their support of young artists. Local nonprofit SAY Sí has been providing San Antonio’s youth with quality, tuition-free artistic education for over 20 years. Their ALAS Youth Theatre Company encourages students to use their life experiences, ideas and observations to create original productions. A local educator and musician, Dr. Marco Cervantes believes in empowering young minds and the use of artistic expression to advocate for social issues. His hip-hop alter ego Mexican Stepgrandfather is part of the Afro-Chicano ensemble Third Root. Their music, which he labels “scholarly rap,” is filled with messages about socio-economic divides, social injustice and uniting communities. A National Poetry Month collaboration between Cervantes and ALAS, “No Filters” offers SAY Sí students a platform to share their original music, poetry, and performance pieces at two shows preceded by open mic sessions. $5 (free for youth), 7-9pm Fri-Sat, SAY Sí, 1518 S Alamo, (210) 212-8666, saysi.org. — Kimberly Rivera

Longtime SA trio Buttercup are back with their first new album in eight years, Battle of Flowers. The 12-song record was mixed by Portland’s Larry Crane, who’s worked with artists like the late Elliott Smith, Death Cab for Cutie and Sleater Kinney, to name a few. Described as “jangly art-rock for the left side of the brain” by NPR, singer Erik Sanden, guitarist Joe Reyes and bassist Odie joined forces in 2003 and have been cranking out rich indie rock ever since. Joining Buttercup on drums for the release show is Apple In Stereo’s John Dufilho, whose band Clifffs is also set to play along with Austin’s Slomo Drags. With more than 15 years in the Texas live music circuit, Buttercup remain a staple of the burgeoning indie scene in Alamo City. $20-$30, 8:30pm Fri, Charline McCombs Empire Theatre, 226 N. St. Mary’s St., (210) 226-3333, majesticempire.com. — Chris Conde 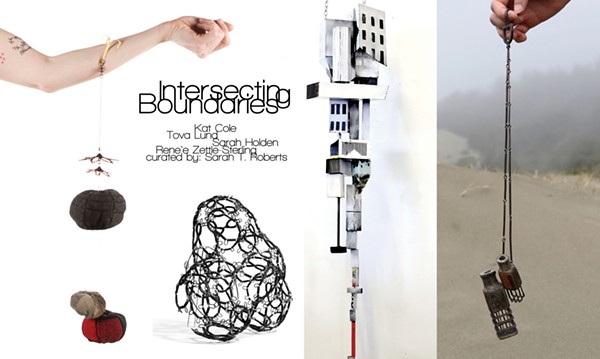 Blurring the lines between R&B and pop music with her vocal range and dexterity, JoJo is becoming a notable voice in the world of pop music. Raised in Massachusetts, JoJo, born Joanna Noëlle Blagden Levesque, drew the attention of Blackground Records (Aaliyah, Timbaland) after the singer competed on the television show America’s Most Talented Kids in 2003. Eventually signing a record deal with Blackground, Levesque balanced her time between acting and singing for a few years before choosing to focus primarily on singing and finally landed a deal with Atlantic Records. With a style reminiscent of ’90s R&B artists like Monica, yet still having a contemporary flare about her music, Levesque is actually an artist that doesn’t need to hide behind any sort of auto-tuner for her voice. $20, 7pm Fri, Paper Tiger, 2410 N. St. Mary’s St., papertigersa.com. — CC 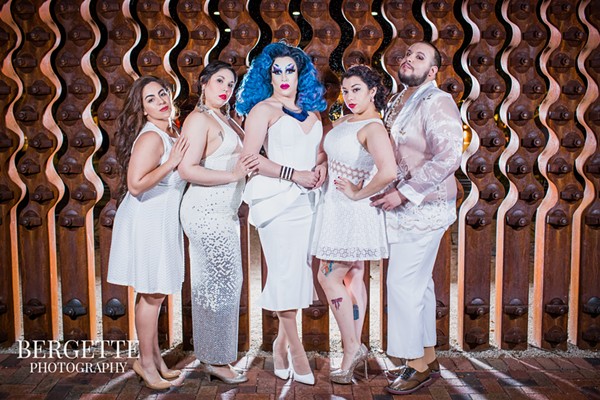 In an interview that recently aired on Vice News Tonight, White Stripes frontman and Third Man Records boss Jack White said that the huge resurgence in the popularity of music on vinyl is occurring because, among other reasons, vinyl is “reverential.” That seems about right. There’s a certain sense of respect and even awe that accompanies the large, physical article. Inspired by their love of vinyl, the folks of Pan Dulce Gallery are presenting “Hot Wax: An Art Exhibition for Vinyl Lovers.” Featuring work rendered on vinyl records by 20-plus local and regional artists, the event one-ups that reverence White mentions. By creating works of art on old vinyl records, these artists have repurposed the artifacts in a way that celebrates their past lives, as well as their materiality/texture. Among the local artists showing are Hello Reg (unique, feminist, often bawdy graphic design), Daphid (pop art, often featuring musicians and other celebrities) and Jason “PopGuy” Ibarra (quirky, often dramatic, puro San Anto). Free, 7pm-midnight Sat, Pan Dulce Gallery, 1005 N. New Braunfels Ave., (210) 797-2628, facebook.com/pandulcegallery. — James Courtney 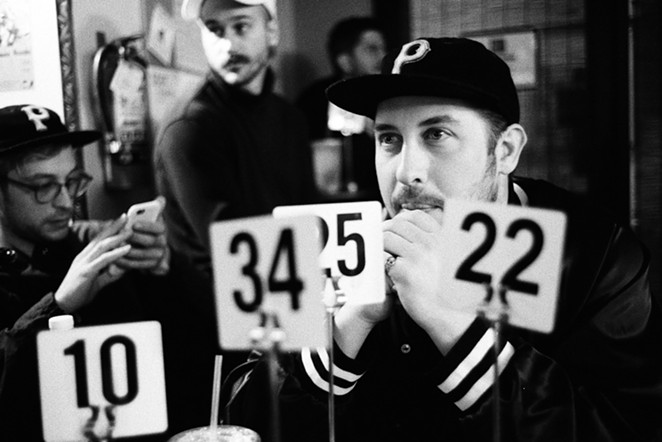 Formed out of the dissemblance of the band Anatomy of a Ghost, Portugal. The Man got their start with their first release Church Mouth, which was followed by a short tour with Circle Takes the Square and screamo heavy-hitters Thursday. The five-piece had traces of post hardcore in their music in the early years, (which made sense for touring with Thursday), but over time and with every release of a new record, prove that they’re committed to developing and evolving their sound, which has gradually transitioned into the slightly electronic, psychedelic indie rock. After throwing out an entire album they had been working on since 2013, the band is back with a new collection of music entitled Woodstock, which is said to come out sometime in June. $25-$40, 8pm Sat, Aztec Theatre, 104 N. St. Mary’s St., (210) 812-4355, theaztectheatre.com. — CC

If chocolate bunnies, egg hunts and Marshmallow Peeps make you want to crawl into a dungeon, local “fetish production company” Temple of Flesh has just what the doctor ordered. Known as both Exotic Easter and the San Antonio Fetish Ball, the always-provocative celebration has embraced myriad themes (pinup girls, vaudeville, steampunk and beyond) while hippity-hopping across town (from the Cameo Theatre to Sam’s Burger Joint to the Korova and points in between) and collaborating with burlesque performers, adult film stars, artists and musicians. Benefiting the local nonprofit BEAT AIDS, Exotic Easter 17 puts a naughty spin on Holy Week with an evening inspired by famous villains old and new. Co-hosted by pageant-winning drag diva Sasha Taylor and fetish performer Jericho Edge, the adults-only extravaganza serves up a boundary-pushing buffet of “fetish frivolities,” including an original melodrama by Jules Vaquera, performances by aerial artist Queen Anthuros and Austin-based outfit EBM Dollz, an erotic installation created by Tofenburg Media, complimentary latex body painting, vendors specializing in adult novelties and a “fully equipped dungeon” for “curious seekers of pleasure and pain.” $20-$25, 8pm-2am Sun, Players Club, 11431 Perrin Beitel Road, (210) 691-2050, safetishball.com. — BR