It’s been credited with humanizing inmates (The Washington Post), igniting a TV revolution for women (New York Post) and even changing the way we talk about TV (Time) — and those are but a few of the notches on the belt of Jenji Kohan’s highly addictive Netflix series Orange Is the New Black. Based on a memoir by Piper Kerman (who identifies as bisexual and spent 13 months in a Connecticut prison on money laundering and drug trafficking charges), the Emmy-winning show has championed LGBT equality by normalizing lesbian sex scenes (some take place on the outside in the form of flashbacks) and introducing the world to trailblazing transgender actress and advocate Laverne Cox (whose character Sophia Burset returns to the fifth season of OITNB on June 9). 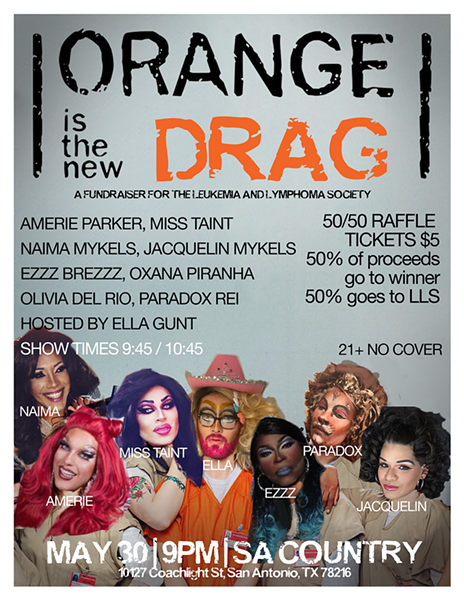 Taking all this into consideration, it should come as no surprise that OITNB often serves as creative inspiration for LGBT events and happenings — including last year’s drag-star-studded, prison-themed production of The Rocky Horror Show at the Josephine Theatre. Guests can expect to see at least a few orange jumpsuits at the Tuesday night fundraiser Orange Is the New Drag. Hosted by the gender-blending performer Ella Gunt in the casual confines of SA Country Saloon, the evening unites the drag talents of Amerie Parker, Miss Taint, Naima Mykles, Jacquelin Mykles, Ezzz Brezzz and Oksana Piranha, with proceeds benefiting the Leukemia and Lymphoma Society. Free, 9:45pm & 10:45pm Tue, May 30, SA Country Saloon, 10127 Coachlight St., (210) 525-0915, mwoy.org.