Listen: If you saw A.J.’s name and got excited and you already know, quit reading this description and get yourself tickets RTFN, ’cause they’re selling out fast. If you need some extra context for why you might wanna pay for the privilege of seeing this former Oakland Raiderette-turned-Mad TV-alum, aka former King Burger-employee-turned-whatever-it-is-she’s-doing-now Bon Qui Qui (checkout her “Homegirl Saccurity Company”) — let alone paying double the door price to meet her in person after the show — stream her specials Not Fancy and The Homecoming Show on Netflix and then hope there’s some tickets left by the time you get done. Then you’ll just have to pay for whatever’s available. Consider that your you-ain’t-already-know tax. $36-$72, 8pm & 10:15pm Thu, 7:30pm & 10pm Fri, 7pm & 9:15pm Sat, 7pm Sun, Laugh Out Loud Comedy Club, 618 NW Loop 410, (210) 541-8805, lolsanantonio.com.
— Jeremy Martin
Fri 7/21
Deception by Design 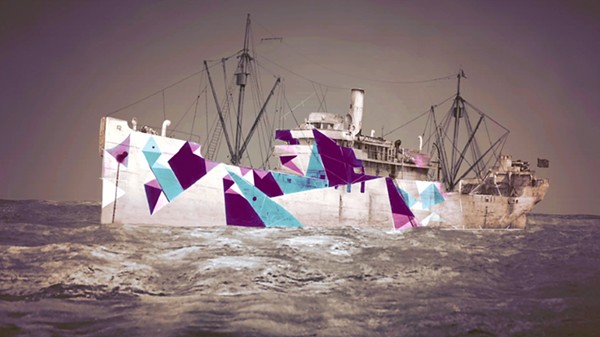 Described as “a critical look at digital escapism and current control techniques of our ongoing spectacular society,” Blue Star Contemporary’s “Augmented Reality” unites six artists who creatively mine the intersections of visual art and the technology. Opened in June and on view through September, the group show shares “parallel themes and practices” with Deception by Design — a 2015 Australian documentary screening in conjunction with BSC’s Film Friday program. A project five years in the making, the hour-long doc investigates the “critical but little-known role” artists have played in warfare through the development of camouflage and other forms of visual trickery. Although first proposed by 19th-century American artist and naturalist Abbott Thayer, camouflage first emerged in the military realm during WWI-era France, where camoufleurs hand-painted cloaks designed to mesh with natural surroundings. Besides outfitting soldiers, these artists also obscured potential targets — building artificial suburbs atop aircraft factories and even papier-mâché horse carcasses for snipers to hide inside — and creatively confused enemy submarines by painting thousands of warships with striking patterns inspired by Cubism and other art movements. Informed by more than 20 interviews with camouflage experts, historians and camofleurs, Deception by Design sheds light on the roles of an array of extraordinary characters, including Retired Lieutenant Colonel Timothy O’Neill (considered the father of digital camouflage), Hyperstealth Biotechnology Inc. CEO Guy Cramer (whose “quantum stealth” invisibility cloak “is so top secret, that no one is allowed to see it”) and anti-surveillance designer Adam Harvey (who creates “anti-drone” garments that hide wearers from infra-red surveillance). Free (registration requested), 6pm Fri, Blue Star Contemporary, 116 Blue Star, (210) 227-6960, bluestarart.org. — Bryan Rindfuss
Fri 7/21
The Righteous Brothers

It may come as a shock that The Righteous Brothers’ song “You’ve Lost That Lovin’ Feelin’” is in the top three of most played songs in the world. In an article that came out a few years back, Time magazine showed that the blue-eyed, soul duo’s hit came second to, get this, fucking “It’s A Small World (After All)” — lol, what? Also, In his book The Time of My Life: A Righteous Brother’s Memoir, Righteous Brother Bill Medley says the group got their name from black members in their audience that would say “that’s righteous, brothers!” Besides coming in second to the song that plagued the nightmares of children for generations, and naming themselves after something someone shouted at them once, The Righteous Brothers and their music are still obviously legendary and played an important role in shaping the future of American rock and roll. $34.50-$89.50, 7:30pm Fri, Tobin Center for the Performing Arts, 100 Auditorium Circle, (210) 223-8624, tobincenter.org. — Chris Conde
Fri 7/21
Zarafa

Furthering the argument that San Antonio Museum of Art’s Family Flicks series is probably one of the best things you can do for/with your kiddos (or yourself, your friends, etc.) this summer, the latest installment features the French-Belgian animated film Zarafa, directed by Rémi Bezançon and Jean-Christophe Lie. In this touching and occasionally heart-wrenching tale, young orphan Maki, who has been sold into slavery, befriends a giraffe named Zarafa, who is also an orphan. Through a bevy of enchanting and harrowing adventures, Maki and Zarafa prove to be each other’s strongest allies. This excellent movie, aside from being a pleasure to watch, can provide valuable insights into friendship, loneliness, otherness, family and even some of the darker realities of the world, like slavery and a slew of other abuses committed, all too often even today, with impunity in the face of a world that only seems just for certain select groups. Free, 8pm Fri, San Antonio Museum of Art, 200 W. Jones Ave., (210) 978-8100, samuseum.org. — James Courtney
Sat 7/22
Babewatch!

The cowboy is one of the most identifiable symbols of North America, with its roots in Mexico’s vaqueros who herd livestock on horseback. Vaquero traditions quickly spread across the South, and are now deeply instilled in the identity and culture of the United States. The National Day of the Cowboy commemorates the American icon and Mexican mentors whose image “transcends time, gender, ethnicity, and geographic boundaries,” explains Briscoe Western Art Museum president and CEO Michael Duchemin. The third annual National Day of the Cowboy begins at high noon, featuring bilingual museum tours, cowboy demonstrations, arts and crafts, food, craft beer and more. The Railhouse Band will perform live country music during fun family activities including barrel racing, horseshoes and a “You’ll Shoot Your Eye Out” shooting gallery. Enjoy peach cobbler and biscuits served in the traditional cowboy style by Chuck Wagon Cooking, and cool down with free cold beer sponsored by Ranger Creek Brewing and Distilling. Herd up the family and mosey on over to the Briscoe to discover fun facts and artifacts of the cowboy and vaquero lifestyle. Free, noon-4pm Sat, Briscoe Western Art Museum, 210 W. Market St., (210) 299-4499, briscoemuseum.org. — Kimberly Rivera
Sat 7/22
Dos Chicanos Un Camino

The season opener for Teatro Audaz is a comic play that starts off with a DJ radio show — a love-line type scenario where every caller seems to have similar stories of cheating or behaving badly in a relationship. It also tackles the subject of not feeling Latinx enough for not speaking Spanish. Set right here in San Antonio, the play makes a number of local cultural references, including mentions of Brackenridge Park, the Spurs, Girl in a Coma and people being called “Northsiders.” $10-$20, 7:30pm Sat, The Bang Bang Bar, 119 El Mio Drive, teatroaudaz.com. — Kelsey Valadez
Sat 7/22
Earth, Wind & Fire with Chic featuring Nile Rogers 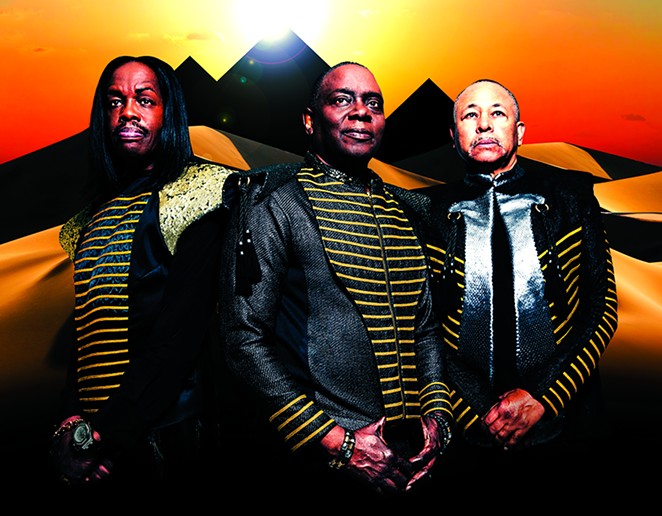 From winning Grammys to earning lifetime achievement awards and being inducted into the Rock & Roll Hall of Fame – Chicago’s dynamic Earth, Wind & Fire really doesn’t need any introduction. Since the 1970s, the 10-piece band has been showing up on party playlists across the world with its thick blend of R&B, soul, funk, jazz, disco, pop, rock, Latin and African music. Also on the bill is Chic featuring Nile Rodgers, who rose to fame during the disco era with hits “Le Freak,” “Everybody Dance” and “I Want Your Love,” to name a few. For a night that’s sure to be nostalgic, don’t miss this show which is guaranteed to make you awww – freak out! $24-$237, 7pm Sat, AT&T Center, One AT&T Center Pkwy., (210) 444-5000, attcenter.com. – CC
Sat 7/22 - Sun 7/23
Float Fest

If the whole idea of Float Fest — the Central Texas music festival that encourages and even facilitates tubing (though you can't actually float while watching the performances) — seems kinda kitschy and ridiculous to you, that's probably because you have good sense, or perhaps you just haven't downed enough Lone Stars today. As we previously announced, the lineup for this year's edition of the Martindale-based bash is easily the fest's best and most eclectic yet. Here's a quick look at a few of the acts we are most looking forward to catching live. (By the way, don't forget to notice that there is a shuttle service and camping options available for this thing. Party smart.)

Weezer, for reasons that should be fairly obvious, is a band that you want to see live every chance you get. The aging alternative power-pop crew may have dropped a few too many shitty albums since its last real winner, but Weezer has never ceased to be excellent in the live setting, drawing keenly on the high points of a large, strange, and often brilliant back-catalog. Rivers and the boys know what you want and, at least in terms of recent set lists, they have been delivering mightily. Plus, the band's last album was the best thing we've heard from Weezer in a long while.


Mac Miller may be most widely discussed now as the unlikely beau of Ariana Grande, but followers of hip-hop know that dude can seriously rap. Emerging from his frat rap haze days with 2013's excellent Watching Movies with the Sound Off, the rapper/producer has been on a creative roll these past several years.


To be sure, Passion Pit, the indietronic/psych-dance-pop act, which is essentially the solo project of Michael Angelakos, though he has a live backing band, probably belongs more in a dingy discotheque than along the banks of a river in Central Texas. But, any chance to catch Passion Pit in our neck of the woods is a blessing. The act’s most recent release is the endlessness enjoyable, multi-faceted, and aptly-titled Tremendous Sea of Love. If you haven’t had a chance to dig that album yet, consider it your mission to give it a few spins before Float Fest.


MGMT, which is still supposed to release a new album this year, has always been better on record than in the live setting. That being said, the group has consistently improved. The electronic indie rock band's most recent effort (2013's MGMT) found them exploring a fuller sound, with more live instrumentation, which led to its best live show yet.