Motherhood is no joke, but to Kristen Hensley and Jen Smedley, the women behind the hilariously honest web series #IMOMSOHARD, it kind of is. With two husbands, four kids and three dogs between them, Hensley and Smedley bring comic relief to motherhood, body odor, the stresses of marriage and lots more in the form of wildly relatable stand-up. The stories and exploits of these mothers are sure to answer your “Do other moms do this?” questions. The innovative duo prove that being a mom is far from glamorous and often thankless — but they’ve learned to laugh it off and aim to bring those laughs to moms across the country. Every mother deserves a night out, so grab your besties, leave the kids with dad or a sitter, and prepare for a night of uncensored real-life “momedy.” $39.75-$49.75, 7:30pm Thu, Tobin Center for Performing Arts, 100 Auditorium Circle, (210) 223-8624, tobincenter.org.
— Kimberly Rivera
Thu 7/27
“The Giving Distance”

Although she’s likely best known for her realistic drawings of skulls and bones, local artist Kristy Perez also sculpts, paints, designs and collaborates with her partner Britt Lorraine on sets and concepts for contemporary dance pieces. Possibly even lesser known are Perez’s poems, which stemmed from the attention she gives to the titles of her pieces. Curated into her first group show by late local legend Chuck Ramirez in 2006, Perez earned an Artist Foundation of San Antonio grant in 2007 and has exhibited consistently ever since. Lately, Perez has been busy at work on “The Giving Distance,” a solo exhibition opening July 27 at the Southwest School of Art. In addition to two large-scale portraits (one of herself, one of Lorraine), one of the show’s key elements is a bound book combining minimalist, mixed-media abstractions, representational drawings and poems. Solo exhibitions by local photographer Jack McGilvray (“The Lake House”) and painter Kristy Deetz (“Through the Veil”) open in tandem. Free, 5:30-7:30pm Thu, Southwest School of Art–Navarro Campus, Russell Hill Rogers Gallery II, 1201 Navarro St., (210) 224-1848, swschool.org. — Bryan Rindfuss
Thu 7/27 - Sat 7/29
Michelle Wolf 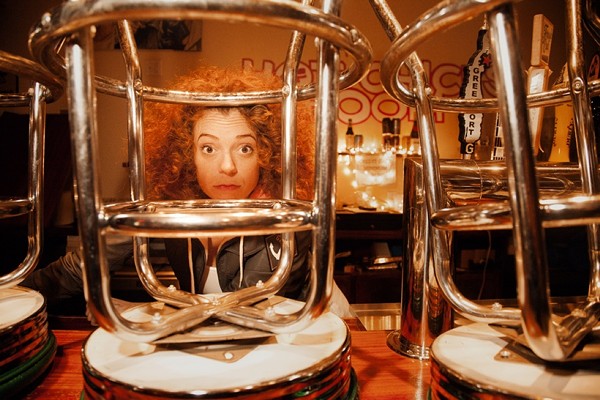 You may have first seen her portraying “Grown-Up Annie” on Late Night with Seth Meyers, or interviewing an itchy-buttholed candidate for an internet startup on the web series Now Hiring, but seriously folks, stand-up comic and Daily Show correspondent Michelle Wolf began her post-collegiate career working at financial institutions Bear Stearns and JPMorgan Chase. “For the most part,” she told The Guardian last year, “there was just a lot of people yelling at each other and getting mad for no reason and trying to place blame. I was like, ‘I’m turning into a bad person.’” The unpleasant experience obviously helped her pinpoint hypocrisy as she does when mock-celebrating Kellyanne Conway’s mind-boggling lying skills or skewering the sexism of the GOP’s proposed healthcare bill on Comedy Central’s long-running news sendup. But Wolf also told The Guardian, “If I have to make four more years of Donald Trump jokes, that will drive me insane,” which is probably why she tempers her political commentary with jokes about how weird dudes’ balls look. $16, 8pm Thu, 8pm & 10:15pm Fri-Sat, Laugh Out Loud Comedy Club, 618 NW Loop 410, (210) 541-8805, lolsanantonio.com. — Jeremy Martin
Thu 7/27 - Sun 7/30
Clear to Partly Crazy

If there’s anything we Texans can do, it’s weather a rough storm – be it a real-life door-banger or turmoil that skews a bit more internally. In that vein, Jaston Williams asks us to hunker down with him in a storm cellar and bear the bluster of crazed relatives as well as literal tornadoes, all relayed to the audience with the sharp wit that first nabbed him fame in the show Greater Tuna. Continuing a collaboration that began with A Wolverine Walks into a Bar, Williams returns to the Classic stage with the San Antonio premiere of his latest one-man show Clear to Partly Crazy, in which he waxes poetic on time-honored Texan subjects of conversation in settings ranging from grandstands to mental institutions. $20, 8pm Thu-Fri, 3pm & 8pm Sat, 3pm Sun, The Classic Theatre of San Antonio, 1924 Fredericksburg Road, (210) 589-8450, classictheatre.org. — Kelly Merka Nelson
Fri 7/28
¡Gaytino!

In 1962, Dan Guerrero arrived in New York City eager to break into the world of show business. Decades before Latinos were projected to become the largest minority group in the U.S., Guerrero was often the lone Mexican American auditioning for roles on and off Broadway. The son of Chicano music icon Lalo Guerrero, he began working as a theatrical agent before establishing himself as a successful film and television producer. He is arguably best known for his credits on the groundbreaking El Show de Paul Rodriguez, which aired on Univision from 1990 until 1993. In 2004, Guerrero, then 65 years old, premiered his one-man show ¡Gaytino! at a Los Angeles community theater. Weaving together the history of both LGBT and Mexican Americans, the 90-minute performance features Guerrero as he navigates his identity as a gay Latino from early childhood to the present day. A work in progress at the time of its premiere, the show has since been performed at venues around the country, including The Kennedy Center’s Terrace Theatre. “It has evolved and changed with the times and matured just as I have all these years,” Guerrero recently explained to the Current. “I’m not the same person I was 10 years ago. San Antonio is really getting a new version of it — the whole tone is different.” $10-$25, 8pm Fri, Guadalupe Theater, 1301 Guadalupe St., (210) 271-3151, guadalupeculturalarts.org. — Marco Aquino
Fri 7/28
Canciones

It seems that, what with tricentennial fever in the air and all, folks have been possessed by a renewed zest for knowing, understanding, and celebrating the artists, and doers of all types, who laid the spiritual groundwork (if you will) for our city’s singular soul. This type of joyous bringing-to-light-of-history is, no doubt, what the organizers of The Pearl’s “Canciones” had in mind. A new summer concert series hosted at Pearl Park, “Canciones” is about showcasing local (SA and South Texas) voices and celebrating bygone talents at the same time, all in a relaxed, traditional Texas song pull style. This weekend’s event will feature Tish Hinojosa, Rosie Flores, Nina Diaz, Mike Ryan, and David Rodriguez, all performing and telling stories about songs that have helped shape the musical landscape of San Antonio. Free, 5:30-8:30pm Fri, Pearl Park, 303 Pearl Pkwy., (210) 212-7260, atpearl.com.
– James Courtney
Fri 7/28
Rey Lopez Birthday Bash

Since its 2012 premiere at the Bonham Exchange, the Rey Lopez Birthday Bash has never failed to bring the top performers from RuPaul’s Drag Race to the Alamo City. This year’s extravaganza pairs established fan favorites like season three alum Raja with newcomers such as Naomi Smalls and Valentina. Raven and Jujubee (aka Team Rujubee) and Puerto Rican beauties Yara Sofia and Jessica Wild all make the cut along with choreographer/dancer/weed enthusiast Laganja Estranja and Tatianna — fresh off a star turn on season two of RuPaul’s Drag Race: All Stars. With the reality show’s increasing popularity and its recent move to VH1, it’s hard to see an end in sight for these gender-bending, boundary-pushing queens. Before last year’s bash, Lopez told us, “I plan to go as long as I can.” If previous years are any clue, you can expect to see plenty of extreme lip-synching, death drops ... and perhaps a lap dance or two. Make sure to arrive early for the red carpet preview and fan mixer. $33-$55, red carpet and fan mixer at 8pm, show at 9:30pm Fri, Aztec Theatre, 104 N. St. Mary’s St., (210) 812-4355, reylopezentertainment.com. — MA
Sat 7/29
Vans Warped Tour

This stalwart summer tour brings together all the scene boys and girls, along with bands that continue to draw out the committed rock devotees. Developed by Kevin Lyman in 1995, Warped is the longest-touring music festival in North America. Now in its 22nd year, the tour has evolved to include bands of several different genres, yet still remains a rock-heavy production. This year’s tour features aggressive heavy metal acts like Atilla and Emmure, pop-punk rockers Bowling for Soup, fast-spitting rappers Watsky and Futuristic, the emo ballads of Hawthorne Heights, and pop artists like Jule Vera and the Plain White T’s. Returning to the stage this year are late ’90s rockers CKY, whose claim to fame include their musical contributions to Bam Margera’s ridiculous videos of dumb dudes doing dumb stuff. Food and beverage vendors and hydration stations will be available throughout the seven-stage festival grounds. Despite the annoying league of eyeliner laden, skinny jeans-clad teenage boys with over-processed hair, this event has basically become an American summer tradition at this point. $39.50-$49.50, 11am Sat, AT&T Center, One AT&T Center Pkwy., (210) 444-5000, attcenter.com. — KR
Sat 7/29
Paper Trail SA

Now in its third year, Paper Trail SA is a veritable wonderland for fans of unique printmaking and design, as well as those wishing to deck their walls or add to their art collection. Dedicated to contemporary works of art and design on paper, Paper Trail’s mission is to provide artists and onlookers alike “a one-of-a-kind experience aimed at connecting artists to collectors in a forum that celebrates the artistic process and the culture of design and printmaking.” And, we aren’t kidding when we say that, this year, the sheer scope and diversity of participating artists is as impressive as the individual artists themselves. Just a few of the 45 featured artists that we are looking forward to snagging some product from include locals Regina Morales (with that sweet pop-goth style), Cruz Ortiz (the man of the moment in Tex-Mex printmaking) and Jose Sotelo (maker of mystical images that meld the natural with the hyperreal). We’re also excited to see work from Puro Chingón Collective (Austin), Sable Mirerez (Chicago), James Beard (Houston) and Maritza Torres (Los Angeles). Aside from the dizzyingly stacked day market, you may want to plan to attend an exclusive preview/mixer night for Paper Trail, also at Brick ($25, 7-11pm Friday). $5, 11am-7pm Sat, Brick, 108 Blue Star, (210) 262-8653, papertrailsa.net. — JC
Sat 7/29
San Antonio Reggae Festival

A year ago, the inaugural San Antonio Reggae Festival (not to be confused with BobFest fka Marley Fest) went down at Rosedale Park, in the heart of a vibrant and proud community, to little fanfare. The event, however, was a success in many ways, and it’s back again for its sophomore year of celebrating reggae (and dancehall) music and the rich cultural heritage that surrounds it. Reggae is, after all, a music for proclaiming joy and lifting practitioners and audiences alike out of darkness. This year’s family-friendly affair will feature Jamaican acts like pioneering 1980s reggae/dancehall DJ King Yellowman, dancehall duo Tanto Metro and Devonte and more. Several SA-based reggae groups with also take the stage, including the Skunk Brothers and Saltwater Slide. Besides the live music, SA Reggae Festival 2017 will also feature drinks, food trucks, assorted vendors, and a special children's area. Canned donations will be happily accepted on behalf of the San Antonio Food Bank. $20-$30, 11am-11pm, Rosedale Park, 340 Dartmouth St., (210) 980-5634, facebook.com/sanantonioreggaefest. – JC