For the last 23 years, the San Antonio Film Festival has always done its own thing.

“We’re not the Toronto Film Festival or anywhere close to South by Southwest, and we’re not trying to be,” said Adam Rocha, director and founder of SAFILM, which runs through August 6 at the Tobin Center for the Performing Arts. “But we are trying to have fun. We are what we are, which is San Antonio. We’re pure San Antonio.”

Representing the city on an international scale, Rocha said, has included fostering relationships with filmmakers, which has kept SAFILM in the minds of people in the movie industry as an event he considers “inviting” compared to other fests.

“It’s all about fellowship,” said Rocha. “I think that’s what we do as a film festival. At other film festivals, you don’t have much access and it seems like you’re left out in the cold. We’re trying to do the opposite. We make friends and we keep friends.” Along with six days of screenings, SAFILM will also hold four workshops for filmmakers: “SAG-indie Filmmaking” with Darrien Michele Gipson (9:15am Fri, Aug. 4); “Making a Career in Show Business” with producer Marcia Nasatir (9:30am Sat, Aug. 5); “The Editor’s Cut: Feature Films vs. Docs” with Anne Goursaud (11am Sat, Aug. 5); and “Seal the Deal” with Hollywood agent Harry Ufland (11:30am Sat, Aug. 5).

For a full schedule of features and shorts screening this year, including films that are part of the coinciding San Antonio Children’s Film Festival, visit safilm.com. — Kiko Martinez

Click here for our full preview of this year’s SAFILM.

A UTSA grad currently working as a studio technician at Artpace, rising local artist Anthony Rundblade works within the parameters of printmaking but pushes the boundaries of the medium to unexpected destinations with stacked arrangements and compositions incorporating elements of collage. With exhibition credits that include solo shows at Agora Art, Haus Collective and the Southwest School of Art, Rundblade’s latest opened at Hello Studio in July and comes back into focus with receptions Thursday and Friday. Built around images plucked from old books, his “Cloak Dagger Parallel Meridians” plays with two seemingly unrelated themes (“coded communications and parallel realities”) and recalls both the poppy repetition of Andy Warhol and the circular hallmarks of John Baldessari. Beyond technical know-how, what shines in this show is Rundblade’s fusionist approach, which plays with scale and depth while putting a sculptural spin on the practice of printmaking. Free, 6-9pm Thu-Fri, Hello Studio, 1420 S. Alamo St., Building B #203, (210) 291-8640, hellostudiosa.com. — Bryan Rindfuss
Fri 8/4
“Lux Vetro”

From a “desire to create a meditative experience” with glass, a group of artists have been hard at work on the new exhibition “Lux Vetro.” As the Latin name meaning “light glass” suggests, these works combine intricate, colorful glasswork with various types/sources of light. For the philosophy junkies out there, it’s interesting to note that part of the inspiration for the show also derives from Plato’s “Allegory of the Cave.” Just as that ancient Greek genius wondered how to eschew the dominance of the five senses and grasp at essential truth, these works call us to contemplate if the beauty they possess is a trick of the strategic lighting or a fundamental quality of the altered rock. Free, 6-10pm Fri, Black Moon Gallery, 1420 S. Alamo St., Suite 106B, (512) 294-4268, facebook.com/blackmoonprint. — James Courtney
Fri 8/4
Chad Michaels & Derrick Barry

Within the realm of RuPaul’s Drag Race alums, performers Chad Michaels and Derrick Barry stand out for several of the same reasons: they both use (at least part of) their birth names, they both found substantial success before appearing on the reality series, and they’ve both perfected the art of celebrity impersonation. Crowned “Queen of all Queens” as the winner of RuPaul’s Drag Race: All Stars, Michaels has spent the last two decades impersonating Cher (complete with Bob Mackie-inspired costumes) in nightclubs, at special events and on TV spots ranging from Mad TV to the Comedy Central Roast of Gene Simmons. First entering the public eye on America’s Got Talent, season eight contestant Barry is arguably the world’s best known Britney Spears impersonator and famously caught the attention of the pop princess herself from the audience on The Tonight Show with Jay Leno. Fresh off another epic birthday bash that united nine RPDR queens, nightlife impresario Rey Lopez brings the duo to the Aztec for a double header hosted by local favorite Tencha la Jefa. $15-$28, meet and greet at 8pm, show at 9pm Fri, Aztec Theatre, 104 N. St. Mary’s St., (210) 812-4355, reylopezentertainment.com. — BR

For one weekend only, theater-goers can find themselves face to face with two of San Antonio’s most feared urban legends: Lechuza and the Donkey Lady. Only this time, they’ll be portrayed with a modern twist in Marisela Barrera’s second installment of the Tejana Trilogy. First performed as a one-woman show at Jump-Start Performance Company, Ruby Reds, Big Birds y Burras will get the full-ensemble treatment at this weekend’s performances. Written and directed by Barrera, the play takes place along the Texas borderlands, sharing the stories of characters born from local legends. Local audiences can expect to recognize iconic spots (like Saluté and Bill Miller BBQ) and be familiar with the play’s South Texas slang and Tex-Mex flair as the trilogy’s characters find their way home. $10-$15, 8pm Fri-Sat, 3pm Sun, Guadalupe Theater, 1301 Guadalupe St., (210) 271-3151, guadalupeculturalarts.org.
— Alejandra Lopez Gonzalez
Sat 8/5
Tone City Jam Fest 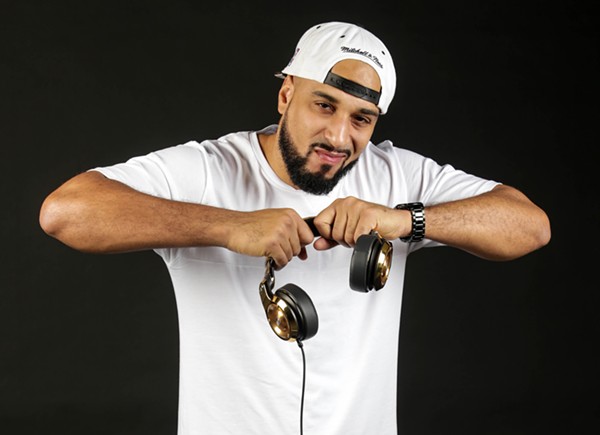 San Antonio hip-hop. To those who haven’t been paying attention, the juxtaposition of that particular genre and the Alamo City might seem odd ... at first. But it hasn’t stopped local rhyme-sayers and beat-makers from pursuing a particular style of music that resonates with them regardless of how often their shows get promoted by local media (help us help y’all change that). One of these shows is Tone City Jam Fest, which features a few of the best local rappers who are steadily creepin’ on a come up, including, King Tonyo, Blake, and Robbie Raps to name a few. For a taste of the quality talent SA’s been cookin’ up on the hip-hop end of our indie rock-heavy music scene, this is a show you’re gonna want to be at. With DJ Hella Yella, Lil Rarri, King Kyle Lee and IVY. $20-$40, 8pm Sat, Paper Tiger, 2410 N. St. Mary’s St., papertigersatx.com. — Chris Conde
Sun 8/6
Maria Bamford

After extensively developing the material in theaters and clubs across the country, Maria Bamford recorded her 2012 standup special The Special Special Special! in her own living room for an audience of two: her mom and dad. In her latest release, Old Baby, which The New York Times called “inspired gibberish,” Bamford — who also appears alongside Patton Oswalt, Zach Galifianakis and Brian Posehn in 2005’s The Comedians of Comedy and in Louis CK’s self-titled FX series and might still be best known for a series of Target holiday ads about which she has been openly morally conflicted (she joked she used the money from the commercials to redo her house in “shades of gray”) — performs in a larger variety of locations, à la Chris Rock’s Kill the Messenger, only instead of cutting between massive sold-out shows around the world, Bamford performs her endearingly goofy and incredibly vulnerable material at a bookstore, a bowling alley — and for herself in the mirror. Her delightfully Dada Netflix sitcom Lady Dynamite has her hopping timelines to relate her present-day issues with her past traumas. But wherever you catch Bamford, she’s thoughtful, hilarious and singularly herself, which is probably why Stephen Colbert called her “my favorite comedian on planet Earth.” $32, 8pm Sun, Aztec Theatre, 104 N. St. Mary’s St., (210) 812-4355, theaztectheatre.com. — Jeremy Martin
Sun 8/6
Bring It! Live

Miss D and the Dancing Dolls — stars of the hit reality show Bring It! — have embarked on a second tour showcasing their award-winning hip-hop majorette routines. The Dolls will storm the Tobin stage, stomping out never-before-seen high-octane routines in this encore of 2016’s sold-out live tour. Audiences will experience the full scope of these original dances and the electric energy the Dancing Dolls bring to the stage. Familiarity with the TV show isn’t required — even the most reality-averse among us won’t be able to resist the infectious beat of these flashy routines. $32.75-89.75, 7pm Sun, Tobin Center for the Performing Arts, 100 Auditorium Circle, (210) 223-8624, tobincenter.org. — Kelly Merka Nelson