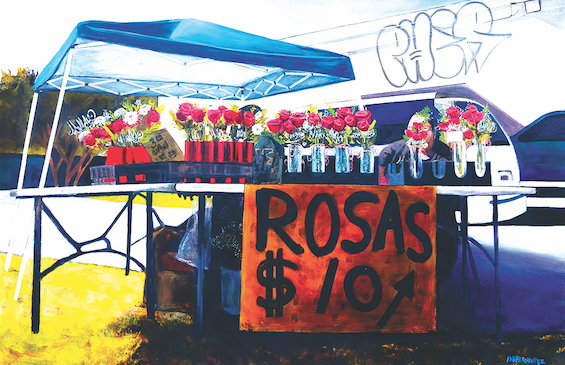 When Ana Fernandez and Ruth Leonela Buentello paint, they’re not just creating art — they’re shaping a legacy. For so long, Latin@s in America have felt a gaping hole where the genuine representation of their culture should be. All too often, there’s a marked discrepancy between their voices and the voices speaking over them.

But by painting narrative works that showcase the intimate inner-workings of Latin@ life, the San Antonio-based artistas are constructing a lasting space where their stories can be passed on without interruption.

“The one thing that I hope other [Latin@s] will see when they look at my work is, really, themselves,” says Fernandez, known for her detailed depictions of Chican@-centered environments, as well as her popular food truck Chamoy City Limits. “We haven’t been represented,” she explains. “We’re overlooked. We’re erased … And because we’ve been erased for so long, I want to make portraits through [the] landscape of [Latin@] entrepreneurs, as [they] exist today.”

As an entrepreneur herself, Fernandez understands the spirit of hard work and resilience behind the success of small-scale Latin@ businesses. Because she’s “living and breathing” the kind of business-centered lifestyle depicted in her work, the scenes she paints are especially visceral to her. In her upcoming exhibition “Eastside Westside,” she paints what the “American Dream” looks like for Latin@s in South Texas, and draws from her own experiences to help document the authentic perspectives of her San Antonio community.

The inspiration behind Ruth Buentello’s exhibition “Domestic Narratives” is mined from her everyday life as a Chicana. “The biggest influence [in my work] has been these experiences with my family,” she explains. “[Experiences] from around the house; some about joy, some about health, coping with family issues and just the things that we do together.”

Buentello’s work, recognized for its cultural richness, depicts the most intimate layers of Latin@ domestic life — from daily struggles with mental wellness and gender roles, to her own Chicana identity. In art school, Buentello’s mentors often discouraged her from creating pieces that addressed these issues for fear of being “boxed in” by her identity. However, she has since come to realize that it is through this identity that she finds her strength as an artist. “You have the power to relate to other people’s stories,” she says. “As Latinos, we have this connection with other Latinos. We’re different, but we all have similar experiences.”

Although it may seem impossible to hear Latin@ and minority voices above all the white noise in America today, this doesn’t mean that no one is listening. Because of artists like Fernandez and Buentello, a legacy of cultural understanding is being constructed, where pivotal experiences are shared and validated through solidarity with one another.

While both Fernandez and Buentello graduated from the School of the Art Institute of Chicago, they didn’t know one another until they moved back to San Antonio. Since then, they’ve become good friends and have been looking forward to displaying in a gallery setting together for over three years now. If you’d like to see “Eastside Westside” by Ana Fernandez and “Domestic Narratives” by Ruth Buentello, you can catch their side-by-side exhibitions at Galería Guadalupe from September 1 to October 6. The gallery will also host a group show curated by Fernandez, featuring works by artists Junye Butler, Marcy McChesney, and Rosa Fernandez.