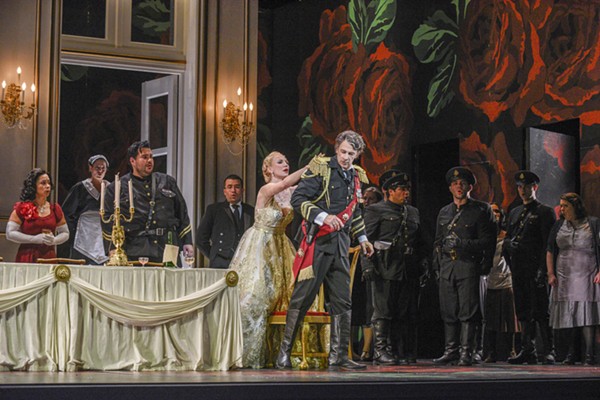 All hail … Macduff? That was certainly the buzz last night after Eric Barry’s extraordinary performance of the aria “Ah, la paterno mano”: Barry takes his solo moment — as the stunned Macduff learns that the other Macker has slaughtered his entire family — and makes the strongest possible case for this operatic treatment of Shakespeare’s play. For an instant, time stands still while Verdi — and Barry — mine the supernatural plot for its all-too-human consequences: a recognition of shame, and rage, and, above all, sorrow for the lives discarded in the wake of vaulting ambition. It’s an amazing rendition, and the crowd at the Tobin Center roared its approval.

The rest of the production — which originated at Glimmerglass, as originally directed by luminary Anne Bogart — has its moments, but also barrels along with a pace and intensity that sometimes robs the tale of its more reflective aspects: It’s less tomorrow and tomorrow and tomorrow than more corpses now! (The most obvious example is Macbeth’s curt response to his wife’s suicide. With nary a pause, he shoots back, “Life — what does it matter?” which is callous even by Macbethian standards. But on to the next scene!) James Schuette’s design places the action toward the end of WWII — replete with revolvers and old-timey milk bottles — but these choices sometimes work against the text. For instance, Macbeth claims that the chorus of witches appear to be more than women, but, um, they look exactly like women: oppressed, proletariat women. A whiz-bang gunfight really doesn’t work for the climactic duel — what’s the point of having a ‘dagger’ aria if you’re going to end the opera with a speeding bullet? — and surreal images of roses are supposed to represent the duality of beauty and danger but instead look like a quinceañera. (I’m all for the over-determination of literary symbols, but you can’t slather flowers all over The Barber of Seville and Macbeth! I hereby declare a moratorium on flora in San Antonio opera.) I admired the ending of the famous banquet scene — there’s a wonderfully off-kilter, Keystone Kops moment with guns pulled on everybody — but was less enthused by the set’s central, revolving manor wall, which seemed at times awkward, even intrusive.

But, at base, any opera is about the singing — and the singing is terrific. Metropolitan vets Greer Grimsley and Nadja Michael are a well-matched duo in this Scottish House of Cards, with Michael pulling out all the stops as a power-hungry social climber, and Grimsley discovering his inner Underwood. Bass Nathan Stark brings a round, lustrous tone to Banco, and indeed there’s good work by the entire supporting cast. (Chairman of the Board Mel Weingart even has a cameo as the doomed King Duncan.) The orchestra is conducted with panache by Sebastian Lang-Lessing, with efficient stage direction by Chrystal Manich. The chorus, under master Dottie Randall, sounded swell (and during Verdi’s nationalistic anthems, even swelling).

So: This is a musically vibrant Macbeth, saddled with a weird WWII conceit that doesn’t really have much to say about Mussolini or Downton Abbey. But buoyed by committed performances and abundant musicality, it’s certainly worth catching its final performance tomorrow (and only tomorrow, and tomorrow).