10 Things You Have to Do in San Antonio This Week

Wed 9/27
Laura Varela
Latinx Heritage Month continues at Trinity University with a film screening and panel discussion with documentarian Laura Varela. The San Antonio-based filmmaker will screen her doc As Long as I Remember: American Veteranos, which reflects on the stories of three Chicano vets who fought in the Vietnam War. In 2011, the Current likened the film to “listening to your own grandfather’s eye-opening war stories of heroism and heartbreak.” Along with Veteranos, Varela will preview her newest project, Raul Salinas: Poetry of Liberation, a film-in-progress on the late Chicano poet and activist. There will also be a panel discussion with Varela on her experience growing up on the border in El Paso and how it shaped her consciousness and how she believes art can heal and transform personal and collective traumas. “Our warriors have always been the first to be sacrificed in America’s wars,” Varela told the Current. “I want people to walk away with a confidence that our stories are being told. I want to make clear that our soldiers, writers and artists have their deserving place in the American fabric, and that Mexican American history is American history.” Free, 5:30pm-7:30pm, Trinity University, Ruth Taylor Recital Hall, One Trinity Pl., (210) 999-8211, trinity.edu. — Kiko Martinez

Wed 9/27 - Sat 9/30
Measure for Measure
University of Notre Dame’s touring Actors from the London Stage program returns to San Antonio, this time with a production of one of Shakespeare’s lesser known plays, Measure for Measure. Believed to be written midway through his career, Measure for Measure centers on themes of law and justice — in the play, the Duke of Vienna leaves the city in the hands of a judge, who follows the letter of the law with a vicious strictness. A hapless victim of his draconian policies is Claudio, who is accused of impregnating his beloved Juliet without a proper betrothal, which carries a punishment of death. As friends and family of Claudio seek to avert this fate, the judge’s true hypocrisy is revealed, and it takes some tricksy maneuvers to prevent injustice. The play will be presented in the company’s trademark style, as a five-person performance that embraces a minimal, black-box aesthetic not usually associated with productions of the Bard’s expansive work. The small cast also allows the performers to showcase their talents, as they play a range of characters (including some gender-bending at key moments), and keeps the focus on the words as they are evoked by the actors’ performance. $10-$18, 7:30pm Wed, 7:30pm Fri-Sat, UTSA Main Campus, Arts Building Recital Hall, One UTSA Circle, (210) 458-8253, colfa.utsa.edu. — Kelly Merka Nelson

Thu 9/28 - Sat 9/30
The Mystical Arts of Tibet
In what promises to be a special treat for those with interest in Buddhism, Tibet, and/or arts and culture in general, the Institute of Texan Cultures will play host to Tibetan monks from Drepung Loseling Monastery. The visiting cultural/spiritual ambassadors, whose tour is called “The Mystical Arts of Tibet,” will present a program, over several days, which includes lectures, ceremonies and the creation of a massive sand mandala (a symbolic, sacred “painting” of sand) on the main exhibit floor. Sanctioned by His Holiness the Dalai Lama, the goal of the tour (first launched back in 1988) is to promote world peace and healing through traditional Tibetan art forms and the discussion of Buddhist concepts. $10, 11am-5pm Thu, 9am-8pm Fri-Sat, noon-4pm Sun, Institute of Texan Cultures, 801 E. César Chávez Blvd., (210) 458-4011, texancultures.com. — James Courtney

As the child of Cuban refugees, stand-up comic Chris Garcia has some tips to offer via YouTube videos, including his instructions on how to harness the power of Santería to help you fold a fitted sheet. “Step one: Be oppressed for over 50 years,” begins one video. (You thought it had something to do with angles, didn’t you?) His on-the-money description of Telemundo’s over-excited soccer coverage or his blow-by-blow recitation of the lyrics to “La Bamba” are not preparation enough for his mind-melting rendition of what his fathers’ impression of his standup act might be. “Little white-washed motherfucker, I can’t believe it, mang … This kid got so smart he became stupid again, you know?” he exclaims in his father’s voice on his 2016 album, Laughing and Crying at the Same Time, and his perspective always remains just as sharp and relentless, especially when directed at himself. When he gets outside himself, there is no way to contain him. $17, 8:30pm Thu, 8pm &10:15pm Fri-Sat, 8pm Sun, Improv San Antonio, 849 E. Commerce St., (210) 229-1420, rivercentercomedyclub.com. – Jeremy Martin 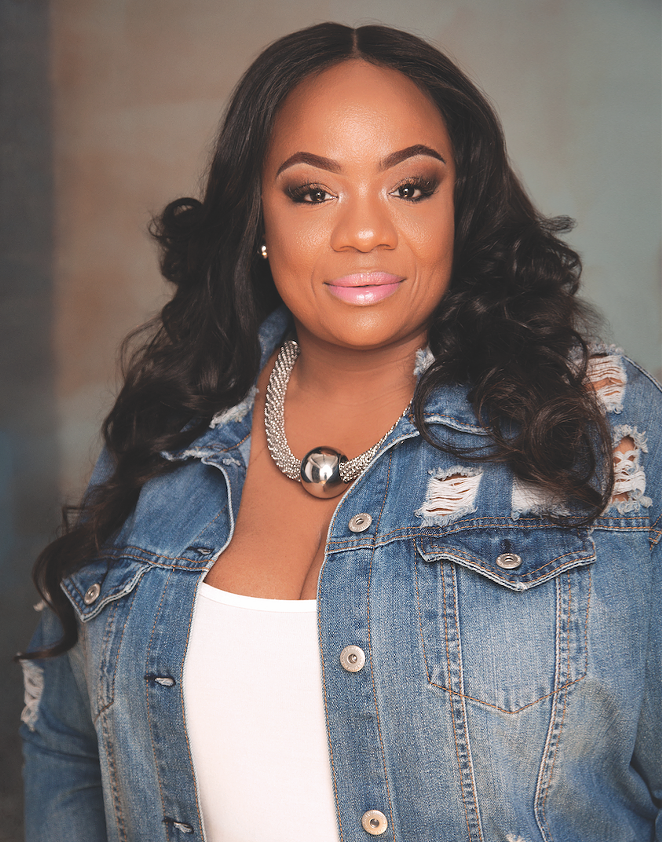 If you’re wondering why you gotta call her Ms. Pat, listen to her describe, on the Comedy Central web series This Is Not Happening, the way her formidable rack (aka “Life-Saving Titties”) rescued her from the consequences of a crack deal gone south. “What’s wrong, this too real for y’all?” she asks, after copping to stealing $100 a day from the cash register while working at McDonald’s, and if you can’t deal with this unfuckwithable stand-up comic’s brutal honesty at this point, you better turn back now. “The only thing I don’t like about being a mom is having kids,” she says, before launching into a routine about her children that would make Louis C.K. blush, and that’s when you realize there is no substitute for experience, and since you ain’t gotta call her by her dealer name, “Rabbit,” you probably oughta call her by her stage name, Ms. Pat, because now she deals in a rarer and more precious commodity, the truth. $16, 8pm Thu, 8pm & 10:15pm Fri-Sat, 7pm Sun, Laugh Out Loud Comedy Club, 618 NW Loop 410, (210) 541-8805, lolsanantonio.com. — JM

Fri 9/29 - Sat 9/30
Cult Classic Convention
Halloween comes a whole month early to Bastrop with the inaugural Cult Classic Convention, featuring vendors and celebrity guests from a handful of horror and cult movies, not to mention one special attendee some might consider a bit fucked-up at this type of event. First the film talent: Scheduled to appear are genre favorites like Sid Haig, pictured (The Devil’s Rejects), Angela Jones (Children of the Corn V), and a host of actors from the 1974 original Texas Chainsaw Massacre, including Edwin Neal (Hitchhiker), William Vail (Kirk), Allen Danziger (Jerry) and John Dugan (Grandfather). Since the original Texas Chainsaw was shot in the area, attendees might find some time to do their own tracking of fictional killer Leatherface around the I-35 corridor, but we wouldn’t recommend it. Then, for whatever reason, Cult Classic invited Buell Wesley Frazier, the man who drove Lee Harvey Oswald to the Texas School Book Depository on November 22, 1963, the day Oswald assassinated U.S. President John F. Kennedy. If this was a history or true-crime conference, sure. But a horror convention? In bad taste, organizers. $20, 5-9:30pm Fri, 11am-7pm Sat, 11am-5pm Sun, Bastrop Convention Center, 1408 Chestnut St., Bastrop, (512) 332-8980, cultclassicconvention.com. – KM

Sat 9/30
100 Thousand Poets for Change
Words and the thoughts that are put into them make a difference. Thus, as something of an antidote to all the hateful/ignorant discourse in the world, 100 Thousand Poets for Change — a yearly reading event focused on themes of positive change and open to all levels of poets — goes beyond its obvious symbolic and cathartic purposes and is capable of making an actual difference. Spearheaded by local poet/activist Viktoria Valenzuela in 2011, the event this year adopts the timely theme of human rights for San Antonio’s immigrant population. The event, which includes an open mic portion as well as musical performances, will feature readings from a host of accomplished poets, including Dr. Carmen Tafolla, Sheila Fiona Black, Amalia Leticia Ortiz, Anel Flores and Wendy Barker. Free, 11am-6pm, Centro de Artes, 101 S. Santa Rosa Ave., (210) 784-1105, facebook.com/100tpcsatx. — JC

Sat 9/30 - Sun 10/1
Contents Under Pressure
Fans and practitioners of graffiti and graffiti-inspired artwork will once again converge on The Paintyard (a longtime hub for local aerosol artists and the culture that surrounds them) for Contents Under Pressure (CUP), a two-day celebration that this year follows a theme of “Ancient Civilizations.” Part-showcase, part-competition, part-party, the fest will feature live work and work on display from a bevy of local and national artists, including Amber Kurosky, John Michael Gill, Skye Amber Sweet and Nik Soupé. CUP will also include a slew of vendors, food, b-boy battles and live music from roots/funk crew Deltaphonic, CZR WVE, several DJs and more. A Saytown tradition, CUP provides attendees an intimate and raw look at a wide variety of art at various stages of the creative process and artists in a various phases of development. Free, 3pm Sat-Sun, The Paintyard, 1216 Hoefgen Ave., (210) 229-1707, tpy-urbancolors.com. — JC