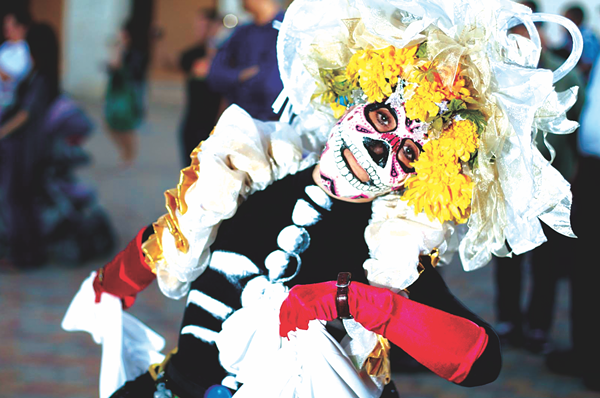 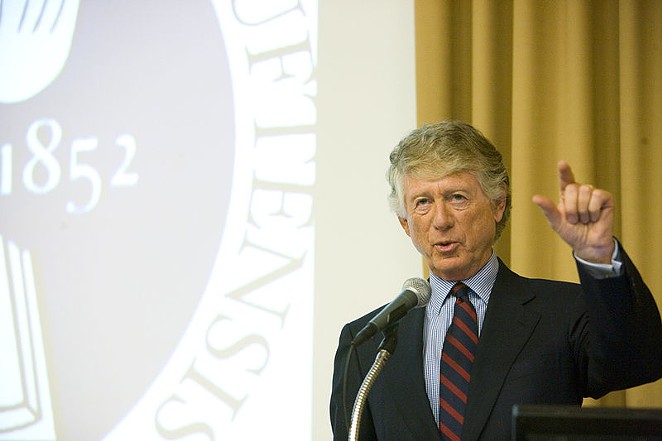 Wed 11/1
Ted Koppel
If you flicked on ABC at any point in the last 50 years, you’d likely find Ted Koppel sitting behind the news desk. Koppel, who joined ABC in mid-’60s, has been around for nearly every major news story since. He was one of the first to interview Lyndon Johnson after the JFK assassination, covered the civil rights marches sparked by Selma’s Bloody Sunday, reported on the Vietnam War from Hong Kong, tackled Watergate, the Iran Hostage Crisis and the nuclear arms race. In 1980, Koppel became the first host of ABC’s Nightline — a role he held until 2005. More recently, he’s also known as the guy who tore Sean Hannity a new one on CBS. This Wednesday, Koppel’s coming to Trinity to speak on the future of journalism in conjunction with the university’s Distinguished Lecture Series. And as someone who’s seen a fair amount of journalism’s past, Koppel’s probably the most experienced source up to the task. Here’s the pitch: “Koppel provides insights into the evolution — and in some cases regression — of how we get our news. With humorous rapport and personal anecdotes, Koppel takes audiences into the future, helping them to better understand how the news affects every aspect of our lives.” Free, 7:30pm, Trinity University, Laurie Auditorium, One Trinity Place, (210) 999-8406, events.trinity.edu. — Alex Zielinski

Thu 11/2
Spurs vs. Warriors
According to oddsmakers in Vegas, the Warriors entered the NBA season as the highest favorited team to win a championship in any sport, ever. Golden State steamrolled the Spurs in the Western Conference Finals last summer, on the way to their second title in three seasons. With Tony Parker and potentially Kawhi Leonard still on the mend, San Antonio phenom Dejounte Murray and a reinvigorated LaMarcus Aldridge will be tasked with keeping offensive pace with Steph Curry and company. The 21-year-old Murray has been a breath of fresh air at the point and Aldridge is off to a strong start, after his offseason heart-to-heart with head coach Gregg Popovich. Newcomers Rudy Gay and Joffrey Lauvergne will get their first crack at the defending champs in this early season litmus test for the Spurs. $43-$2,632, 7pm, AT&T Center, One AT&T Center Pkwy., (210) 444-5000, attcenter.com. – M. Solis

Proving that big things often come in small packages, the University of Texas at Arlington artists’ collective MACHINE’s group show “CUFT” comprises a diverse array of works (encompassing everything from glass and glitter to found objects and photography) that “occupy no more than a cubic foot of space” (free, 6-9pm Thu-Fri, Terminal 136, 136 Blue Star, (210) 458-4391, art.utsa.edu).

Developed in response to “an increase in the policing of female bodies and body autonomy that has occurred in both politics and the media in recent years,” the four-woman showcase “Persona” seeks to “normalize discussions of sexuality, mental and reproductive health, and everyday discomfort that women may face” (free, 6-9pm Thu, Corporate Gallery, 116 Blue Star, (210) 219-8640). Over at Haus Collective, local artist Forton Keeeman presents a new series of paintings (free, 7-10pm Thu, Haus Collective, 108 Blue Star, (512) 923-9704, facebook.com/hauscollectivesa).

The latest installment of the Presa House Pop Up exhibition series, “La Ciencia Avanza Pero Yo No (Science Advances But I Do Not)” brings Houston-based artist Ángel Lartigue to FL!GHT for a San Antonio debut that’s anchored by the interactive installation Sub Scientist Booth — which invites spectators to donate DNA samples (read saliva) to an artistic experiment that’s part altar, part laboratory — but also includes previous works such as the photographic series “Self Portraits as I Were Muertx” (free, 6-11pm Fri, FL!GHT Gallery, 134 Blue Star, facebook.com/presahouse). — BR 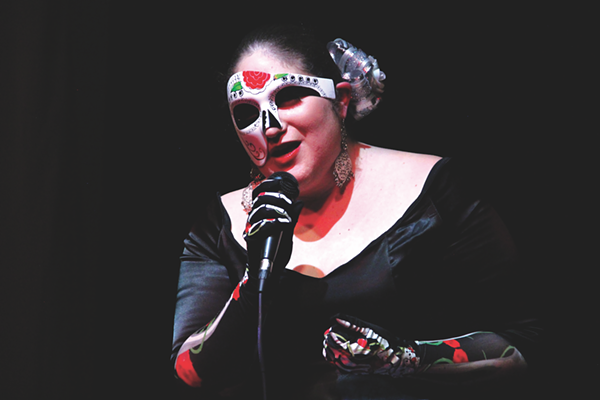 Thu 11/2 - Sat 11/4
Muertitos Fest
For its 11th annual Muertitos Fest, a culturally relevant celebration of art, life, and death, the staff and students of SAY Sí will be presenting three days of activities/displays including “student art, altars to honor the departed, family folk art workshops, food booths, an artisan mercado as well as live cultural performances highlighting local dancers, musicians and entertainers.” This year’s fest, which takes the Mexican Revolution as its theme, will also include the revealing of two large-scale sculptures created over the summer in collaboration with Colectivo Ultima Hora, a talented team of artists from Mexico City. Proceeds from the opening night of Muertitos Fest, the only day for which there’s a cover charge, will benefit SAY Sí’s efforts to foster students’ “artistic and social skills in preparation for higher educational advancement and professional careers.” Aside from all the student performers and artists, the fest will also features musical performances from talented local acts Chisme, Grupo Frackaso and Chulita Vinyl Club. Free (opening night $35-$40), 7-10:30pm Thu, 6-10pm Fri, noon-4pm Sat, SAY Sí, 1518 S. Alamo St., (210) 212-8666, saysi.org). — James Courtney

Fri 11/3
Tom Segura
Let’s cut to the chase: If you have dentures, will you be admitted to Tom Segura’s No Teeth No Entry Tour? Of course, the Aztec’s guidelines make no such stipulations for attendees who are all gums, and Segura’s stand-up act, chronicled on albums such as 2012’s White Girls with Cornrows can be merciless toward its intended targets, but signs indicate he is just kidding — probably. His podcast — recorded with his wife, fellow comic Christina Pazsitzky — is called Your Mom’s House but they don’t mean anything by that, maybe. In the intro to his 2016 Netflix special Mostly Stories, he ridicules his home turf of Los Angeles before heading off to Seattle to perform, but that’s just an affectionate jab, right? Consider said special contains compassionate quips such as: “I don’t even want to lose weight to live long or be healthy. I don’t. I just want to make fun of fat people again, and know for sure that they’re fatter than me.” Say, wait a minute … OK, maybe he’s kind of a dick, but he’s a funny one. $25-$35, 7pm Fri, The Aztec Theatre, 104 N. St. Mary’s St., (210) 812-4355, theaztectheatre.com. — Jeremy Martin 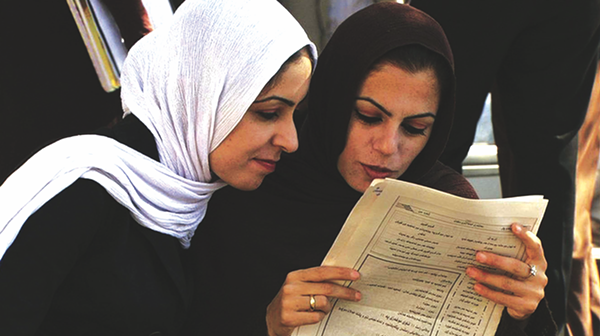 Sat 11/4
Quest for Honor
Filmmaker and producer Mary Ann Smothers Bruni will host a screening of her critically acclaimed 2009 feature documentary Quest for Honor, which follows the story of former teacher and activist Runak Rauf as she and other activists and journalists investigate the honor killings taking place in the tribal regions of Iraqi Kurdistan. According to research released by the Immigration and Refugee Board of Canada, offenses against a family that are considered breaking their “honor code” include sex outside of marriage, inappropriate dress, being a victim of rape, contact with a man outside of the family, and marrying without permission from family. In the Kurdistan culture, it is believed that the woman or girl who committed the “offense” may be killed to restore a family’s honor. Quest for Honor was shortlisted for an Academy Award in 2010 and nominated for the Grand Jury Prize for World Cinema-Documentary at the Sundance Film Festival. “The stories that we eventually filmed came about slowly,” said Bruni in her director’s statement. “We did not craft them. We discovered them. Along with the exploration and discovery, we documented and we filmed.” Free, 2pm, Our Lady of the Lake University, Thiry Auditorium, 411 SW 24th St., (210) 434-6711, ollusa.edu. – Kiko Martinez

Sat 11/4
Diwali
Launched in 2009 as means to partake in the Hindu festival of lights and strengthen San Antonio’s ties with its sister city of Chennai, India, Diwali illuminates La Villita the first Saturday in November. A lively affair that celebrates the Hindu belief that good ultimately triumphs over evil, the annual favorite routinely brings together nearly 15,000 people for an evening combining Indian cuisine, cultural performances, artisan vendors, remarks from local dignitaries, a river parade and a traditional diya ceremony that sets floating candles adrift along the River Walk. After noshing on classic and fusion-minded fare (from India Oven, Mangoes, Bombay Salsa and Biryani Pot, among others) and browsing vendors specializing in saris, jewelry, artwork and henna tattoos, guests can take in a stage show featuring dances representing 13 Indian states, get moving to DJ beats or Bollywood Zumba in Plaza Juarez, and stake out a spot for the grand finale — a full-on fireworks extravaganza (9:15pm). Free, 5-11pm, La Villita, 418 Villita St., (210) 273-2200, diwalisa.com. — BR

Sat 11/4
Ignacio Montoya Carlotto
Imagine you’re a 36-year-old musician with a well-established career as a pianist, composer and music teacher. You have a name: Ignacio Hurban, and music albums to your name, but you always felt you might be someone else. So in 2014, and with the help of Abuelas de Plaza de Mayo (the group founded in 1977 by grandmothers of Argentina’s babies whose parents had been kidnapped and disappeared by the military dictatorship of 1976-83), Hurban submitted to a DNA test. The result confirmed his suspicions: he became “grandson #114,” the latest person recovered by the Abuelas, but there was a twist: he was also the grandson of Estela B. de Carlotto, the current president of Abuelas. The son of Laura Carlotto, who was 23 when kidnapped and died shortly after giving birth, and Oscar Montoya, his musician dad, the now-renamed Ignacio Montoya Carlotto continued his musical career and added San Antonio as one stop on his U.S. tour, just him and his piano (his latest jazz septet album, Sep7eto, was released in 2015). He’ll perform a mix of originals, tangos (anything from the classics to Astor Piazzolla) and Argentine folclore (think Cuchi Leguizamón). A short reception will follow the performance, but remember: you need to buy your ticket in advance via phone (number below). Tickets will not be sold onsite. $15 suggested donation, 7:30pm, Mexican Cultural Institute, 600 Hemisfair Plaza Way, (830) 613-6622, ignaciomontoyacarlotto.com. — Enrique Lopetegui