Thu 11/16
Jak Knight
At this point probably best known for his voice-over work — as good-natured D-Leaguer Denver Levins in NBA2K17’s career mode or as DeVon on Netflix’s animated series Big Mouth, for which he also works as a staff writer — stand-up Jak Knight was named a New Face at 2015’s Just for Laughs. While many comics are already in their mid-30s with more than a decade in the industry by the time they’re named a “New Face” at the Montreal comedy festival, Knight seems much less far removed from the pubescent school kids on Big Mouth, but you can tell his new face will most likely one day be an old famous face in comedy by the way he reacts when he isn’t doing well on stage. That’s not to say Knight, whose good-natured riffs on our shared reality (sex, politics, police brutality, etc.) take a circuitous, almost-spontaneous-seeming route to the heart of the matter, doesn’t land killer punchlines, but that he’s unafraid to take a less-traveled, sometimes even highly warned-against road to get there. And when the audience begins to pull back is exactly when he leans in and grins. Get used to him, and enjoy the ride. $16, 8pm Laugh Out Loud Comedy Club, 618 NW Loop 410, (210) 541-8805, lolsanantonio.com. — Jeremy Martin

Thu 11/16
‘The Upside Down’
Creative duo Las Lloronas is calling all binge-watchers to don their hazmat gear and venture into “The Upside Down” for a Stranger Things-themed art show benefitting Autism Speaks. Local artists and vendors — including Casas Ink, Violet Serpentine and The Wednesdays — will descend upon Brick with their best and strangest wares for a night celebrating Netflix’s breakout hit, which premiered its second season in late October. Feel free to grab yourself a drink at Brick’s bar and jam out to an early ’80s playlist, but keep an eye out for flickering lights and unexplained slime … the demogorgon isn’t guaranteed to make an appearance, but you may want to grab your nail bat on the way out of the house. You know, just in case. $5, 6-11pm, Brick at Blue Star, 108 Blue Star, (210) 262-8653, facebook.com/laslloronas. — Kelly Merka Nelson 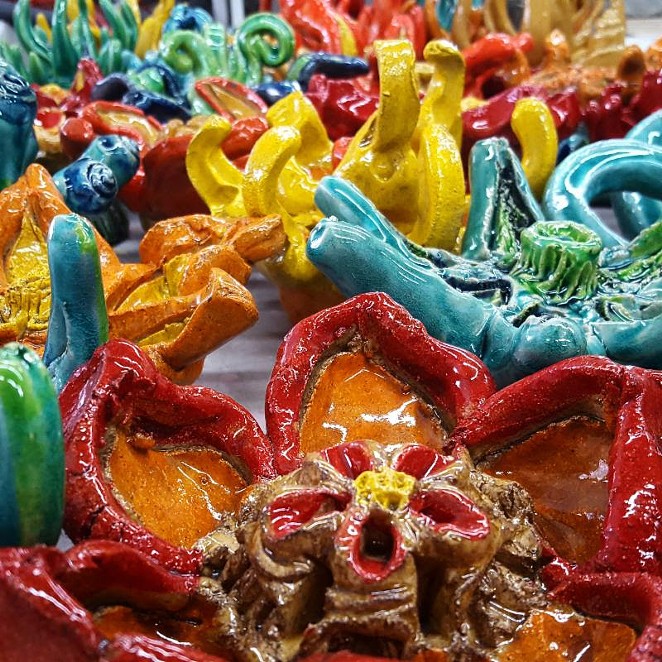 Thu 11/16
Art in the Garden
The San Antonio Botanical Garden continues its commitment to the arts via its Art in the Garden initiative. By bringing works of art, some permanently and some temporarily, into its confines, the garden is able to add another dimension of aesthetic joy to the experience it provides, and, as a bonus, to invite visitors to look at its botanical collections in fresh ways. Opening Thursday, and on view until February 18, the garden’s latest artistic foray will bring the clay sculptures of local ceramics master Diana Kersey to the Lucile Halsell Conservatory. Kersey’s work, which readers may know from her totem-like, nature-worshipping installation at VIA’s Five Points hub, or one of her other public art contributions around town, is uncannily organic, celebrating natural shapes and the patterns that emerge from the generous chaos of the Earth herself. Kersey, who will bring an array of objects large and small for this installation, is one of the most imaginative potters around, somehow commanding the clay with the playful precision of a brilliant painter. $9-$12, 5:30-7pm, San Antonio Botanical Garden, 555 Funston Pl., (210) 536-1400, sabot.org. — James Courtney

Thu 11/16 - Sat 11/18
Shakespeare on the River: The Taming of the Shrew
The Magik Theatre presents a celebration of Shakespeare with a performance of The Taming of the Shrew, believed to have been written around 1590. The production marks Arkansas Shakespeare Theatre’s second visit to San Antonio, the previous being at last year’s Shakespeare in the Park. The play, which is performed as part of a prank on a drunk, surrounds male competition for a bride and the manipulation of Katharina, an assertive and quick-witted daughter of a lord in Padua, Italy. Because her younger sister, Bianca, isn’t allowed to marry until Katharina has found a husband, Bianca’s suitors try to find a man for Katharina. Enter Petruchio. Once wed, he tricks and breaks down Katharina in various ways with the goal of eventually “taming” her to be the proper submissive wife (you know, the “desirable” kind). Meanwhile, the competition over Bianca gets tangled, adding nicely to the display of archaic gender politics. Free, 7:30pm Thu-Sat, La Villita, Arneson River Theatre, 418 Villita St., (210) 227-2751, magiktheatre.org. — Kelsey Valadez

Fri 11/17
Spurs vs. Thunder
Just a few seasons ago, the Oklahoma City roster boasted three MVP candidates in Kevin Durant, James Harden and Russell Westbrook, who claimed the NBA’s highest individual award last season. With Durant chasing titles in Oakland and Harden causing mayhem in Houston, the Thunder constructed a new big three in the offseason, landing Carmelo Anthony and Paul George via trade. OKC’s latest triumvirate may not be as talented as their original, but they are arguably more intriguing. Along with Westbrook, Anthony remains one of the more mercurial talents in the game and, aside from injury, George has yet to refine his NBA narrative. Spurs versus Thunder has been a must-see matchup since 2012’s Western Conference Finals, and this latest iteration should not disappoint. $42-$1,579, 7pm, AT&T Center, One AT&T Center Pkwy., (210) 444-5000, attcenter.com. — M. Solis

Fri 11/17 - Sun 11/19
Zonarte
Formed three decades ago with a mission “to support and strengthen Chicano/Latino culture and identity,” Centro Cultural Aztlan is many things at once — an early champion of Día de los Muertos celebrations, steadfast supporter of emerging artists, an anchor of the Deco District and a community hub for everything from the annual Mole Throwdown to themed exhibitions and the seasonal favorite Zonarte. The first of many artisan-focused markets on the horizon, the weekend affair tempts shoppers and browsers with unique prints, paintings, sculptures, jewelry, textiles, folk art and other one-of-a-kind offerings from nearly 30 artists and makers, including Sandra Estrada, Esther Guajardo, Iliana Mendez, Lupe “Spike” Muñoz, JD Morera and Sylvia Tijerina. Free, 6-9pm Fri, 10am-6pm Sat-Sun, Centro Cultural Aztlan, 1800 Fredericksburg Road, Suite 103, (210) 432-1896, centroaztlan.org. — BR

Sat 11/18
TEDxSanAntonio
Most know the nonprofit organization TED (Technology, Entertainment and Design) as a source for engaging and intellectually stimulating talks covering a wide range of subjects, or as they bill it, “ideas worth spreading.” TEDxSanAntonio has selected 16 speakers to share such talks in 18 minutes or less on this year’s theme of “Now Is the Time.” Speakers include Eric Cooper, President and CEO of the San Antonio Food Bank; Sonny Melendrez, radio personality and inspirational speaker; and Janet Trevino (pictured), professional platonic touch and cuddling specialist. Cooper will deliver a talk titled “Volunteer Prozac,” covering the mental health benefits of volunteering, while Melendrez’s talk, “Intentional Enthusiasm,” mirrors his book The Art of Living with Enthusiasm. The book aims to guide readers through ways to incorporate enthusiasm into their daily lives. Trevino’s talk will present the healing effects of physical touch and how to access it. Other speakers’ talks will cover dance, healthcare, politics, gastronomy and more. $45-$100, 10am-5pm, Witte Museum, 3801 Broadway, (210) 357-1900, greatstuff.tedxsanantonio.com. —KV

Sat 11/18
Texas Body Paint Competition
Since its launch in 2010, Beyond the Canvas has grown into an arts organization associated with nearly 100 body painters, special effects artists, models, photographers and other creative types. Founded by art and music enthusiast Tomas Vasquez and sponsored by the Avenida Guadalupe Association, the collective regularly comes together for showcases, competitions and special events in San Antonio (as well as Louisiana, South Carolina, Georgia and New York) and also works with area charities such as the Believe It Foundation, a nonprofit dedicated to “the inclusion of kids with physical challenges into the lives and experiences of their typical peers.” Through their outreach efforts with the Believe It Foundation, BTC has touched the lives of kids like 18-year-old Xavier Sanchez. Born without arms or legs, Sanchez recently visited the Beyond the Canvas studio and found a new level of confidence after being transformed with body paint. Following a theme of “Dreams and Delusions,” the outfit’s 10th annual Texas Body Paint Competition brings together 25 body paint artists and 25 “live canvases” for a creative battle with guest judges from the reality series Skin Wars, performances by hoop artists, the Afro-Brazilian troupe Capoeira Luanda and stand-up comic Cleto Rodriguez, and more than $1,000 in cash prizes. $25-$50, 7pm-midnight, Guadalupe Theater, 1301 Guadalupe St., (210) 271-3151, beyondthecanvas.org. — BR