Much like the markings of a tattoo artist, Richard Armendariz’s carved paintings symbolize both pain and beauty. With surgical precision, Armendariz applies an adapted power tool onto his brilliantly painted wooden panels, bringing to light a plethora of mythological creatures, figures and text by way of crosshatched incisions.

This month, Ruiz-Healy Art presents “Tell Me Where It Hurts,” a new exhibition comprising the artist’s signature carved paintings and large-scale woodblock prints. The title of the show is inspired by the common phrase heard at the doctor’s office and refers to both a physical and mental state. “It’s about the body but it’s also about the mind and the psychological state that a person is in,” Armendariz explains. “Also, as a Latino, it revolves around the idea that we don’t always ask for help … we don’t go to the doctor or therapist. It’s funny to tell someone that you’re in therapy if you’re a Latino because it goes against this macho attitude.”

A professor of art at the University of Texas at San Antonio, Armendariz was selected to participate in Blue Star Contemporary’s Berlin Residency at Künstlerhaus Bethanien in 2013 and became the Doseum’s inaugural resident artist in 2017. His work is represented in the collections of the Denver Art Museum, the San Antonio Museum of Art and the McNay Art Museum.
Born in the bordertown of El Paso, Armendariz draws from popular culture as well as indigenous and Mexican-American traditions to create his large-scale paintings that reflect his Southwest upbringing.

In Cono de Fuego, Armendariz portrays himself leaning forward against a turbulent red sky as he receives the traditional Mexican remedy of a candle melting in his left ear. He wears a T-shirt celebrating The Cramps, the 1980s-era psychobilly punk band. A common home remedy used to heal various ailments, Armendariz’s cono bears the epitaph, “Revolution is in the air.” Here, Armendariz draws parallels between personal narratives and the current political climate.

Also noteworthy in this exhibition are Armendariz’s homages to his progenitors: the African-American artist Kara Walker and fellow El Paso native Luis Jimenez.

In Hun, Armendariz depicts Walker as she stares into the distance with various images of crocodiles, tears and a palm tree carved into the figure’s face. 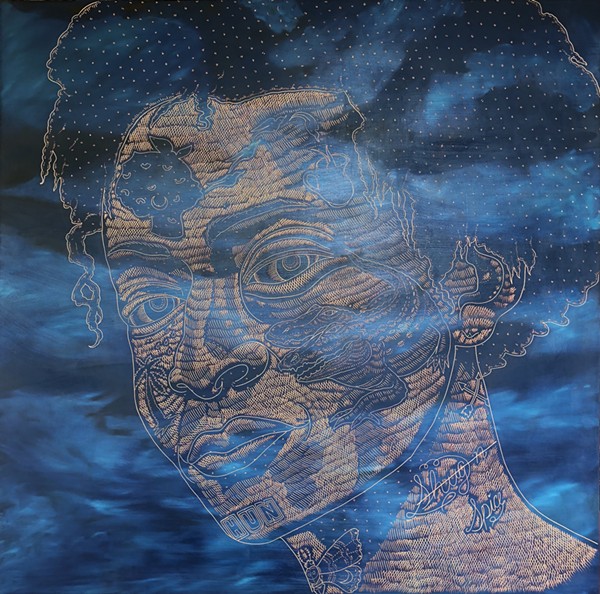 Of Walker, Armendariz says, “She’s always been a gigantic influence on my work both conceptually and formally … She is someone I hold in high esteem … what I like to do is learn about the people who inspired me. All of that, I think is very fascinating.”