3 of This Year's Essential Books Offer Solace Without Being Escapist

How much of 2017 did you spend scrolling through newsfeeds until your eyes felt like they would shrivel and fall from your skull? Being prone to despair, I found solace in literature. When overwhelmed by news, think pieces and dezinformatsiya, literature speaks to us through a backchannel, its slowness and deeply considered language helps form our finer feelings and better process the world.

In Martin MacInnes’ Infinite Ground (Melville House, October 2017), an unnamed inspector in an unnamed Latin American city suspects the missing person he’s after (Carlos) has literally disintegrated. Following a trail of fabulist microbiological clues from the office of the unnamed corporation where Carlos worked to the outlying rainforest, the inspector finds no less artifice in his eco-tourism than he did in the city (where the corporation hires actor-workers to improve productivity). He is ostensibly looking for Carlos when the Lynchian storyline unravels and the inspector becomes absorbed, quite viscerally, in the nature around him. But is it real? One chapter late in the book simply lists “suspicions, rumors, links,” about “what happened to Carlos.” One rather convincing theory suggests the whole investigation is a delusion. Against this backdrop of bleak assumptions — human hubris, colonialism — MacInnes creates rich patterns, themes and repetitions that make the book feel like its own self-contained ecosystem. I was both delighted and alarmed to be immersed in the story’s narrative confusion, the logic of which felt all too real. 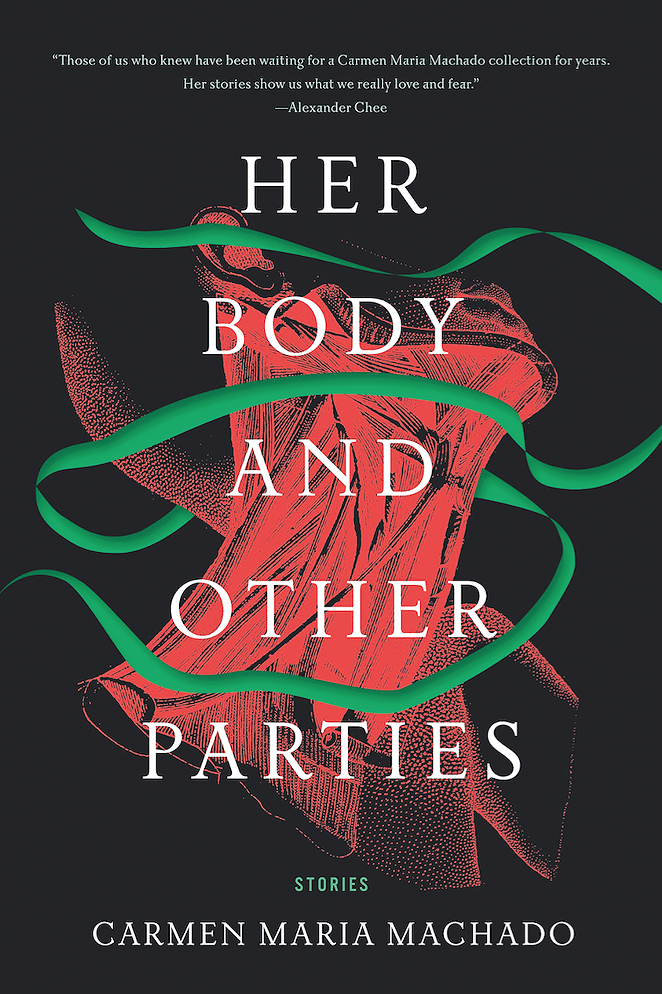 Another fiction through which we might digest reality, specifically our national reckoning with toxic masculinity, is Carmen Maria Machado’s Her Body and Other Parties (Graywolf, October 2017), a blend of horror, erotica and fairytale that makes for an original, stylistically cohesive, steadfastly queer book of stories. Machado artfully employs the surreal to reflect the psyches of victimized women, as in “Difficult at Parties,” in which the narrator, recovering from a sexual assault, hears the thoughts of porn actors; or the ways women are minimized, as in “Real Women Have Bodies,” in which the world’s women are disappearing into thin air; or the womanly stereotypes imposed on women, as in “The Husband Stitch,” a spirited twist on an old cautionary tale that … actually just Google it. In these stories, the body is the central site of not only trauma, but pleasure. In “Inventory,” for example, a deadly pandemic takes a backseat to the narrator’s sexual conquests and desire to connect with humanity, even as it falls apart. Deadpan delivery of lines (like “The moral of that story, I think, is that being poor will kill you.”) create surprising moments of dark comic relief, which is helpful when gazing into the cracked mirror of society. Overall, these characters are not defined by trauma, but perseverance.

And sometimes the shroud of metaphor must be shed altogether. Sometimes a book must frankly remind us that the border-jumping Mexicans we’re told to fear are often Honduran, Guatemalan and Salvadoran children putting life and literal limb on the 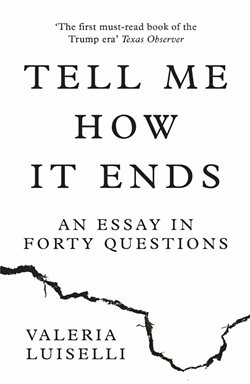 line to escape countries U.S. policy helped destabilize. That’s the headline through which we enter the humanity of Valeria Luiselli’s Tell Me How It Ends: An Essay in 40 Questions (Coffee House, April 2017). The book recounts Luiselli’s experiences as a volunteer interpreter for migrant children arriving in the U.S. Her job is to ask these freshly traumatized children 40 questions designed by lawyers to determine whether or not they might qualify for asylum. Though 100 percent real, the formality of this process reads like absurdist fiction. Imagine the difficulty of interpreting a 5-year-old’s response to “Do you feel safe?” and the pressure of knowing the wrong answer could cost them so much. Luiselli thinks of her own children and their privilege, expresses fears and frustrations, and even guilt over the way the country of her birth (Mexico) treats migrants just like the U.S. does — as unwanted criminals. She finds some redemption in her college students, whom she engages to help local migrants succeed in a new and frightening country, and in Manu, a Honduran migrant whose story is still uncertain but closer to a happy ending than most.

The toll 2017 took on my mind is nothing compared to the renewed attack on the bodies of my fellow (and aspiring) citizens. These three books, with their focus on bodies in various states of danger, remind us that contemporary literature can be an escape without being escapist, that we read to think deeply about the world around us, and hopefully, after putting the book down, we’re moved to act.